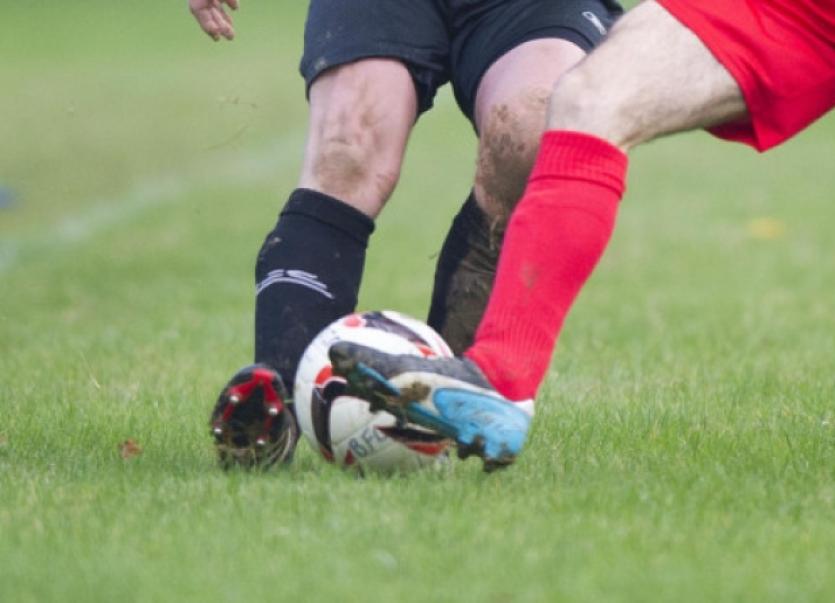 Vee Rovers got the perfect start and were ahead after ten minutes when Shane McGrath rose highest in the box to head home from a corner kick.

The home side tried to get back into the game after this, but were often second best in the exchanges until they carved out an equaliser after half an hour when Darren Murphy’s cross was finished by  Brendan Boland at the back post.

It turned into a scrappy game without any clear cut chances for either side after this, with both teams resorting to long range efforts. In extra time, the visitors had the better of the play again, and Redmondstown had to call on keeper Danny O’Mahoney to make a few saves while in the second period, the home team had the best chance to win it late on when Ciaran Brett came close.

Rovers eventually scraped through in the shootout with Redmondstown missing four of their five spot kicks, to crash out of the competition.

Fourth Division Slieveardagh United gave Premier League Peake Villa the fright of their life when they pushed them all the way before finally succumbing in extra time in their Munster Cup tie on Sunday. The game was played at a rip roaring pace throughout and both teams had chances to score before the game finished goalless. With penalties beckoning in extra time however, the home side finally broke the deadlock with a goal from Pippy Carroll to put themselves into the next round of the competition, where they will be glad to have gotten past a very brave Ballingarry outfit.

The two Division One teams faced off in the Munster Cup and it was Rosegreen Rangers who eventually held their nerve the better to advance to the final round before the open draw.

Despite being short a number of regulars, Rangers came out of the blocks at speed and were in the lead after only three minutes, through a strike by Niall O’Brien.

The home side were rattled by this, but got back into the game in the 20th minute when Shane Murphy levelled matters. This was how the game went to the break, and in the second period, the home side took the lead 15 minutes in when Jonas Kerr struck home.

They only held this lead for five minutes however, as Eoin Byrnes continued his good goal scoring form by levelling the game up again. Ten minutes before the end, Owen Farrell hit Cahir’s third, and this looked like being the decisive goal, until deep in injury time, Byrnes struck again for the visitors to send the game to extra time.

There were no further goals in regulation play, and Rosegreen made the most of their reprieve by winning out in the shootout by four goals to one.