A dozen points for Damien O’Brien as Eire Og advance 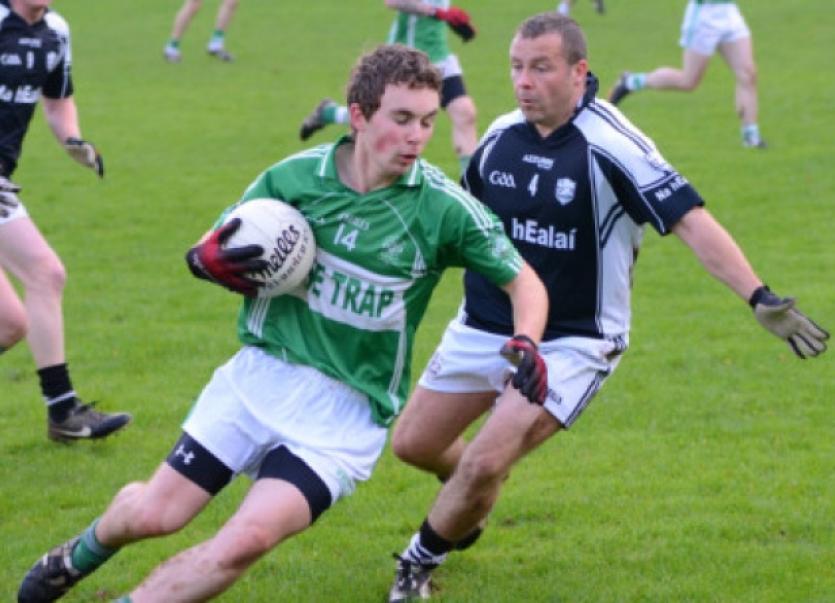 Damien O’Brien stole the show on Sunday afternoon last in Drombane as he fired Eire Og Annacarty/Donohill to victory over JK Brackens in the County Senior Football Championship.

Damien O’Brien stole the show on Sunday afternoon last in Drombane as he fired Eire Og Annacarty/Donohill to victory over JK Brackens in the County Senior Football Championship.

Scoring all but one of the Eire Og points before retiring through injury late on, he proved to be the crucial difference between the sides.

Of the ten frees that were presented to O’Brien he converted nine with consummate ease. The only one that failed to register on the scoreboard was outside his range and against a stiff breeze. Added to his placed ball exploits were three points from play that were equally impressive, two off the right and one off his left from close range.

The crucial score came five minutes after half time as Kevin Fox scored the game’s only goal. This was a well- manufactured move where Donal O’Dwyer used his searing pace before handpassing to Fox. After having an opportunity thwarted by Mervyn Bradish from similar range in the first period, Fox steadied and finished with aplomb off his right boot.

This proved to be a superb bounce back from Eire Og after the disappointment of losing the West Final. They are well organised, disciplined and work hard as team. Brackens will no doubt be disappointed as they work the ball well up the field but then lose all sense of purpose as they approach shooting range.

The first half was a very tight affair and Eire Og took the lead early as Damien O’Brien converted a free and followed that a minute later by taking a pass from a 45 and kicking over from 35 yards, as the Brackens defence was asleep to the situation. As the Annacarty men operated with only two inside forwards this allowed John Costigan to abandon his full back post for the Templemore side and he was first to register for his team with a high powerful kick off his right.

As the half developed O’Brien kept tagging on the frees to push the West Tipperary side ahead while Colin O’Riordan returned with three frees of his own, along with a close range effort from Eoin Fitzpatrick, to leave the scores tied at 0-5 each at the break.

With the help of the breeze Brackens were favourites to push on and Eire Og were expected to play the containing role in the second half. However the opposite proved to be the case, as the speed of Donal O’Dwyer and clinical finishing of O’Brien in the inside line caused all sorts of trouble for the opposition.

Brian Fox converted the goal moments after the break and O’Brien floated over a couple of free kicks and suddenly a seven-point gap had emerged.

From this moment on Eire Og just had to sit and absorb, as Brackens failed to make any great inroads into the heavily populated defence that stood before them. O’ Brien converted a couple of points from play, one with either foot, while Colin O’Riordan and Padraic Bourke responded for the Templemore men but they could not bridge the gap.

Dean McEnroe came closest to raising a green flag for Brackens as he rattled the post with only a minute remaining but Eire Og finished in style, as Conor O’Brien roamed forward to conclude the scoring with a fantastic left-footed effort.