Tipp collapse in second half as big lead disappears 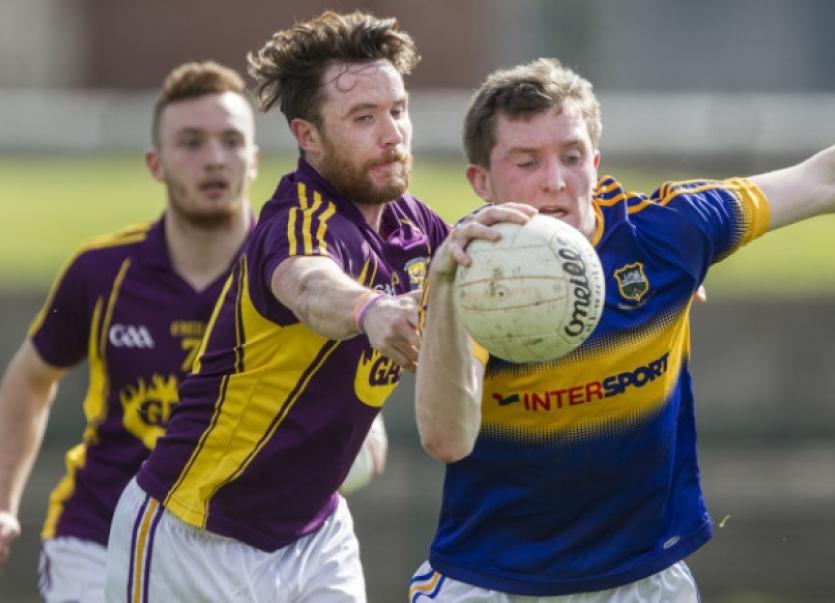 Tipperary’s Division 3 League campaign came to a crashing end at Clonmel on Sunday last with a three-points defeat to already relegated Wexford.

Tipperary’s Division 3 League campaign came to a crashing end at Clonmel on Sunday last with a three-points defeat to already relegated Wexford.

Even allowing for the not insignificant facts that there was nothing at stake for Tipperary, and that they were fielding a greatly weakened team, the manner of the defeat will be very disappointing to Peter Creedon’s side.

At half-time Tipperary led by 2-8 to 0-6 and looked set to record their fifth league win from a seven-match campaign. However a second half collapse in which they registered just four points to Wexford’s 2-9 saw the Model County capture only their second win from seven. For former Tipp All-Ireland minor winning manager David Power, it was a morale boosting win as his Wexford side now prepare for their Leinster championship campaign.

Played in championship-like weather on a fabulous Easter Sunday the game was slightly above “challenge match” billing as all league matters of promotion and relegation were irrelevant to the outcome. Pride and perhaps a player’s claim to a championship jersey were the only matters on the table.

Early exchanges were even and after a quarter of an hour the sides were level at 0-2 each with Tipp’s scores from first-time starter Dean Lonergan and a Conor Sweeney free matched by a pair of points from Eoghan Nolan and Wexford captain Ciaran Lyng.

An excellent goal on 16 minutes by Peter Acheson after a move involving Sweeney and George Hannigan gave Tipp a big boost.They kicked on in style and in the next nine minutes added five points from Sweeney (2), Sean Flynn, Ger Mulhaire and Peter Acheson. In reply Wexford had two points from top forward  Ciaran Lyng to leave the score at 1-7 to 0-4 on 25 minutes.

A second Tipp goal after a quickly-taken Conor Sweeney free, converted by George Hannigan (despite a desperate effort to save from corner-back Pauric O’Keeffe) put Tipp nine clear after 27 minutes.

After Ger Mulhaire had his second of four points on an excellent day for the versatile Arravale Rovers player, Tipp had a chance to extend the lead to double figures by half-time.

A minute before the break George Hannigan put Dean Lonergan through only to be pulled down in the square. Barry Grogan’s penalty effort came back off the crossbar and even a second fisted attempt went wide. What might have been an out-the-gate 11 points half-time lead was a ‘mere’ eight points advantage at 2-8 to 0-6 for Tipperary.

An badly conceded goal inside 40 seconds of the restart when Tipp defenders were caught out of possession gave Wexford the spark they needed. Credit to Wexford’s Kevin O’Grady for doing his job well.

A second goal for Wexford in the 46th minute by top-scorer Ciaran Lyng when cheekily catching Tipp custodian Colum Nugent off his line suddenly had the scoreline back to a two point game at 2-9 to 2-7.

The next five points were all for the “Purple and Gold” with some excellent scores from play including efforts by O’Grady (2), Tiarnan Rossiter, Ben Brosnan (free) and Nolan.

Tipp’s only score in this battering was a point from Ger Mulhaire four minutes after the re-start. Indeed it was Mulhaire who also came up with Tipp’s second point in the 58th minute to end 19 scoreless minutes for the home side.

Brian Mulvihill, perhaps the most effective of the Tipp subs introduced, pointed in the 62nd minute to reduce the deficit to the minimum as a shell-shocked Tipp tried to respond. However, it wasn’t to be as Wexford finished the stronger with late points by Naomhan Rossiter, Jim White and a Ben Brosnan ‘45’ to just another Brian Mulvihill point to see the visitors deservedly win by three in the end.

If Peter Creedon was asking hard questions of his extended panel in Sunday’s game he got plenty of answers to ponder, and some weren’t the ones he really wanted. George Hannigan, Peter Acheson and Ger Mulhaire though were blameless in defeat.