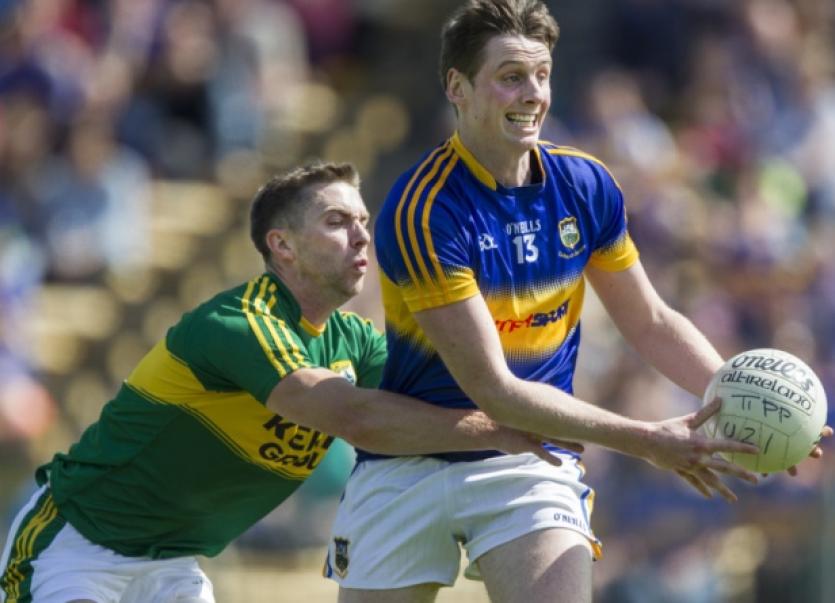 The big statement that Tipp seniors were hoping to make to the Gaelic football world that they have arrived as a real force has been put on hold for now at least.

The big statement that Tipp seniors were hoping to make to the Gaelic football world that they have arrived as a real force has been put on hold for now at least.

In a much anticipated provincial semi-final on Sunday last at Semple Stadium against the Munster and All-Ireland champions Kerry, Tipperary faded after the perfect start. What was a two-points half-time deficit was extended to eight before ‘The Kingdom’ saw out the last quarter of an hour in relative comfort to win by 2-14 to 2-8.

And while it might be unfair to describe it as a gulf in class, there still remains a sizeable gap in standards between the sides. Kerry won more comfortably than the six points final scoreline suggests. At the final whistle they were both surprised and relieved at the manner in which they had achieved their win in light of the battle they had expected and the poor start that they made on the day.

For Tipperary it will be more the performance than the result which will hurt.  Everything was set up for a “crack” at Kerry and everything was perfect on the day for such an effort - conditions were ideal, a huge “football” crowd paid in to watch, and then the whirlwind 1-1 to 0-0 start within the first four minutes. It looked too good to be true. And as is often the case when it looks like that, it proved to be just so.

What will gall Tipp the most when they sit down to examine this defeat is that they brought about their own downfall as much as Kerry did.

A total of 13 wides over the 70 minutes, eight of them in the second half, was profligacy in the extreme. Kerry, in contrast, kicked five wides in the game. Some of the Tipp wides were unbelievable and inexcusable at this level and their effect went beyond the scoreboard. Each wide seemed to suck confidence from the side as well as letting the champions off the hook when the opportunity was there to punish them, particularly early on.

And while it might seem that the opening 10 minutes were special for Tipp after which they led 1-2 to 0-1, it was in that period that they could have done so much more damage had they availed of all their opportunities.

On the downside in this opening period Tipp kicked four wides, while free-taker Conor Sweeney also shied away from a kickable free from inside 40 metres to play the ball backwards which resulted in nothing. Bottom line is when you get chances - which invariably are few against the top teams - you must take them. Tipperary didn’t.

Eventually Kerry settled and when they did they quickly asserted themselves with midfielders Anthony Maher and Bryan Sheehan gaining a stranglehold around the middle.

A point for Tipp by Ger Mulhaire in the 11th minute was answered by a Michael Geaney effort for Kerry and when Bryan Sheehan kicked his first free of the day in the 17th minute it was still 1-2 to 0-3 for the home team.

Disaster then struck for Tipp. A poor kick-out from Evan Comerford was gathered by Johnny Buckley and processed by Colm Cooper and Bryan Sheehan before Barry John Keane slipped the ball past Comerford to give the champions a lead they would never thereafter relinquish.

A huge Kerry roar followed in the 20th minute with ‘The Gooch’s’ first point of the day as Kerry began to up the tempo. A further excellent point from 40 metres by Bryan Sheehan increased the lead before Kerry struck for their second goal. A long delivery from wing-back Jonathan Lyne wasn’t cleared and Paul Geaney availed of the opportunity to beat Evan Comerford from close range for a 2-5 to 1-2 advantage on 29 minutes. From four points up to six points down it was getting very serious for Tipp and they needed to respond.

To their credit they did so instantly. A move through the middle by Philip Austin gave Michael Quinlivan a goal chance and for the second time the Tipp full-forward delivered, this time with a punched effort to the net.

Quinlivan’s productive first half continued when earning a 32nd minute free which Sweeney converted and suddenly the lead was back to two.

A Colm Cooper free was answered by a Jason Lonergan fisted point, the lively Clonmel Commercials forward making a good impact following his replacement of the injured Robbie Kiely after half an hour.

Going in at the break just two points down, Tipp were very much still in the game despite not having scored between the 11th and 30th minutes and despite having lost midfielder George Hannigan with a facial and groin injury after 20 minutes.

Disappointingly the second half was bossed by Kerry and within 11 minutes, five unanswered points had them seven clear. Indeed just 15 seconds after the restart Paul Geaney, who was otherwise impressive all day, blazed over the bar when an open goal presented itself.

Tipp’s first and only point from play in the second half came 16 minutes after the restart with the hard-working Brian Fox coming through the middle to score.

By the 55th minute Kerry had stretched the lead to 2-13 to 2-5 as their manager  Eamonn Fitzmaurice used the opportunity to give match time to all his subs including ‘Footballer of the Year’ James O’Donohgue, and returned Aussie Rules player Tommy Walsh.

All Tipperary could manage in the latter stages were three points from placed balls from Conor Sweeney and substitutes Barry Grogan and Kevin O’Halloran as the game faded out before an official attendance of 11,248 with thousands of schoolchildren admitted free.

For Tipp it’s back to the drawingboard now with a Round 2 qualifier awaiting against possibly Tyrone,  Armagh, Down/Wexford or Louth.

Much better will be needed the next day but on Sunday the defensive unit did well with Alan Campbell and Peter Acheson in particular prominent. Steven O’Brien carried a huge workload all day (with Hannigan gone early and O’Riordan curtailed with an early ankle twist) while in the forwards Brian Fox was everywhere and Michael Quinlivan took his chances well.