Skill of slick Kerry forwards too much for Tipp juniors 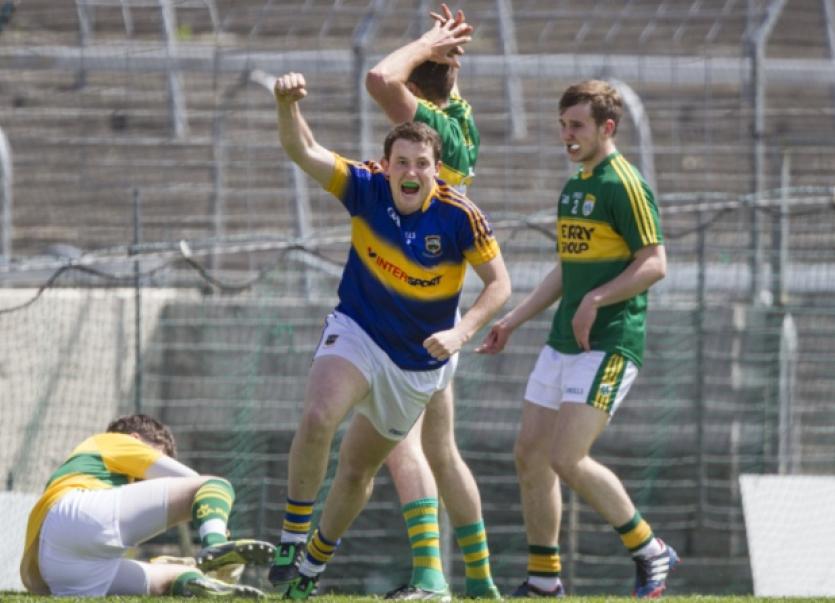 A slick fast-moving forward line led by Jeff O’Donoghue at No. 11 tormented Tipp all day long. And bar a brief couple of minutes early in the second half when the home side led, the Kingdom were never in trouble in this curtain-raiser to the senior clash between the same counties.

The big difference between the sides was in the forwards. The pacier and more inventive Kerry contributing 1-9 from play over the hour while the Tipp forwards’ only score from play - bar their goal - was a late point from Kevin Fox.

The other talking point was the 10 minute first half hold-up when a sickening clash of heads between Alan O’Riordan of Tipperary and Kerry’s Tadhg Morley, saw the JK Bracken’s player stretchered off the field. His younger brother Colin suffered a similar fate in the National League game against Sligo earlier in the year. Thankfully Alan was making a full recovery by game’s end.

Tipp midfielder Aldo  Matassa opened the scoring after 22 seconds but soon Kerry were exerting their superiority with superb long range points from Jeff O’Donoghue (2) and Conor Cox to lead 0-3 to 0-1 after quarter of an hour.

In the 21st minute Tipp suffered a huge setback. Martin Dunne lost possession around midfield and from the resultant turnover Jeff O’Donoghue set up Thomas Hickey to goal to put the visitors five clear.

A period of good pressure from Tipp in the lead up to the break yielded four points, all from placed balls, two frees by Kevin Fox at corner-forward and a free and a 45 from  Cahir’s Dean Lonergan.

Ger Halley who started at wing-back put in a fine first half and was unlucky not to goal in the 22nd minute when getting on the end of a move he started himself.

Tipp got a tonic start to the second half when Donagh Leahy made space for Dean McEnroe and still with some work to do the Templemore man man jinked in to blast to the net. Surprisingly Tipp now led for the first time since the opening minute. The advantage would be brief though and Kerry rattled off the next five points with scores from play from forwards Jeff O’Donoghue, Alan O’Donoghue, Conor Cox and an excellent point from midfielder James Walsh.

Tipperary midfielder Aldo Matassa then chipped in with his second point for Tipp but the respite was brief.

An intricate movement from defence, passing through several hands, ended with corner-back Dan O’Donoghue blasting to the net to leave it 2-9 to 1-6 half-way through the second period. There was no way back for Tipp from here.

All Tipp could manage in this period were two points from the ever-honest Kevin Fox, one from a free and the other from play with almost the lack kick of the game, when played through by  Dominic Walsh.

For Tommy Toomey’s side this is the end of the road for this year. They can look back on a hard-fought win over Waterford plus the experience gained from measuring up against a far more skilful Kerry side. On the day Jimmy Feehan and Ger Halley were the most industrious in a hard-working defence. Aldo Matassa had his moments around midfield including two points from play while upfront Kevin Fox and Dean McEnroe with his well-taken goal stood out most.