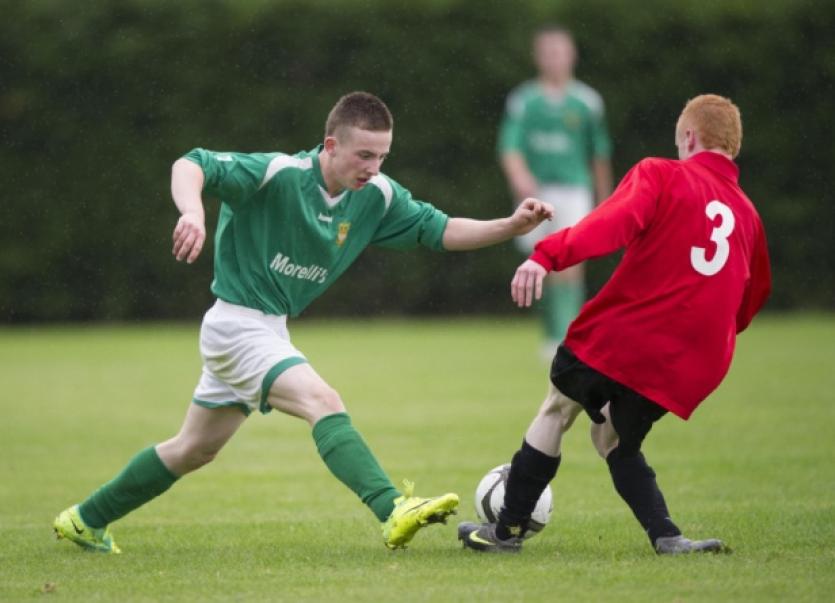 The visitors opened the scoring within ten minutes through James Hickey’s speculative shot from outside the box. The same player was then denied a chance to double his tally when Rosegreen keeper Killian Ryan made a fantastic save from a penalty on 22 minutes.

In the second half Killenaule took a firm grip of the game. They were helped though, as Ger O Connor put through his own goal just before the hour to double the away sides advantage. Killenaule’s Davy Noonan increased the lead with a powerful drive from outside the box in the 70th minute, before James Hickey completed his hat-trick with two goals in five minutes, the second from the penalty spot atoning for his earlier miss.

Wilderness Rovers who are returning to First Division fare after a couple of seasons in the Premier Division served notice that they are going to be a very tough proposition this season with a very comfortable Shield victory over Two Mile Borris in Clonmel on Sunday afternoon. They also look to have unearthed another gem in striker Ger Kennedy who gave a man of the match performance with some beautiful football. New arrival Youcef Brahimi finished from ten yards out to give the home side the lead goal three minutes before the break.

Kennedy finally got his reward by doubling the home sides advantage on the hour mark. He then scored the goal of the day when he chipped the advancing goalkeeper in the 68th minute to give the Wilderness a very comfortable victory.

The early exchanges were tough but fairly fought, and it took a quick thinking James Power to latch onto a rebound from a free kick to put the home side in front midway through the first half. They held onto this lead until half-time, and in the second half, they eventually doubled the lead when again Davy Ryan was fastest to a rebound, this time from a penalty. Try as they might, Galbally attacked ferociously, but never really created any clear cut opportunities, and suffered cruelly when Timmy Heffernan caught them cold on the break to effectively finish the tie. Cullen were rampant now and scored a fourth and final goal with five minutes left, for a good win and advance to the next round of the competition.

Tipperary Towns second team made the short trip to St Nicholas in this second round tie and emerged victorious in a very evenly fought battle. Chances were at a minimum as defences seemed to be on top. The away team broke the deadlock though close to half time when ace poacher Stephen Quinn got on the end of a delightful ball from Deano Buckley and slotted it into the bottom on the St Nicholas net. The second half mirrored the first, with half chances being the order of the day, but no more goals from either side. Tipperary Town advance, but both teams will have to improve if they are to be challenging for silverware later on in the year.