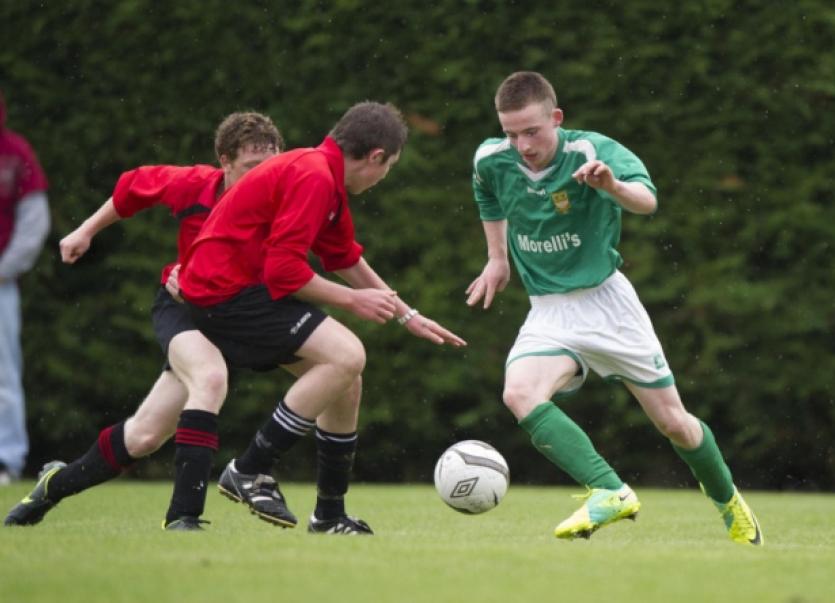 Saints always had the edge here against an under strength Cashel side that never looked like they could compete with Saints running and guile. Russell Quirke was lively from the beginning and shot wide after a good Richie Ryan run on three minutes, before the home team took the lead two minutes later when Darren Lynch finished well from a John O’ Brien run behind the defence. Danny Pledger then replaced Paul Hoare for Cashel Town, causing the away team to rearrange an already shaky defence. This almost resulted in the away team going further behind when goalkeeper Philly Doherty was forced into making a great save from the rampant Quirke on thirteen minutes. It was 2-0 on 17 minutes when James Walsh turned in another well-placed Quirke cross from the right wing. It was the 23rd minute before the away side had any real shot in anger, when Gavin Browne was unlucky to shoot wide when the goal beckoned. Darren Lynch of St Michaels went close twice just before half time in the 40th and 45th-fifth minutes but they went to the break two goals in front.

Cashel came out livelier in the second half and on forty-eight minutes Michael Mackey shot just wide. It seemed that the home team had gone down a gear, and they weren’t making the kind of chances that had characterised the first half. Saints did have a penalty on the hour however when Quirke was upended in the box but James Walsh’s spot kick hit the post and went wide. It wasn’t long however before St Michaels rectified this miss and John O’ Brien made it 3-0 within five minutes leaving the Saints coasting. Substitute Shane McGrath then made an immediate impact with a powerful shot to make it 4-0 on 73 minutes from a John O’ Brien cross. Cashel finally pulled one back five minutes later when Joe Breen found Michael Mackay in space and his cross was well struck to the net by James Harding.

Clonmel Town have been going through a period of transition over the last few seasons, but on the evidence of their performance on Sunday, it looks like they are finding a winning formula which will take them a long way towards honours as the new season progresses. They opened very strongly against a Cahir team who were promoted to Premier status as champions, but who have gone through a number of personnel changes in pre-season. In the opening period the home team took the game to Cahir and carved out a number of half chances to set the tone for the game. They eventually gained their reward when Michael Quinlivan, returning after some time away, got on the end of a cross from Paul Shanahan, to put the hosts a goal to the good. Cahir Park’s Jason Hahessy scored a penalty to leave it level at the break.

Cahir most likely felt that luck may be on their side, and retreated into a defensive pattern in the opening minutes of the second half, hoping to hold onto what they had. It was a poor tactic however, as inviting a by now rampaging Clonmel Town onto them, lead to them going behind for a second time as Clonmel midfielder Shane Flynn beat a number of Cahir defenders before coolly slotting home the home team’s second goal. Whatever chance Cahir had of coming back from this setback was crushed minutes later when Clonmel doubled their lead as a well-placed pass from John Shanahan opened the visitors defence for Conor Conneally to finish to the net. The final half an hour then settled into an almost dull pattern with neither team really looking like scoring again, until two minutes before the final whistle, Quinlivan put a perfect cross onto the head of David Mc Grath to put the finishing touches on a very competent Town performance. After the game the Clonmel management professed to be very pleased with how their team performed and now with a good mix of experienced players and a sprinkling of youngsters, feel that the strengthened squad will go a long way towards pushing for local and national honours this year.

The most anticipated game of the opening day pitted the newly crowned league champions against their town rivals in a well contested derby. Celtic will be keen to build on last year’s winning season, and showed on Sunday that they will once again be difficult to overtake, while Old Bridge will also be hoping to build on some very fine performances last year to push on towards title ambitions of their own. As in all derby games, the opening period was frantic with both teams having some half chances without ever really threatening their opposition’s goal.

The first goal of the game was scored by Celtics David Joyce who got on the end of some very good passing movements through the Bridge defence. This knocked the away team back, and Celtic began to dominate especially in the midfield area, which was increasingly controlled by Celtic’s Andrew Cosgrave. However, despite all the pressure they were unable to add to their lead and went to half time with only a slender advantage.

The second half followed the pattern of the latter stages of the first, with the home team again dominating possession, and now adding even greater attacking threat from their rampaging full backs. Fans favourite Darren Byrnes was behind a lot of the good work in this area, and was pivotal in increasing the Celtic lead, when he was part of a free flowing move that finished with Joyce popping up again to double the lead on the seventieth minute. This looked like finishing the game as Celtic began to look a lot more comfortable but they were knocked from their reverie when Old Bridge counter attacked with ten minutes on the clock and reduced the lead to a single goal from a goal by Martin Mc Cabe. This set up a grand finale as Old Bridge tried to get an equalising goal, while the once comfortable Celtic defence began to look more and more ragged.

The critical moment of these last few minutes came when Old Bridge thought that they had gotten their equaliser, only to find that the referee had already stopped the game in their favour for a foul earlier in the attack. Alas, the resulting free did not lead to a score and the champions survived any late scares to register a good win on their first league outing of the season.

This was a good result for Clonmel Celtic as the visitors look likely to be a handful for many teams this season, and Celtic will be hoping that once the new season settles down, they will be in a position to continue advancing towards honours as they have been doing over the past few years.

Both teams had a number of new additions to their squads, and while they both may have different ambitions for themselves by season end, they served up some fine fare in a well-attended game. Peake were quickest out of the blocks creating some good chances, but they had to wait until the twenty-fifth minute to break down their stubborn opponents. The lead goal came from a James Morrissey corner which was headed to the net by John Lawlor. This sparked the visitors into action and they had a number of chances to get back on terms, before the break. However, the home defence was up to all thrown at it, and kept their team in the lead as they headed for the half time tea.

The second half begun with Villa re-asserting their dominance and they pinned Glengoole back for much of the opening period of the half. They then doubled their lead through a fantastic strike by Eoin O’Dwyer almost exactly on the hour mark. This relaxed the home team and they settled back into defence again as Glengoole threw caution to the wind in trying to get a foothold back into the game. It wasn’t to be however, and they could probably feel aggrieved when Villa broke away from a Glengoole corner with five minutes on the clock, to finish the game with a well taken Gary Lyons goal. Whether or not United deserved to lose by three is irrelevant.

What the result did show was that in stepping up to Premier league football, you have to be clinical and take the smaller number of chances that come to you.

Peake Villa have always been masters of efficiency in this regard, and on their performance Sunday morning, could be dark horses to build on last year’s cup success, and go very close to regaining the league title they won only a few seasons ago.