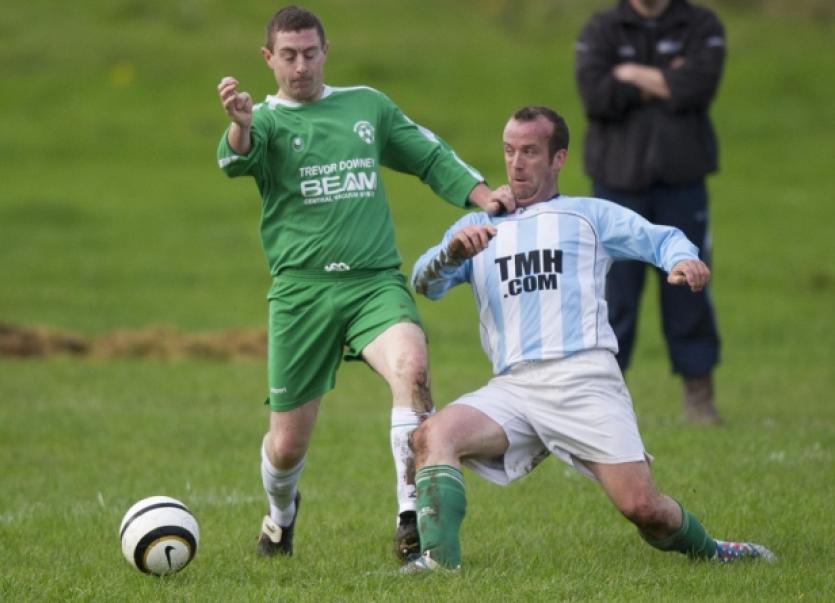 St. Michaels have been flying in recent weeks but of all the teams that you don’t want to meet in a Cup competition, Peake Villa would probably be the most dangerous.

Both sides showed their quality in the early stages creating a number of half chances without ever really threatening. But it was a brace of goals within a minute of each other which settled this tie.

Richie Ryan opened the scoring after 33 minutes when he pounced on a David Slattery knock down from a precise Michael Ryan cross. Then, as Peake were attempting to gather themselves, Saints won a corner and it was dispatched straight to the net by Russell Quirke.

Things almost got worse for the visitors shortly before half-time, but a Chris Higgins shot hit the outside of the post and rebounded to safety, and they went to the break two goals up.

Peake did catch them napping however right from the restart, and Stephen Carroll turned in an Eoin O’Dwyer cross to reduce the deficit to the minimum. However, Quirke eased the pressure on the home team again shortly after the hour mark, when a neat back heel from Pa Quinn put him through to finish into the bottom corner.

After that, the St. Michael’s defence sat back and soaked up the pressure from the visitors, who really lacked a cutting edge in the final third of the pitch. So with one more game left in the local area of the National Cup, St Michael’s look set for another long run in the competition this year, while the Thurles boys are left to return home and lick their wounds.

Town progressed to the next round with a comfortable victory in Cork on Sunday. David McGrath opened the scoring in the 12th minute. Eight minutes later, Keith Cashman hit a super solo goal to double the gap. Cashman again netted 15 minutes later when he volleyed home from ten yards after a great run and cross from Emmet Johnson.

Two minutes into the second half, Shane Flynn scored Clonmel Town’s fourth from 15 yards out. Adrian Cleere extended the lead when he headed Town’s fifth from a Tony Scully corner in the 55th minute, and Keith Cashman capped a great performance when he tapped in from close range to complete his hat-trick a minute from time, to extend the away team’s unbeaten start to the season for another week.