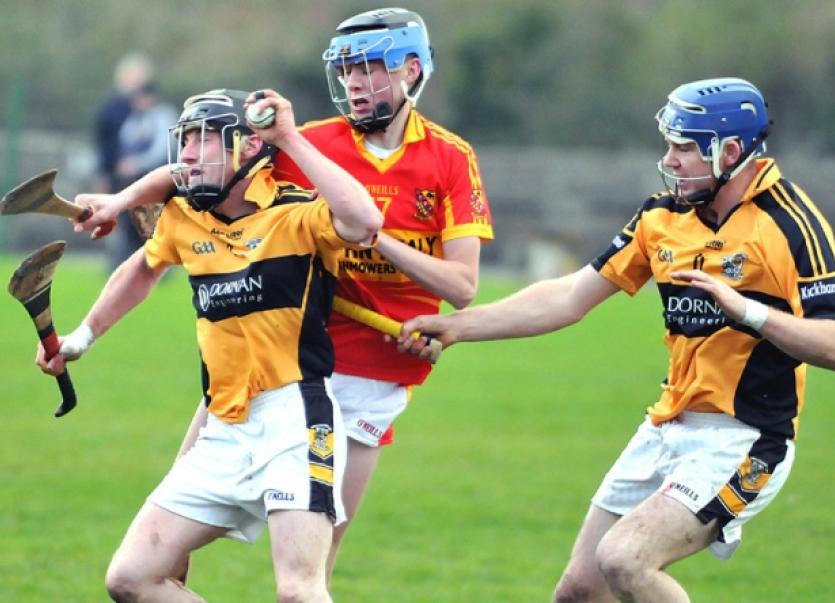 Knockavilla Kickhams’ quest for a first Clean Ireland Recycling county junior hurling A title continues after they failed narrowly to Moycarkey-Borris in a rousing final at Cashel on Saturday.

Knockavilla Kickhams’ quest for a first Clean Ireland Recycling county junior hurling A title continues after they failed narrowly to Moycarkey-Borris in a rousing final at Cashel on Saturday.

Kickhams looked to have put themselves in a winning position when they trailed by only one point in the 41st minute, having played against the wind in the first half, but a Moycarkey goal from a penalty restored the Mid men’s momentum, and carried them to victory in a hectic climax.

Apart from the first point of the game by Killian Loughman in the 3rd minute, Moycarkey led all the way. Former minor star Pat Ralph bagged an impressive 1-11 (0-2 from play) of the Moycarkey-Borris tally, a remarkable achievement in difficult conditions for free-taking, a fresh, cold breeze blowing into the road goal. In the final analysis, his performance was the difference between the teams.

Moycarkey-Borris had first use of the wind, placing the onus on them to take the initiative but against a very keen Knockavilla challenge they found it difficult to take control.

The West side used full forward Paul Breen as an additional defender, and his reading of the play and deliveries from defence were a major problem for Moycarkey-Borris in the first half.

Knockavilla had the first score of the game a point by Killian Loughman, but Phil Kelly soon levelled for Moycarkey who were finding it hard to get scores from play, Pat Ralph’s accuracy from frees being their main source of white flags.

The Mid men got a morale boosting break in the 13th minute when Donie Bergin’s good work set up Phil Kelly for a Moycarkey goal and with further Ralph points (2) and a Niall Heffernan point, they were 1-7 to 0-4 clear after twenty minutes, Conor Horan and Brendan Ryan (2) contributing to Kickhams’ tally.

Peter Comerford finished off a good Kickhams move in the 21st minute with a goal, a crucial score for them against the wind, keeping them right in touch at the interval with the scoreboard reading, Moycarkey 1-10, Knockavilla 1-5.

A five points lead did not look adequate for Moycarkey going into the second half. Kickhams re-opened with promise, outscoring their rivals 3-1 in the first five minutes of the half.

Kickhams looked to have struck a major blow in the 41st minute when Paul Breen netted to leave them only one point adrift, and it seemed as though the game was their’s for the taking at that stage.

Credit the Moycarkey management with a match-winning move as they brought team captain Phil Kelly back to centre halfback and switched Eamon Flanagan to attack, a strategy that worked handsomely and had a big bearing on the outcome with both players having a huge influence on proceedings in the critical closing stages.

Indeed it was Flanagan who was fouled, leading to a Moycarkey penalty in the 47th minute.

Pat Ralph bravely went for goal, his shot was parried, but ended in the net for a score of immense importance, restoring the four points lead.

In an exciting finish, Moycarkey protected that four points advantage as the game went into extra time.

Paul Breen cut it back to three with a Knockavilla point in the 33rd minute and a minute later Kickhams captain Tommy Comerford was presented with the dilemma when awarded a free about thirty yards out – take a point in the hope there would be more time, or go for a levelling goal. He opted for a point but though they camped in the Moycarkey half to the finish, and there was some desperate defending, the goal Knockavilla sought eluded them and Moycarkey were the champions.

Moycarkey’s delight was as obvious as Knockavilla’s disappointment. The West men had contributed enormously to a highly entertain game but that is of little consolation to them as the quest for a first county title at this grade continues.

Knockavilla had many fine individual performances and it would have been interesting to see how their lighter players would have fared in better conditions. Paul Breen, Padraig Morrissey, Shane Morrissey, Conor Horan, Tommy Comerford, Daniel Breen and accurate free-taker Brendan Ryan most caught the eye.