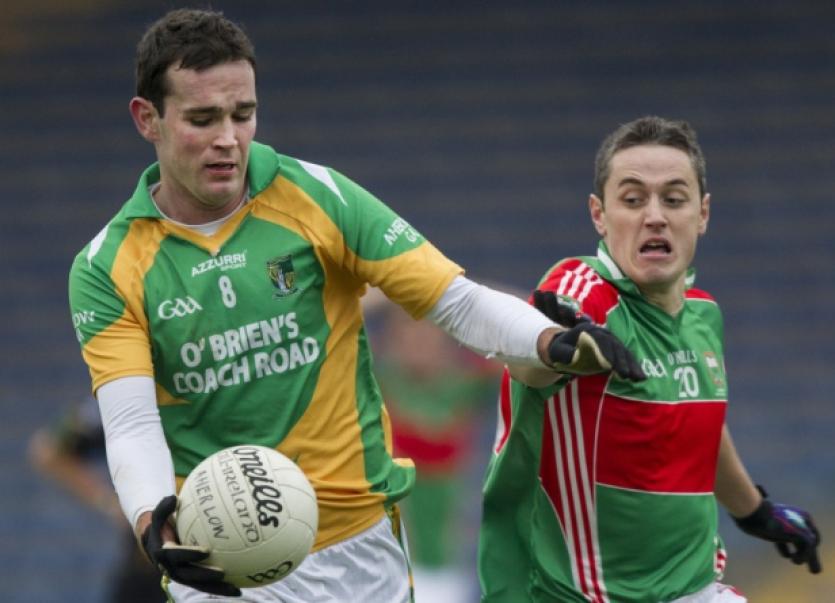 An attendance of 1,746 at Semple Stadium last Sunday afternoon witnessed history being made when Loughmore/Castleiney became the first Tipperary club to complete the County Senior Hurling and Football Championship double.

An attendance of 1,746 at Semple Stadium last Sunday afternoon witnessed history being made when Loughmore/Castleiney became the first Tipperary club to complete the County Senior Hurling and Football Championship double.

This latest and most glorious chapter in the club’s proud history was written when they beat Aherlow Gaels in the County Football Final with a victory that was every bit as convincing as the 10-points margin suggests.

And the achievement is all the more noteworthy when you consider a gruelling schedule of matches that saw them in action on seven successive weekends in both hurling and football. 14 players who appeared at some stage of Sunday’s final were also on duty in the hurling final.

With the emphasis firmly placed on keeping possession in a good, open game, Loughmore led by 1-4 to 0-5 at the break after a fiercely contested half. However Aherlow’s spirited resistance was broken early in the second half. Loughmore’s Aidan McGrath had a point before a 50 metres free from ace freetaker John McGrath in the 4th minute flew all the way to the net to open a 6-points gap. After that there was never any doubt that Loughmore would be denied either that historic double or their 12th county football title and first since 2004.

The fight seemed to drain from Aherlow as they realised the enormity of the task facing them. John McGrath scored the next 4 points, 3 from frees and one from a ‘45, as confidence coursed through the Loughmore veins. They sauntered into an even bigger lead 10 minutes from the end when Cian Hennessy sprayed an ambitious pass across the pitch, Noel McGrath helped it onto Evan Sweeney and the corner forward steered a low shot past Aherlow goalie Shane Leonard (3-9 to 0-5). They could even have scored another goal seven minutes from the end when Derek Bourke blazed an effort wide from a good position.

It took Aherlow 21 minutes to open their second half account, the point coming from Bernard O’Brien. And while the game had long since slipped beyond their reach they recovered some of their composure after that merciless Loughmore onslaught, that saw them score 2-5 without reply, to put some respectability on the scoreboard in the closing minutes.

They were denied a consolation goal by Loughmore’s mean defence, although they had late points from Seamus Grogan, Thomas Fahey and Bernard O’Brien.

However this day was all about Loughmore. In full back John Meagher they had the man of the match, while Lorcan Egan and Tom King were equally vigilant in defence. King scored their first goal in the 7th minute when he planted a low shot in the net following good work by John McGrath and Evan Sweeney.

John McGrath must have pushed King close for the man of the match award with that impressive scoring tally, mostly from frees, which included an eyecatching effort from near the sideline in the 11th minute. Elsewhere they had outstanding performers in Noel McGrath, Cian Hennessy, Evan Sweeney, Liam McGrath and the old warhorse David Kennedy, who at 37 is their oldest player.

For a club that was almost unable to field a team but for the combination with Lattin-Cullen, reaching this final represented progress of sorts for Aherlow, although it mightn’t seem that way this week as they lick their wounds following a heavy defeat. County player Barry Grogan wasn’t as effective as usual, as he found John Meagher a difficult opponent, while Thomas Hanley, Thomas Fahey, Bernard O’Brien, John Hennessy and captain Mark Hanley never threw in the towel.