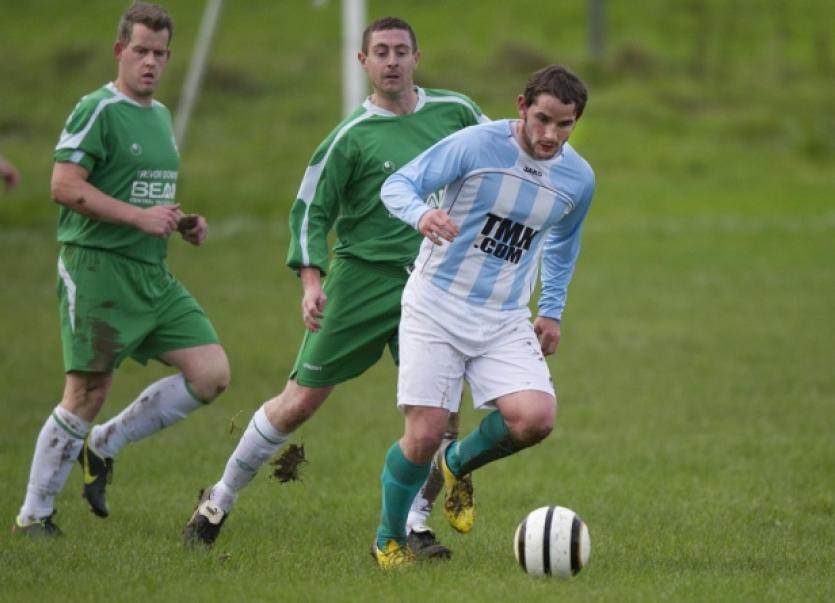 Nine goals, numerous incidents and a thrilling comeback all produced the game of the day in Killenaule on Sunday last. After a slow start the game sparked to life in the 15th minute. And it was worth the wait as the scoring was opened in Rosegreen’s favour as Darragh Browne fired an absolute screamer into the home net.

Rocked by this, Killenaule’s Andy Hanly decided that anything Browne could do, he could do better, and he levelled the scoring ten minutes later with a rocket of his own.

Things went downhill and fast for Killenaule as the Downey brothers, Trevor and Vinnie, scored a brace of goals for Rosegreen in the 30th and 35th minutes, the first from the penalty spot, to give the away team a two goal lead at the break.

It got no better for the home team in the first part of the second half, when Eoin Byrne’s made it 4-1 from 20 yards out, and victory looked assured.

Just after the hour, Joey Feery was pulled down in the area and Hanly stepped up to score his second goal from the spot. Five minutes later, Feery was again fouled in the area, and Hanly completed his hat-trick. As well as that, Rosegreen were reduced to ten men so they were now hanging on by their fingertips. And the dam broke ten minutes from time, when Hanly scored his fourth of the day, a simple tap-in, as Rosegreen began to fall apart. The final ignominy of the day came three minutes from time when Ger Ivors nipped in to score Killenaule’s fifth.

After coasting through the lower divisions Tipperary Town are finding out that the higher you rise in the Tipperary League, the faster it can all come unstuck for you. Harbouring hopes of continuing their spectacular run of promotions all the way to the Premier League, they finished the weekend at the foot of the First Division knowing that unless they can arrest their slide quickly, they will be in trouble by season’s end.

They were beaten on Sunday by near neighours St Nicholas, themselves having a strangely inconsistent season, with the only goal of the day coming from Thomas Peters who rose highest for a free kick to nod home three minutes before the break. Though the home side did attempt to mount a challenge in the second half, they came nowhere near to scoring and St. Nicholas took all three very valuable points.