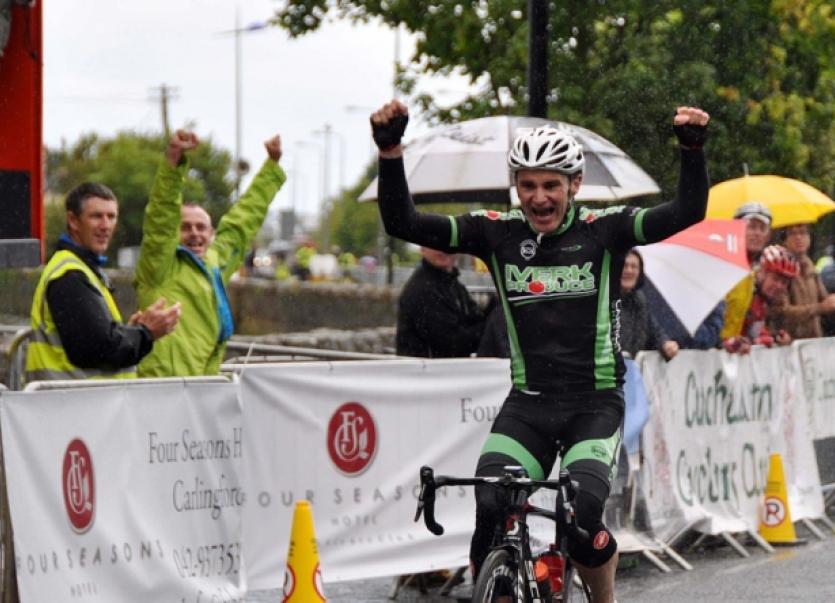 A very talented and successful soccer player with Clonmel Town during the 1970s and 80s, Chris Regan started coaching schoolboy players in the town in 1974.

He successfully combined both roles and since then has devoted his life to the game, and in particular schoolboys football in the town and county.

For many years he looked after schoolboys football on his own and many players have identified him as a huge influence on their careers.

To many people Chris Regan represents schoolboys football in Tipperary and he has taken charge of Tipp’s Kennedy Cup squad.

His biggest success came in 2006 when alongside another former player Cyril Conran he successfully steered Clonmel Town to the Danone Cup Finals in Lyons in France, where they represented Ireland with distinction.

Clonmel Town now caters for more than 400 schoolboys and it is debateable whether this flourishing academy would exist were it not for the hard work and dedication of Chris Regan.

Clonmel teenager Andrew Duncan returned from the World Transplant Games in South Africa with an impressive haul of medals.

The Rockwell College student, who competed in the 15-17 years age category, was one of Ireland’s most successful athletes at the games in Durban, which attracted 1,000 organ transplant recipients from 50 countries.

He scooped gold in tennis and squash, silver in badminton and bronze in table tennis.

Andrew, from Powerstown, was accompanied on the trip to South Africa by his mother Audrey and the Irish team returned home to a tumultuous welcome at Dublin Airport.

He had received a kidney transplant from his father Malcolm in March of 2012, which made his performances in Durban just a year and-a-half later all the more commendable.

A gifted player of all racket sports, he is a member of Hillview Sports Club in his home town.

A sixth year student of the Ursuline Secondary School in Thurles, Edel Nyland is regarded as one of the brightest hockey prospects the school has ever produced.

Last season she was chosen for the Munster U-18 team and played in the inter-provincials in Dublin.

She held her place on the provincial team for this season, scoring five of Munster’s six goals in the inter-provincials played in Cork. She is also joint captain of the school’s Senior A team.

The Loughmore girl has been invited by the Irish senior hockey team to train with them if she stays in Ireland for college.

Edel’s talent has also attracted attention outside of Ireland, when she was approached by the University of Virginia and offered a full four-year scholarship to study there and play hockey with the university.

They may not have enjoyed a successful season on the domestic or national front but the St. Michael’s club is honoured for the outstanding achievements of three of its players.

James Walsh, Paul Breen and Christopher Higgins played on the Irish amateur team that won the international quadrangular tournament in  Limerick in September.

The three St. Michael’s players started all three games as Ireland beat Scotland 3-0, the Isle of Man 5-0 and Northern Ireland 1-0 over three consecutive days to win the competition for the first time since 2001.

The squad produced a monumental effort to prevail in a demanding and intense environment, scoring nine goals without conceding once.

Player of the Tournament Paul Breen scored the game’s only goal in the 22nd minute as Ireland wrapped up the tournament with a victory against Northern Ireland.

The performances of the St. Michael’s players in this event, coupled with the silver medal that Ireland won in the UEFA Regions Cup Finals in 2011, have helped the Irish side rise to fourth in the Euorpean rankings, the country’s highest ever position.

Fergal Collins has been a model of consistency since winning his first All-Ireland titles as a young teenager, and he will be looking to maintain that rich vein of form as he graduates to the Senior ranks this year.

His latest success came in the shape of an All-Ireland double.

In the 40 x 20 he teamed up with fellow Ballina player Ger Coonan to win the Intermediate Doubles when they beat Kildare’s Niall O’Connor and Paul Moran in the final in Kilkenny.

He struck gold again in the Intermediate Doubles, 60 x 30. This time his partner was the less experienced David  Hickey, also from the  Ballina club. However despite their outsiders rating they did enough to see off the challenge of the Mayo pair Stephen Cooney and Ian McLoughlin in the final played in Broadford, Limerick.

Fergal also reached the 60 x 30 Intermediate Singles Final but he was hampered by a hip injury, as Stephen Cooney turned the tables on him.