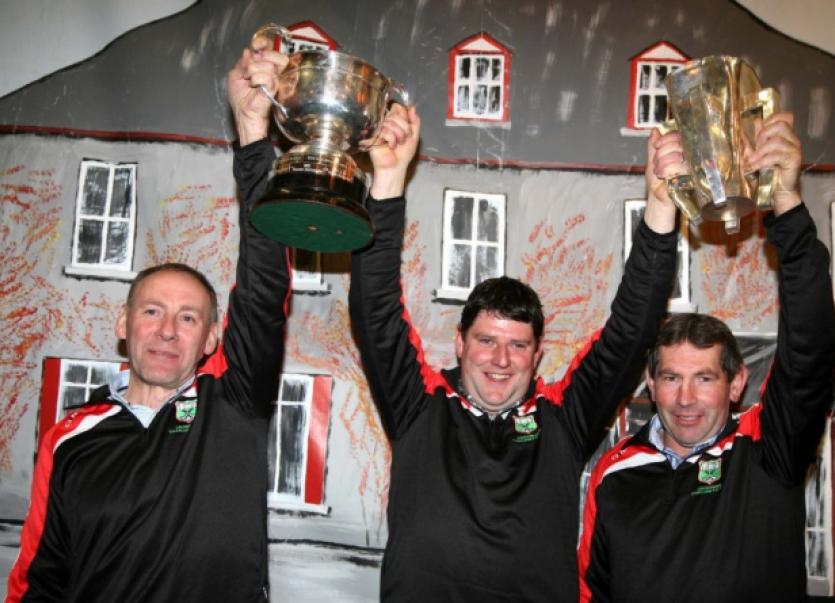 Alex Chadfield and Ryan McKenna put the bitter disappointment of a second place finish in the Irish Championships the previous week firmly behind them when they competed for Ireland in the Home International Rowing Championships at the National Water Sports Centre in Nottingham in July.

By the time the boats had reached the one kilometre mark in the Men’s Junior Pairs, Alex and Ryan were ahead in a closely contested race against crews from England, Scotland and Wales.

They maintained a punishing stroke rate, increasing their advantage inch by inch, and had their very vocal support on their feet and roaring encouragement as the race progressed.

By the time they crossed the finish line in front of the other crews in a time of seven minutes the cheering was deafening.

It was a very proud and emotional moment for the boys, their families, club members and supporters, as the sound of Amhran na bhFiann echoed across the water as they were presented with the gold medals.

Their emphatic win was testament to their determination, total commitment to an extremely challenging training regime and sheer hard work, and a reward for their club coaches Jimmy Fennessy, Sham Anderson and Susan Allen.

This rising star of a tough and competitive sport trained six days a week, getting up at 6.30am to run, and she trained every evening after school in the months leading to the World Federation  competition.

She overpowered her opponent Anna Kajula, who was counted out, to be crowned champion, sparking great scenes of celebration among her family and supporters.

Despite having taken up the sport only two years previously, she made a rapid rise through the ranks and  looks destined for  further honours.

The Tipperary Ladies team that won the National Senior Inter County pitch and putt title had built steadily towards this fantastic achievement.

They had finished third twice in recent years and had a great battle with Cork in St. Annes in the Munster event earlier in the season. The ladies had always shone at individual events but as a team had struggled with their consistency to push for the very top.

However they turned the tables on all the opposition when they claimed the title with some marvellous performances as they called on all their guile, experience and talent at the finals played in Hillview in September.

In doing so they ended a 23-year wait since the county had previously won this  championship.

Eight teams lined up for the event and Tipp saw off the challenges of Kildare and Dublin, who finished four shots in arrears of the new champions.

In the All-Ireland Schools track and field championships in Tullamore he was in sparkling form, giving an exhibition of middle distance running as he bowed out of schools athletics with his name securely etched on the record books. In the Senior 800m final he broke the existing record set 31  years previously.

Three hours later he competed in the Senior 1500m final, when his relentless front running tactics burned off the opposition, leaving him to jog the final 100m to the applause of the large attendance who knew they were seeing something special. This All Ireland Senior Boys 800m and 1500m double had been last achieved in 1989 by Niall Bruton.

In the European Junior 1500m final he set a personal best when finishing like a train in fourth place, narrowly missing out on the bronze by less than half a second.

In November Sean finished his junior career in stunning style when he won the All-Ireland juvenile cross-country championship.

McGrath shot six of his seven points after half-time as Loughmore came from six points down to claim the Dan Breen Cup for the third time.

Their first Tipperary crown since 2007 was secured with a stirring second half display, with McGrath leading the charge, as they edged home by a point in an exciting contest.

Nenagh were ahead by 4 points at half time but McGrath was soon grabbing the game by the scruff of the neck as he stepped up to the plate once again on the county GAA calendar’s biggest day.

On the inter-county front Tipperary had a barren year in the Munster and All-Ireland Championships, despite an encouraging run that saw them reach the National League Final.

That final against Kilkenny in Nowlan Park was a typical blood and thunder affair between the sides. Kilkenny emerged winners by 3 points against a Tipp team for whom Noel McGrath was a leading light, scoring 3 points, as he once again underlined his value to the county.

Clonmel superheavyweight Dean Gardiner got the year off to a flying start by winning the National  Intermediate title.

In a year during which he wore the Irish vest with pride, he returned from the Tammer senior multi nations event in Tampere, Finland with a silver medal to add to the bronze medal he won at the World Golden Gloves Championships in Washington  DC in October.

Dean beat an Icelandic opponent on a unanimous decision in the quarter final in Finland before losing to a Belgian opponent in the  semi-final.

He was narrowly beaten on a split decision by a Mexican fighter in the quarter final at the World Golden Gloves.

A very successful season for Dean - who returned to Ireland in recent years after some time spent in Australia - also included a silver medal in the Gee Bee multi nations event in Helsinki.

A supreme effort by the hurlers and footballers of Loughmore/Castleiney saw them rewarded with a  unique double.

When they beat Aherlow Gaels in the County Senior Football Championship Final the club secured its 12th title and their first since 2004.

However a much greater significance was attached to the success. With the Dan Breen Cup already safely in the locker, after they beat Nenagh Eire Og in the hurling decider, it meant they had become the first club in Tipperary to secure the double,  winning the County Senior Hurling and  Football Championships in the same year.

With such an overlap of players between both teams - 14 players who appeared at some stage of the football final were also on duty in the hurling equivalent - it was no surprise that the same management team looked after both sides.

Declan Laffan, Seamus Bohan and Pat McGrath can take enormous credit for this quite remarkable achievement. They steered the teams through a gruelling and punishing schedule to reach the summit in both codes. As the season reached a climax, a hectic run saw the club in action on seven successive weekends in hurling and football.

However Declan, Seamus and Pat couldn’t have managed their resources any better, as Lough more re-wrote the history books.

An immortal figure in the halcyon era of Tipperary hurling, Tony Wall is regarded as one of the true greats of the game.

After captaining his county to victory in the All-Ireland Minor Championship of 1952 he soon graduated to the Senior ranks, making his debut at corner back in the 1954 championship. When Pat Stakelum retired after the 1957 championship, Tony Wall was the obvious choice to take over his role at centre back and this he did with great aplomb, remaining as Tipperary’s number six until he retired after the 1967 season.

This was a period of sustained success for Tony at both county and club level, as Thurles Sarsfields dominated Tipperary hurling courtesy of a star-studded team. He won no fewer than ten County Senior Hurling medals, captaining the team in 1958 and 1959. He also captained the Tipp team when they won the McCarthy Cup in 1958.

Tony Wall was highly regarded within the game, being praised by one commentator as “strategy-driven, tactical, clinical and calculating, matched by a temperament that was phlegmatic and unflappable”. It was said that he rarely wasted a clearance, choosing to forego the long and high crowd-pleasing clearances in favour of a well-placed, thoughtful ball.

His standing was further enhanced when he won the inaugural Hurler of the Year Award in 1958 and he was chosen as centre back on the Tipperary Team of the Millenium in 1999.

It’s tempting to suggest that Aisling Hickey has a bright future in racquetball but it’s equally fair to say  that she has already made a considerable mark in  the game.

The UCC student from the Rossmore club completed the three in-a-row of Irish Senior Singles titles in 2013, defeating Castlebar’s Katie Kenny in the final.

She is also the current Women’s European Singles Champion, winning the title in Italy last July when she beat a German opponent in the  final.

And she enjoyed further European  glory when she played on the  Irish team that won the European Senior Championships  in Italy.

A little over a year ago she won a bronze medal in  the Girls U-18 Singles event  at the IRF World Junior Championships in Los  Angeles.

Aisling’s targets for 2014 include nailing down a place on the Irish team for the World Senior Championships in  Toronto in June.