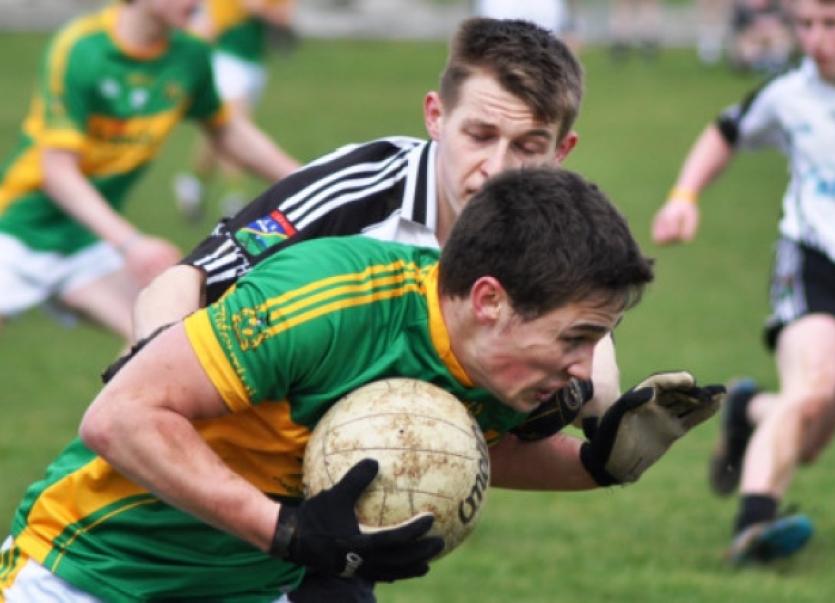 Without ever being extended fully, hot favourites Clonmel Commercials were easy winners over JK Brackens in the county under 21 ‘A’ football semi-final played at Gortnahoe on Sunday morning last.

Originally set for Leahy Park in Cashel, then transferred to New Inn, before finally going ahead at the Mid Tipp venue, this contest was almost done and dusted at the interval. Playing against the strong breeze the South champions turned at half-time leading by 1-6 t0 0-4, and barring a football miracle one couldn’t see any other result only a Commercials victory. And so it turned out.

County minor champions for the last four years and fielding five of this year’s county under 21 panel, Commercials were first on the scoreboard with an Ian Fahey point in the sixth minute.

Dean McEnroe equalised for JK Brackens two minutes later following good work by Michael Greed. In the 10th minute the hard-working Greed was fouled and McEnroe converted the free. It would be the only time the Templemore side would lead.

A 12th minute goal for Commercials, beautifully finished by Liam Murchan after an incisive run by midfielder Ian Fahey, was a huge score against the elements.

Jason Lonergan was next on the scoreboard when he cut in from the right to score a fine point in the 19th minute.

The next three points were all scored by Liam Murchan who was proving a handful for the Brackens backline. The third of these was the pick of the three following a good move involving Padraig White, Kevin Fahey and Padraig Looram.

Dean McEnroe, who would be Brackens only scorer on the day, kicked two points of his own in a 30 second spell to narrow the gap, one a free and another a 35 metres effort. However Commercials Padraig White had the last score of the first half, finishing off a flowing move, to leave it 1-6 to 0-4 at the interval.

Commercials owned the ball early in the second period but did little with it, kicking two wides and three wasteful balls in to the arms of Brackens goalie Tommy Morrissey.

In the 38th minute Colin O’Riordan was fouled close in and the resultant penalty was converted by Dean McEnroe past Jake McDonald. McEnroe had scored no less than four penalties in the Mid final against Loughmore.

Commercials responded immediately and all profligacy was quickly abandoned. The middle of the park was taken control of by Seamus Kennedy, Michael Quinlivan and the two Faheys, and five unanswered points followed in eight minutes.

New recruit Eoin Fitzgerald kicked a sweet point from the wing in the 40th minute, quickly followed by a long range effort from Ian Fahey. Frees from Paudie White and a lovely effort off the ground by Michael Quinlivan stretched the advantage further before another point from White after a field-length movement made it 1-11 to 1-4 for Charlie McGeever’s side.

In fairness to the Mid champions, led by inspirational captain Colin O’Riordan, they wouldn’t capitulate to Commercials, and ran at them at every opportunity. McEnroe had their final score in the 49th minute after a quick free from O’Riordan.

The closing minutes were academic, Commercials brought on all six subs, while Ian Fahey, Jack Kennedy and Padraig White completed the scoring bringing it to 1-14 to 1-5 at the final whistle.

Commercials were in control almost everywhere all day with Seamus Kennedy (despite an injury) his usual dominant self in defence assisted by Kevin Fahey and Richie Gunne. Ian Fahey and Michael Quinlivan had a great battle in the centre with Quinlivan lessening Colin O’Riordan’s usual dominance, while up front Liam Murchan, Padraig White and Jason Lonergan stood out.