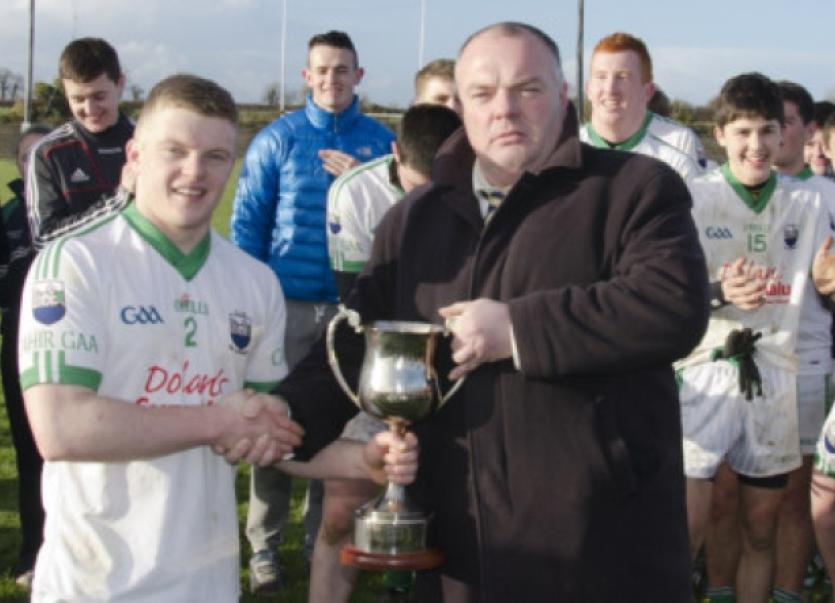 In this Hall Alarms sponsored South U-21 B Football Championship Final Cahir defeated Kilsheelan-Kilcash at a bitterly cold Monroe.

This was a low-scoring encounter and the game never reached any great heights. While there were some nice passing movements both sides were guilty of faulty shooting.

Kilsheelan were first on the scoreboard when Colin Gleeson passed to Bill Maher, who sent over after just two minutes. Cahir had a pointed free from Liam Casey to open their account.

In the next attack Cahir’s Dean Lonergan and James Walsh advanced but they were denied by David Corcoran, who cleared his lines, but Cormac Looby and Brian McKenna combined well for Cahir with the effort sailing left of target. Liam Casey doubled his tally from play.

Cahir’s Liam Casey surged forward but was intercepted by Tadhg Lonergan but once more when Brian McKenna delivered to Casey he was wide off the woodwork.

In the 14th minute McKenna opened up the Kilsheelan defence and delivered to Aaron Murphy to raise the first green flag. Cahir were having the better of matters as James Walsh found the unmarked Dean Lonergan who made no mistake for a point. Both sides posted wides before Kilsheelan’s Paul Maher crossed to Colin Gleeson and he pointed. Colin Gleeson and Aaron Murphy traded points and at the interval the scoreboard read 1-4 to 0-3 for Cahir.

On the resumption Cahir’s Ian Flannery pointed before Kilsheelan’s Brendan Martin was black carded and replaced by Alex Harte. Liam Casey had a point, from a free, for Cahir to stretch their lead. Kilsheelan were dealt a blow when Paul Maher received a second yellow. Kilsheelan, to their credit, despite the numerical disadvantage battled hard. Evan Comerford converted a free and Colin Gleeson had a good point from play to reduce the deficit.

They had a further wide before Evan Comerford fielded well but was fouled and then he pointed the resultant free to reduce the margin to 1-6 to 0-6 with 10 minutes left.

Cahir regained the initiative and Liam Casey careered through from midfield to score his side’s decisive second goal. The same player tagged on another pointed free.

For the final five minutes Cahir were the dominant side as they could scent victory and swept forward with Dean Lonergan, Liam Casey and Brian McKenna doing best for them. Kilsheelan goalie John Smyth had to be alert to save a certain goal from the boot of Mikey O’Connor but Cahir ran out deserving winners of the title.

Joe Brennan, Chairman of the South Board presented the winning captain Liam Howard with the trophy to the delight of the Cahir supporters.