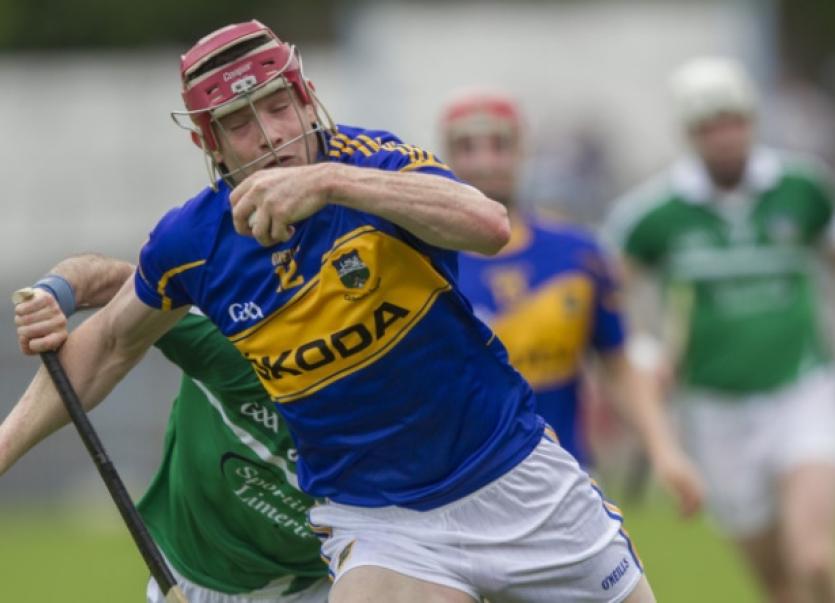 Tipperary carved out an unlikely win over Limerick in the Munster intermediate hurling semi-final at Semple Stadium on Sunday, twice coming from behind in the closing stages of actual time and extra time for a one point win to keep the defence of their Munster and All-Ireland titles on track.

Tipperary carved out an unlikely win over Limerick in the Munster intermediate hurling semi-final at Semple Stadium on Sunday, twice coming from behind in the closing stages of actual time and extra time for a one point win to keep the defence of their Munster and All-Ireland titles on track.

A Tony O’Brien point from a free at the death in ordinary time saved Tipperary initially and then, in the last minutes of extra time, Tipperary came from being three points adrift to score a goal and a point for the slenderest of wins.

Tipperary owed a great debt of gratitude to goalkeeper James Logue who produced a number of top class saves to deny Limerick certain goals at crucial times in the game. The Ballingarry man’s save from Limerick’s Mike Ryan three minutes from the end of actual time kept Tipperary’s hopes alive when a goal would have put Limerick four clear and out of reach.

Again in the first half of extra time he prevented Willie Griffin netting. In the final analysis, these stops were the difference between victory and defeat.

Tipperary had to field a completely new team this year having won the All-Ireland last year and they started with a spring in their step. Tommy Heffernan’s great run and goal in the second minute helped them to a 1-4 to 0-1 lead after nine minutes as they looked sharp and determined.

Limerick settled down to hit four unanswered points in the next eight minutes but Tipperary finished the half well with Tommy Heffernan(2), John Sheedy and Thomas Cleary notching points for an interval lead of 1-10 to 0-7.

Everything going to plan for the champions, it appeared, but the second half was a different story. David Collins saw a rasping shot for goal stopped by the Limerick goalie Brian Murray after eight minutes but the score that really brought the game to life was a goal by Mike Ryan for Limerick in the 42nd minute, bringing them within two points of the home side (1-11 to 1-9).

Limerick were now well on top as Tipperary struggled to find a rhythm. Four points in as many minutes put them ahead for the first time by the 47th minute and they kept edging clear as Tipperary responded through two Tony O’Brien frees. James Logue saved brilliantly from Mike Ryan as Limerick sought the goal to kill off the champions. Tony O’Brien shot the levelling point in injury time, 1-15 each, and the champions were reprieved.

Limerick continued to be the better side in the first period of extra time and Logue again came to Tipp’s rescue from Willie Griffin, at the break of which Limerick were ahead by two points, 1-18 to 1-16. Carrick’s Bill Walsh, who had come on in the second half, was showing the athleticism and determination that some of his colleagues lacked and he had a fine effort for goal blocked by the Limerick goalie Murray who was forced to retire injured afterwards.

Four minutes into the second half of extra time, Tommy Heffernan set up Tony O’Brien for Tipperary’s second goal, levelling the game, but once more Limerick surged three points clear and with two minutes remaining a Tipperary win was most unlikely.

Fortune favours the brave however and Tipperary showed tremendous resilience as Kevin Fox blasted home an equalising goal with two minutes left. A minute later, Tommy Heffernan whipped over a winning point to send Tipp into the final against either Cork of Clare.

James Logue’s contribution has been saluted but there were heroics too from such as Ronan Sherlock, Brian Stapleton, Tommy Heffernan, Tony O’Brien, Daire Quinn and subs Bill Walshe.