Early exit for Tipp juniors as Limerick always in command 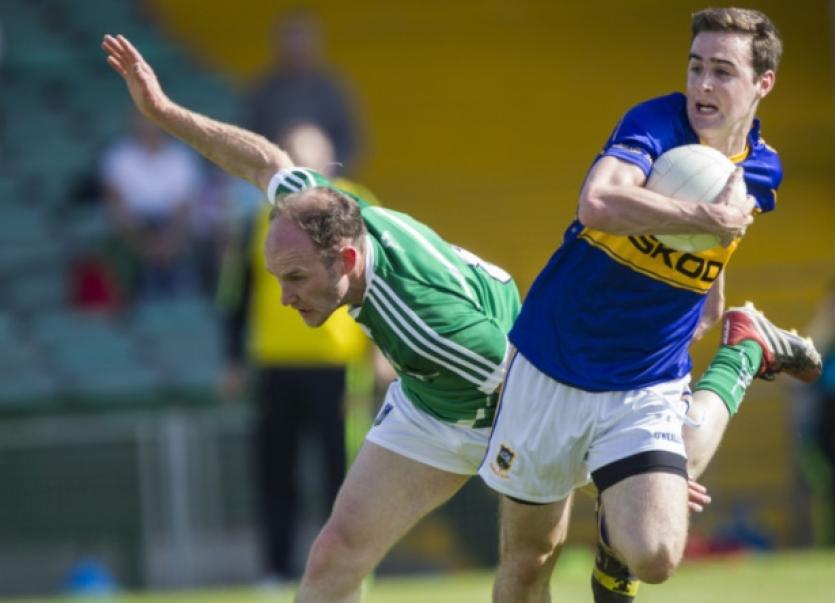 Tipperary’s second string footballing side exited the Munster Junior Championship at the first hurdle in  Limerick on Saturday last.

Tipperary’s second string footballing side exited the Munster Junior Championship at the first hurdle in  Limerick on Saturday last.

A youthful side for this grade, containing seven of this year’s under 21 panel, they played second fiddle throughout to a stronger more experienced home outfit who always seemed to have the upper hand.

Limerick seemed to have that little extra in every line of the field throughout and moved the ball with more fluency and speed from defence to attack. Their forwards, in particular Jamie Lee and Peter Nash, were the real matchwinners and contributed 1-8 of their 1-13 tally over the hour.

Lee opened the scoring after just 80 seconds with a free, and while Tipp’s Ross McGrath levelled, it was the next score that hugely influenced the game. A long high ball played into the Tipp defence in the sixth minute was won by centre-forward Peter Nash who turned and sent a superb shot high in to the net past a helpless Evan Comerford. It restored a never-to-lose advantage to the Treaty side and gave them a confidence and belief to push on. And they did.

By the 22nd minute the lead was extended to 1-6 to 0-3 with the Limerick forwards kicking some sweet points from play in the process, Lee with two, Nash with another, a fisted effort from Keith Hartnett and also one from roaming half-back Tony McCarthy.

Tipperary’s only replies were a free from Sean Flynn after 10 minutes and an excellent point from Dean McEnroe in the 14th minute when he finished off a flowing move involving Sean Patrick Guerins and David McGrath.

Tipp managed to reduce the deficit to four points at the break. Fr. Sheehy’s Sean Flynn kicked his only point from play in the 24th minute and two minutes later Dean McEnroe tagged on a free after David McGrath was fouled while advancing towards goal.

With the wind to face into after the break Tipp would have a lot to do to turn this game around. The positive re-start that was needed never came and it was Limerick who had the better of the early second half exchanges. By the 40th minute the lead had been pushed out to 1-10 to 0-6.

A point from the ever-dangerous Jamie Lee opened the scoring after 90 seconds and was matched by a free from Sean Flynn, after David McGrath was once more impeded. Three impressive points in succession for Limerick from Bill Creamer, Peter Nash and Lee again had the home side well in control.

Tipp were thrown a lifeline in the 41st minute when McGrath’s pass put McEnroe through and the JK Brackens man took his goal well. Another free from Sean Flynn a minute later suddenly had the gap reduced to three and Tipp were back in with a shout with 18 minutes still to play.

Bill Creamer’s excellent pass set up Jamie Lee for a Limerick point before Thomas Hanley kicked a white flag for the visitors. Flynn’s fourth free had Tipp back within two points by the 50th minute but it was to be as close as they would get.

Jason Mullins got a run on the Tipp defence only to see his shot go just over and then in the 59th minute Keith Hartnett kicked the insurance point for the Shannonsiders when converting a 45. Tipp had the last score of the game, a Dean McEnroe point going into to injury time but the goal they desperately needed to save the day never came.

Mark Phelan of Limerick was blackcarded late on.