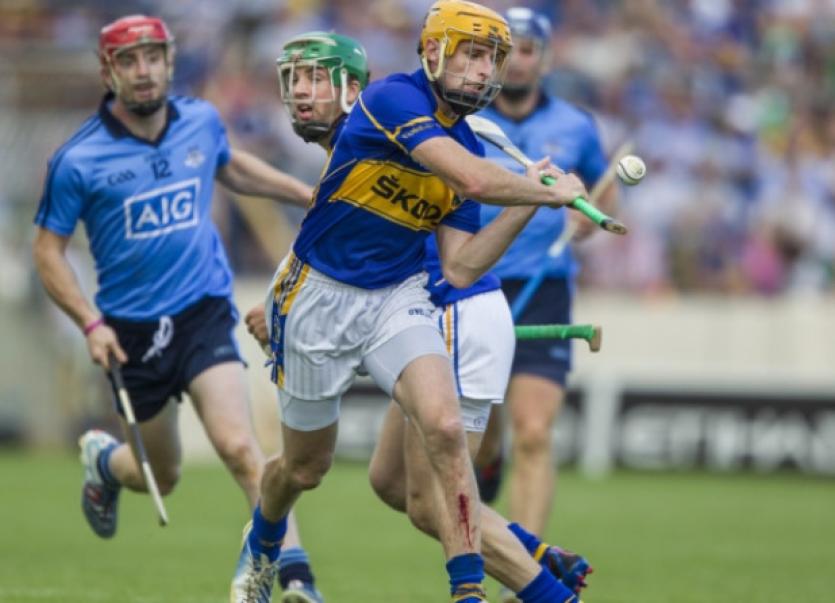 Munster moves to Croker for a novel All Ireland semi-final. The eighty-third championship meeting of the counties holds out fascinating prospects with the bookies unable to decide a favourite.

Munster moves to Croker for a novel All Ireland semi-final. The eighty-third championship meeting of the counties holds out fascinating prospects with the bookies unable to decide a favourite.

Kilkenny will be studious onlookers following their hard-won victory over a brave Limerick effort.

This is certainly a clash that is gripping the imagination of the hurling world. All that legendary Munster rivalry is now being transferred to the national stage with great expectations for a thrilling outcome.

For Tipperary it’s another step in the rebuilding process following that Munster defeat to Limerick. (Mind you hasn’t Limerick’s near miss last Sunday adjusted perceptions of our loss to the Shannonsiders, especially the more vitriolic venom that was directed at the players at that time).

Our reinvention since the Limerick defeat has been significant. The last quarter of the Galway game was clearly the tipping point although opinions will clash over whether we found a new level at that stage or the Tribesmen simply imploded. In truth there was probably an element of both.

Offaly then offered no test and Dublin too were disappointing though I hear there is a sense among the panel that they weren’t given due credit for making the Dubs look so poor.

Either way nobody will misread the stiffness of the examination they face on Sunday. Cork, after their near miss last year, has taken route-one directness this time with a reinforced line out. Mark Ellis and Damian Cahalane have been added to the defence; Aidan Walsh is a massive addition to midfield; Bill Cooper and Alan Cadogan have brought an edge to the attack with Paudie O’Sullivan also back to bring yet another option in this zone.

By any reckoning it’s a significantly stronger Cork side than the one which came within a whisker of taking the 2013 title.

The encouraging news from the Tipp camp is that the walking wounded appear to be back to full health. That’s particularly important in the case of Mickey Cahill whose mobility and covering capacity is well recognised by all. It seems likely that he’ll be the only change from the Dublin game though who loses out on his return is a point of discussion.

It seems to be a toss-up between Paddy Stapleton and Cathal Barrett. Stapleton is seen as the more experienced but Barrett has shown the better corner back form this year.

In all of this it appears that the management will again opt for James Barry at full back with Paudie Maher on the wing, even though the published line-out may well have the Sarsfields man listed at number three. It seems most unlikely that Conor O’Mahony will start with Kieran Bergin once again a likely wing back.

The major midfield story concerns Shane McGrath. Earlier in the season he seemed to slip back to a cameo role bringing energy to the scene for ten to fifteen minutes on introduction. The Dublin game changed all that when he turned in an outstanding performance and the word is that he’s sustained that level ever since. It’s a remarkable revival by a player who seemed to be drifting towards the lower end of the panel. Hopefully it will continue on Sunday. James Woodlock looks likely to be his partner at midfield though inevitably you can expect change here during the game.

The attack looks set to resume as it began against Dublin with Denis Maher and the recovered Niall O’Meara pushing hardest for an introduction. Colin O’Riordan will probably be listed among the twenty-six man panel and it’s not inconceivable that he’d make an introduction depending on how the game pans out.

There is a prevailing view that this game could well develop into a shoot-out between two potent attacking units facing defences that have been problematic, though at this stage of the championship things usually get much tighter. Cork appear to have found a more stable central defensive spine in Shane O’Neill and Mark Ellis though some of the flankers have been troubled at times especially on the wings. There’s scope surely here for ‘Bonner’ and company to make hay in the space of Croke Park. Tipperary fans will hope that Gearoid Ryan can bring his training form to the big day and that Noel McGrath can assume a far more influential role than thus far in the championship. Collectively our attack has major potential especially if all six can hit the high notes together.

News of Shane McGrath’s form is welcome because the Cork midfield pair, Daniel Kearney and Aidan Walsh, is strong.

Then people will worry about our defence. We have a manufactured full back but the management seems to be more interested in player inter-changeability. I hope this scenario doesn’t cost us vital scores at critical times on Sunday.

Goalie Gleeson hasn’t won widespread approval among the Tipp fans either. The absence of a top-quality save or two this year is part of the reason though in his defence he could hardly be blamed for most (any?) of the ones that passed him so far. Also we don’t appear to have an obvious alternative.

So there are ifs and buts on both sides for a game that’s universally seen as a fifty-fifty affair with everything depending on the mood of the day. At our best we certainly have the capacity to win but we also have the potential to hit trouble spots when the pressure comes on. I’m amazed at the levels of confidence I’m hearing among the Tipperary public – hopefully it’s not a case of hearts over-ruling heads. Good luck to all involved.

Incidentally this will not be the first championship clash between Tipperary and Cork at Jones’s Road. Another excellent press pack from our county P.R. service alerted me to events in 1896. Tipperary met Cork in the Munster final at Kilmallock and Canon Fogarty’s history details events: “At twenty minutes to go, following a war of words over a ‘free puck’, the Cork team walked off the field and left the gathering in confusion. Scores were level at 1-3 each and the match was given to Tipperary by referee, Mr. Blake of Navan. Ballyhea objected and there was a replay in Dublin. Cleverly enough the Tubberadora captain took up his forces the previous evening and next day they were victors at the whistle by 7-9 to 2-3”.

It was an era when procedures were less stringent and teams often walked off the pitch in protest. By the way Tubberadora went on to take the All Ireland with a runaway win over Dublin. An omen, hopefully.

Finally there’s little space to do credit to Kilkenny and Limerick on that titanic tussle last Sunday though I hardly imagine I have too many readers in those counties anyway. It was an amazing collision given the atrocious conditions with much to admire from both sides. Kilkenny have taken many a game in the past through sheer hurling class but this one was more a victory for steely resolve. It was a day for grinding out a ‘dirty’ win and they brought all their wily experience to the job.

Limerick deserve huge credit too. They did everything required bar slotting a goal or two which would have made all the difference. The lack of goals in both the Munster final and again on Sunday proved critical to the outcomes and that’s surely an area they’ll need to address. I suspect they need the injection of a few more players to complete the deal and with promising underagers like the present minors that should be possible in the years ahead.