Tipp never in the hunt as classy Clare dominate 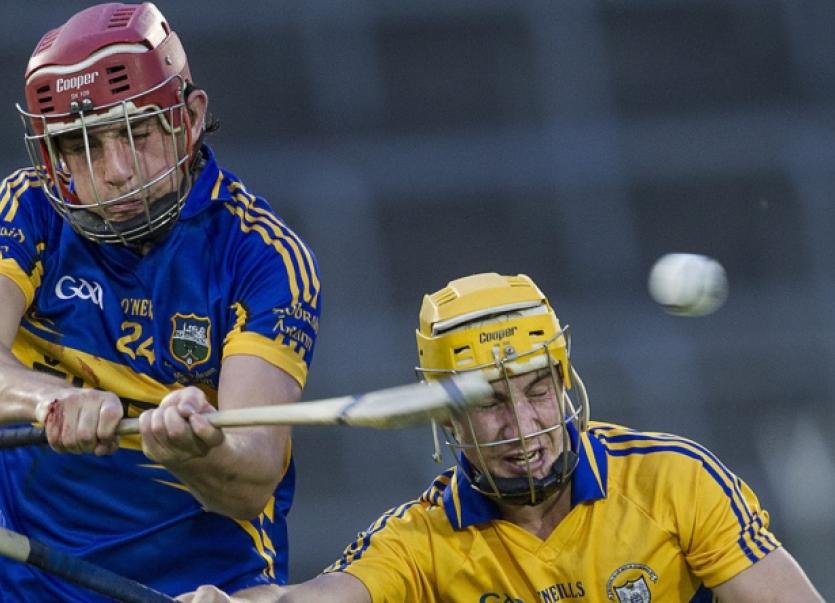 Only four points separated the teams at the finish but the reality is that Tipperary were outplayed by Clare in last week’s Munster U-21 Hurling Championship Final.

Only four points separated the teams at the finish but the reality is that Tipperary were outplayed by Clare in last week’s Munster U-21 Hurling Championship Final.

On an evening that didn’t bode well for the county’s future, Tipp were a pale shadow of the side that destroyed Cork in the semi-final, as they were beaten by Clare in the final for the second successive year.

With ten of the team that started last year’s final and six seniors who started the quarter-final against Galway, Clare played with panache. They were a yard faster to the ball and their teamwork was so superior that it seemed they had an extra player, while they wasted very little ball.

The outcome was clearly signposted in the first half in front of an attendance of 8,296 at Semple Stadium and Tipperary were fortunate to be only 6 points behind at the break (1-9 to 0-6).

Tipp didn’t score from play in that opening half and they had to wait until the 36th minute for that first score from play, which was supplied by Liam McGrath, who a minute earlier became the first Tipp player other than Jason Forde to score when he converted a long range free. Despite the poverty of their performance, however, they never gave in and mounted a comeback midway through the second half when captain Niall O’Meara released Jason Forde and the senior panelist buried a low shot into the net.

That left 5 points between them and Tipp needed to push on after the goal but Clare got the next two scores, points from Podge Collins and Aaron Cunningham. In between those scores Tadhg Gallagher had a shot for goal blocked as Tipp went in desperate search of goals when they should have been picking off points.

Liam McGrath later went close and Clare goalie Ronan Taaffe made a great save from Jason Forde but they never looked like bridging the gap. In the final minute Jason Forde found the net from a penalty after Niall O’Meara was fouled. Just before the goal Clare wing back back Seadna Morey was dismissed when he received a second yellow card but the sending off, like Forde’s late strike, had no bearing on the result.

Any positives for Tipp were few and far between on such a disappointing night. Jason Forde led the attack bravely and he received sporadic support from Niall O’Meara and especially Liam McGrath, who stood up and was counted in the second half, while substitutes Colin O’Riordan and John McGrath also gave them a boost.

However the midfield pairing of Justin Cahill and Brian Stapleton was completely overshadowed by Clare’s Colm Galvin and Tony Kelly. Tomas Hamill and Seamus Kennedy tried hard but the defence struggled to cope with the mobility and fluency of the Clare attack, where the diminutive Cathal O’Connell, the aerial ability of Peter Duggan and the movement of Podge Collins and Aaron Cunningham gave their opponents an uncomfortable night.

Jason Forde frees helped Tipp lead twice early on but Clare never looked back once Peter Duggan rose high to bat Alan O’Neill’s free to the net in the 18th minute to give them a 5-point lead (1-5 to 0-3). With full back David McInerny and centre back Alan O’Neill in such imperious form in the Clare rearguard, Tipp’s opportunities to strike back were limited and they never got going until the second half, when it was too late.