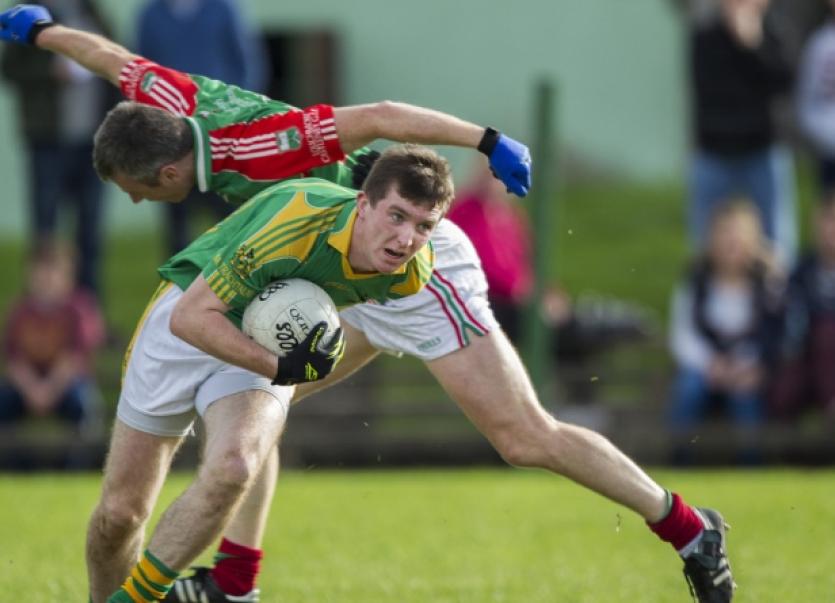 Champions Clonmel Commercials slumped to a disappointing one point defeat at the hands of Loughmore-Castleiney in the Clean Ireland Recycling county senior football semi-final at Cashel on Sunday.

Champions Clonmel Commercials slumped to a disappointing one point defeat at the hands of Loughmore-Castleiney in the Clean Ireland Recycling county senior football semi-final at Cashel on Sunday.

Commercials were well below their best and never moved with their customary fluency, the lacking of scoring power up front in particular being their undoing.

They scored only one point in the first half as they struggled to find a rhythm against opponents who were in no way over-awed by the calibre of the men facing them.

Commercials will justifiably argue that they deserved at least a second chance, and could possibly have won had Loughmore goalie Dominic Brennan not denied Michael Quinlivan a certain goal in the 44th minute when he turned his rasper from close range over the bar, but at the same time it is worth noting that Loughmore-Castleiney led all the way and but for some slack finishing could have been further clear at the finish.

Loughmore-Castleiney did not give the Clonmel side the room to display their talents, and after eight minutes had three points on the board, courtesy of two Liam McGrath frees, and another from Aidan McGrath, who damaged his hamstring in the process and had to retire.

Jason Lonergan opened Commercials’ account in the 9th minute, the last score of a first half which became quite niggly approaching the break and which ended with four players getting yellow cards following a prolonged melee, Loughmore’s Cian Hennessy and Noel McGrath and Commercials’ Jason Lonergan and Kevin Fahey.

Commercials, now aided by the breeze, raised the tempo of their game in the second half and levelled inside three minutes with pointed frees from Quinlivan and Ian Barnes.

But Noel McGrath regained the lead for Loughmore in the 39th minute and Liam McGrath doubled the advantage two minutes later.

Back came Commercials. Quinlivan was short of target with a free before bursting through to blast for goal in the 44th minute only for Dominic Brennan to deflect the effort over the bar for a match-winning save.

Colman Kennedy levelled for Commercials with a great point in the 50th minute. Again it seemed the ball was in Commercials’ court but once more it was Loughmore who showed the greater heart. John McGrath, Liam McGrath from a free, and a glorious point from Noel McGrath, had the Mid lads three clear with four minutes to play.

Alan Lonergan came on for Commercials and made his presence felt by kicking a point from a 57th minute free. Ian Barnes did likewise a minute later to leave only one in it, and as Quinlivan bore down on the Loughmore goal, an equaliser seemed inevitable, but he was penalised for over-carrying.

Loughmore’s performances in both hurling and football have earned them huge respect and all the ingredients that give substance to their displays were in evidence here. Despite an intense programme of big games in both codes on recent weeks, which must be taking a severe toll on their stamina, their spirit never wavers.

Noel McGrath was an inspiring figure for them, named at midfield but operating everywhere, and kicking two great points from play. Kieran McGrath and John Meagher were at the heart of a Loughmore backline that never gave celebrated Commercials forwards an inch. Liam McGrath’s accuracy was also crucial while Miceal Webster was a worry to Commercial all the way, though not enjoying the best of service from his colleagues. Dominic Brennan’s second half save from Quinlivan was the difference between winning and losing in the final analysis.

Commercials will feel they did not do themselves justice. Perhaps they played as well as they were let, but this performance fell well below their potential, their attack in particular failing to fire. They scored only three points from play, hardly the form of champions, and their one point return for the first half was most un-champion-like.