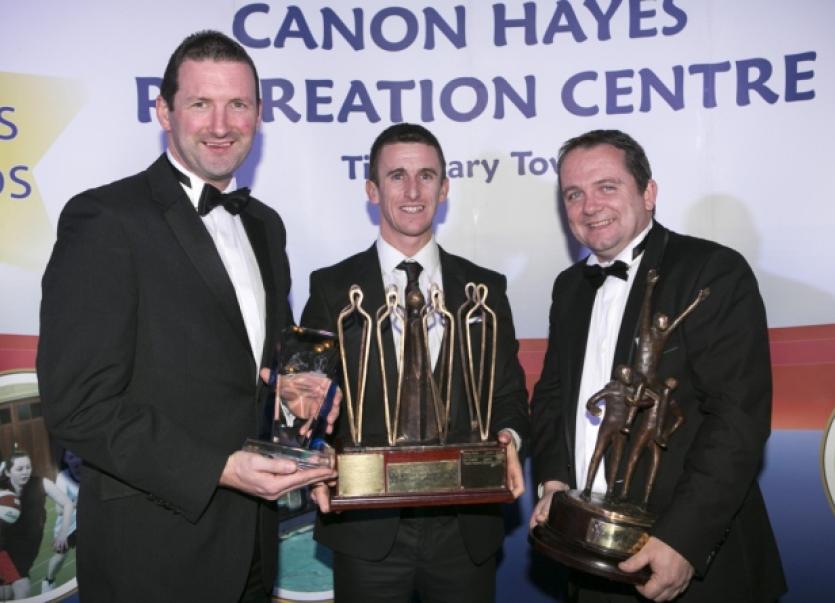 Clare hurling manager and former goalkeeper Davy Fitzgerald can seldom have received such a welcome in Tipperary.

Clare hurling manager and former goalkeeper Davy Fitzgerald can seldom have received such a welcome in Tipperary.

Fitzgerald, who guided Clare to the All Ireland title in September, was honoured with the Canon Hayes national award at a gala ceremony in Ballykisteen Hotel on Sunday week last.

And he received a huge Tipperary ovation for his outstanding achievement - something he admitted he was not used to in the county from his playing days.

It was a special night for goalkeepers with Tipperary legend Brendan Cummins also honoured with the Mick Doyle Golden Sporting Memory Award.

The Ballybacon-Grange man retired in 2013 after twenty years with the Tipperary senior team and setting a record for championship appearances.

Fitzgerald and Cummims were among the greatest keepers to play the game and their awards were fitting recogntion of their contribution to hurling.

The Clare man had been honoured as Manager of the Year twenty four hours earlier at the RTE sports awards and in Tipperary picked up the coveted national award, ahead of the other nominees, the Sligo Rovers team that won the FAI Cup for the third time in four years, and the Irish women’s rugby team that won the Grand Slam.

The national award was presented by Minister of State Tom Hayes along with Ronan Bunting, representing the sponsors, TASK Community Care.

The award for Sligo Rovers was accepted on the club’s behalf by FAI chief executive John Delaney, who also congratulated the St Michael’s FC players on their local award. On the national front, he was hopeful that the Republic of Ireland ‘dream team’ of Martin O’Neill and Roy Keane would get Ireland to the Euro finals in France in 2016.

Davy Fitzgerald told MC Martin Quinn that managing his native Clare to the Liam McCarty Cup was something he had dreamed of for many years.

He said he had learned a lot from his time managing Waterford, including lessons from the heavy defeats to Kilkenny in the All Ireland final and to Tipperary in the Munster final when the Deise lost by seven goals.

“I needed to get Clare competitive again and the greatest thrill for me after the final was to see the joy and delight on people’s faces”, he said.

And his predictions for 2014? “I think it will go right to the wire. The championship is very competitive now and there are a number of contenders. Kilkenny were an enormous team and deserve huge credit for what they have achieved but I don’t think it’s their time anymore. It is now open with teams such as Tipperary, Galway, Limerick, Waterford, Cork and ourselves in contention”.

And missing from the Tipperary line-up as they try to retain the title for the first time since 2010 will be goalkeeper Brendan Cummins.

“I must be in denial because even though I have retired I have just started training again”, he told Martin Quinn.

“I know I will miss it when it comes to February and March but it was time to move on and put family first”, he said.

Presenting the award to Cummins, former GAA president Sean Kelly reminded the attendance that in addition to his two All Ireland medals, five Munster medals and five All Stars, the Ballybacon man has also won a record seven Poc Fada titles in the Cooley Mountains.

“He is an outstanding ambassador for the game”, Mr Kelly said.

Naturally Brendan Cummins hopes that Tipperary will again be one of the teams in contention for the All Ireland title next September.

“We are in transition at the moment. We gave lost our last three championship games which is unheard of but I think that these defeats will drive the team on”, he remarked.