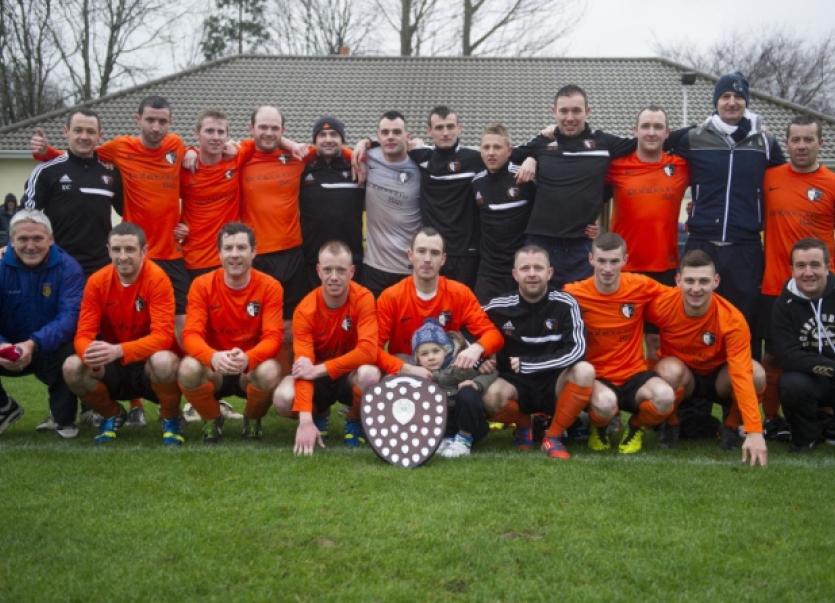 The Second Division Shield final was played out on Sunday afternoon in atrocious weather conditions, with Kilsheelan United winning.

The Second Division Shield final was played out on Sunday afternoon in atrocious weather conditions, with Kilsheelan United winning.

Despite the biting cold and chafing win both teams thundered into the opening exchanges without really carving out any clear chances, but still gave the large crowd plenty to cheer. From start to finish the heat of a local derby with silverware at stake kept both sets of supporters on edge.

Once the game did settle down, it was Kilsheelan United who had the better chances and but for some profligacy in front of goal could have opened the scoring on a number of occasions around the 20 minute mark.

That they didn’t was down to some stout defending by the Redmondstown back four who were ably assisted at times by their midfield unit. When the goal did come however, it was down to both confusion in the defence, and very sharp attacking play.

playing to the whistle - the cardinal rule

A poor clearance from the Redmondstown keeper was knocked back inside by Kilsheelan’s Trevor Cloona, and the defence stopped awaiting an offside whistle that never came. Kilsheelan United’s Michael McHugh however followed the cardinal rule of playing to the whistle and pounced on the through ball before slotting coolly beyond the advancing keeper to put his team ahead four minutes from the half time break.

With their tails up, Kilsheelan United came out in the second half determined to put the game to bed, and came close five minutes in, when McHugh again pounced on a ball driven across the Redmondstown area, but was denied by the keeper diving bravely to clear the ball away with his feet. This woke Redmondstown up, but even the half time introduction of their top scorer Paddy ‘Whack’ O’Donnell made no difference in their ability to breach a very strong Kilsheelan United defence.

If anything, United’s grip on the game got stronger as it went on, and 15 minutes from time, they again almost doubled their lead when a beautifully delivered inswinging corner from Ian Coughlan was bravely held by the keeper to keep his side in touch.

Again three minutes later Coughlan was thwarted and at this point it looked like only one team were going to win this game. In fact, it was only in the last two minutes of the game, that O’Donnell from Redmondstown had two half chances from set pieces gave Kilsheelan United any worries, but in the end they held out to the delight of their supporters. It might not have been a great day to watch football for the fans, but that didn’t stop some wild celebrations at the end, as Kilsheelan United lifted the Shield, and Redmondstown were left to rue the form that they left at home.