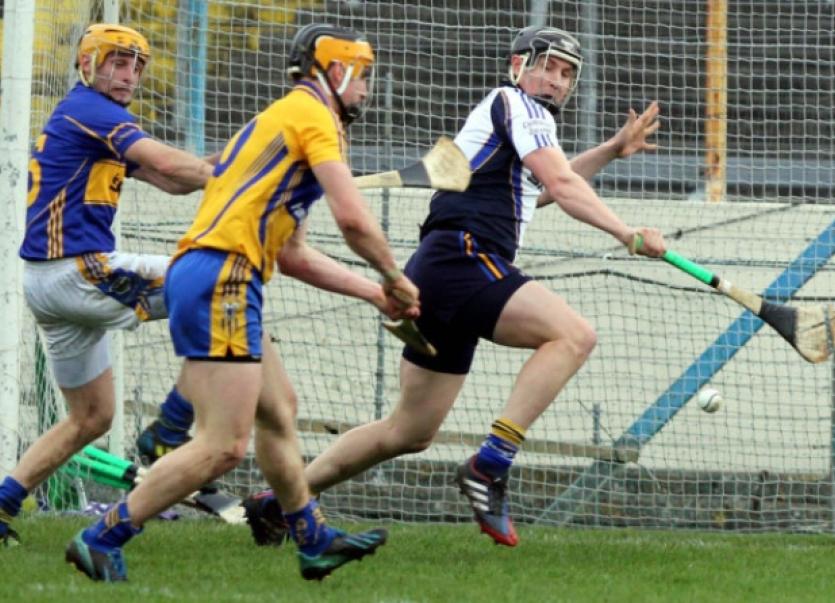 Defeat by Clare in Sunday’s National Hurling League tie at Semple Stadium was a chastening experience for Tipperary.

Defeat by Clare in Sunday’s National Hurling League tie at Semple Stadium was a chastening experience for Tipperary.

Putting a brave face on the setback, manager Eamon O’Shea stated that the only positive he could take from it was that it showed exactly where his team are and how much work they have to do.

To many observers that place seems like miles off the pace, with a huge workload facing them to try and retrieve lost ground against Clare, one of the favourites for the McCarthy Cup.

For all his occasionally unacceptable histrionics and theatrics on the sideline, Clare manager Davy Fitzgerald has moulded a team that will again take some stopping this year. Whatever about his claim that some players in past Clare teams had resorted to taking illegal drugs for recreational use, this was an adrenalin-fuelled performance that swept Tipp aside. And it wasn’t just the 7-points margin that highlighted the considerable gulf between the sides, as much as the way in which the game played out from start to finish in front of an attendance of 8,133.

Clare performed with the confidence and swagger of All-Ireland champions and it was no surprise that they led from start to finish, Colm Galvin giving them the advantage with a 3rd minute point while Seadna Morey supplied the final point in the last minute. Their organisation, pace, sharpness and determination in the tackle were all light years ahead of Tipperary’s disjointed approach.

At times Clare played the game on a different level with hat-trick hero Conor McGrath, John Conlan, captain Patrick Donnellan, Colm Galvin, Patrick O’Connor and Brendan Bugler all outstanding. In particular their guile, movement and ability to create space in attack bamboozled the Tipp defence and was topped off by a ruthless streak that left their opponents reeling. The first three goals were cases in point. For the opener Conor McGrath, who his team left deliberately isolated at full-forward, nudged Paddy Stapleton out of the way in the chase for Patrick O’Connor’s clearance and delivered a low strike that goalie Darren Gleeson might have dealt with better.

For the second Colin Ryan found the unmarked Padraic Collins, who picked out the unmarked Conor McGrath who had the simplest of tasks in slotting home. Then Tomas Hamill was punished by Colm Galvin for his hesitancy and the midfielder provided the assist for John Conlan to shoot the third goal and give his team a double scores lead at half time, 3-7 to 0-8.

Yet there had been some encouraging moments in that opening period for the home team, who replaced Tomas Hamill with Conor O’Mahony (omitted from the starting line-up for “tactical” reasons, according to his manager) just before the break. After McGrath’s opening goal they responded well and Shane Bourke pointed in the 16th minute after one of their best moves, while at the other end a great block by Michael Cahill was evidence that they might be getting to grips with Clare’s spring-heeled forwards. However despite 15 wides over the course of the 70 minutes they never found the space in a congested attack to inflict real damage on their freewheeling opponents.

The performance of top scorer John O’Dwyer was one of the few bright spots for Tipp and the new half had barely started when the Killenaule player’s first-time effort, following Jason Forde’s pass, brought a great save out of Clare goalie Donal Tuohy.

They had spent most of the opening period chasing shadows but Tipp made most of the running in the early stages of the second half, outscoring Clare by 0-6 to 0-1 between the 35th and 50th minutes. John O’Dwyer led the way with scores from play and placed ballls, and with Jason Forde and Shane Bourke also finding the target the gap was down to just a goal when “Bubbles” pointed a free from inside his own half in the 50th minute.

As well as O’Dwyer, Noel McGrath also came more into the picture as Tipp chipped away at the lead. James Woodlock never stopped motoring at centrefield while Conor O’Mahony steadied a defence in which Shane McGrath and Michael Cahill also showed signs of improvement.

Ultimately, however, that fightback only papered over the cracks of a flawed performance. Within two minutes Clare had eased up through a few more gears, as Conor McGrath added a point before the same player broke clear to complete his hat-trick. Even though 18 minutes remained, Clare were ahead by 7 points and there was no way back for Tipp.

Clare might even have rubbed further salt into the wounds by scoring a fifth goal but Darren Gleeson did well to save from Peter Duggan before blocking another effort by Colin Ryan a minute later.

Despite a good contribution by Conor Kenny, who scored two late points, Tipp were denied a consolation goal when James Woodlock’s effort was blocked by Donal Tuohy.