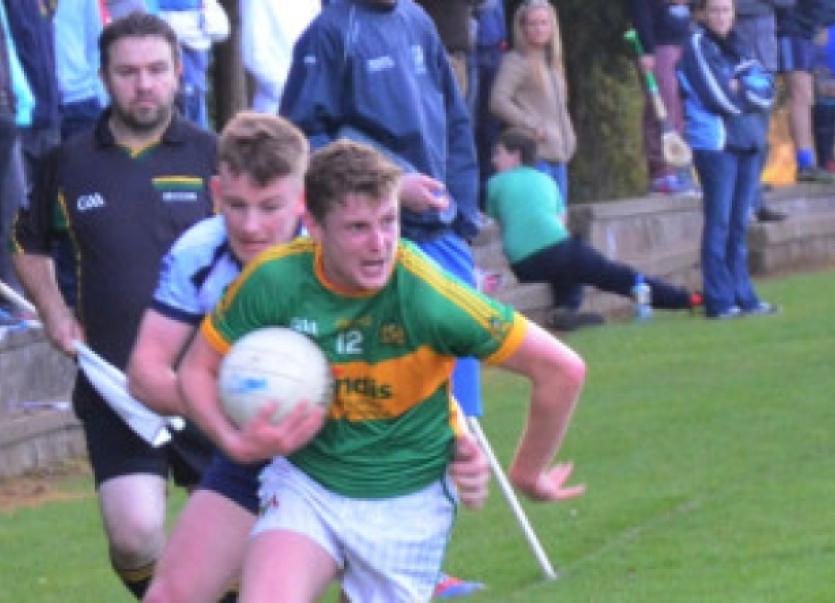 Rovers suffered a blow with the dismissal in the 24th minute of Alan Campbell, who was very impressive in the opening half, while young Stephen Quirke was also outstanding all through for Moyle Rovers.

However when the chips were down in the second half Jason Lonergan came to the rescue for Commercials with 3 great points and Michael Quinlivan, who was also prominent, scored two, one from an excellent 45. Substitute Paudie White fired over 2 points to finally put the game beyond a gallant Moyle Rovers team for whom Darragh O’Dwyer, Danny Lyne, Peter Acheson, Ross Mulcahy, Liam Boland, Ronan Desmond and Craig Condon were to the fore.

Commercials, who now march on in defence of their South title, had fine performances from Seamus Kennedy, Conal McCullagh, Ian Fahy, Jack Kennedy, Aldo Matassa, Padraic Looram and Paudie White. They will face either Killenaule or Ballyporeen in their bid to retain the O’Shea Cup.

Moyle Rovers got out of the blocks faster with 2 wonderful points in the first 2 minutes, both from play, by Stephen Quirke and Brian Mulvihill. On Commercials’ first attack a ball along the end line deceived the Moyle Rovers goalie and Conal McCullagh kicked to the net.

However for the next 10 minutes Rovers came thundering into the game. Liam Boland had a great point out on the touchline and then there was another fine point from Stephen Quirke, with Liam Boland scoring again.

When Rian Clancy scored from a great attack the sides were level, 1-3 to 0-6. After Alan Campbell was sent off a point from the gallant Peter Acheson left Moyle Rovers in front at half time by 0-7 to 1-3.

Whatever was said in the dressing room at the break, Commercials came out a different team. They had a point from play by the improving Conal McCullagh and he set up Jason Lonergan for another point before Michael Quinlivan hit a beauty on the run, with Jason Lonergan adding another point from play, all within 6 minutes, to put them 3 points ahead.

Brian Mulvihill clawed back some of the deficit when he pointed a 30 metres free in the 12th minute and he scored again from play in the 14th minute to leave the score nicely poised entering the final quarter, with Commercials ahead by a point.

Then Michael Quinlivan struck a magical 45 over the bar and Jason Lonergan poached a point from play before Kevin Harney raced through the middle to add another point. Commercials introduced Paudie White and John Harney and the fresh legs seemed to work as Commercials had 2 points from Paudie White, while Moyle Rovers had a sole point from Craig Condon.