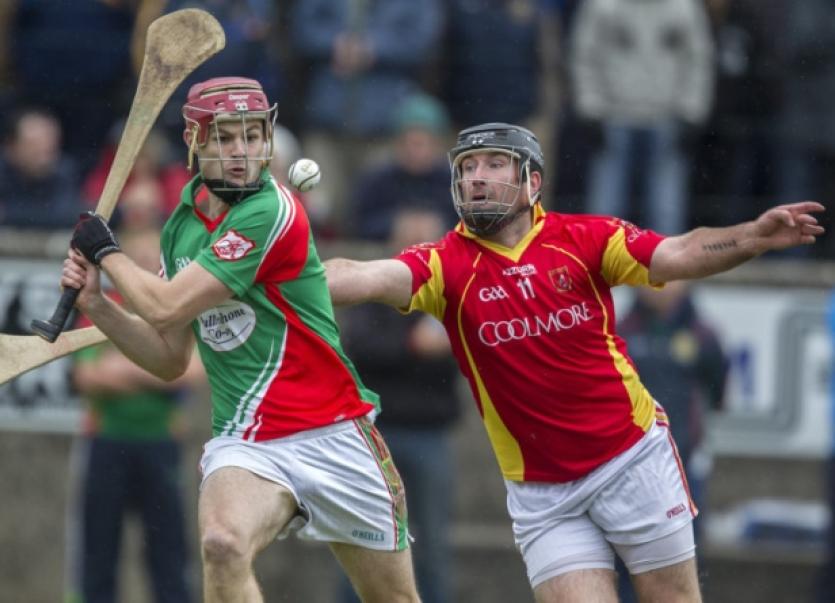 A late surge by the holders caused them some

A late surge by the holders caused them some

palpitations but Mullinahone held on for a deserved

Mullinahone were cruising towards their twelfth title, all won in the last 21 years, when a sweet finish by Michael Dunne, following a great catch and assist by captain and man of the match Sean Curran, gave them their second goal.

That score put them ahead by 10 points with 13 minutes remaining and there seemed no way back for Killenaule.

However Mullinahone endured a few anxious moments in the closing stages, as Killenaule outscored them by 2-3 to 0-2 in the last 12 minutes.

Two converted frees by Joe O’Dwyer seemed little more than consolation scores but Killenaule took much closer order six minutes from the end when county star Kieran Bergin battled his way through the Mullinahone rearguard for a fine goal. Paul O’Dwyer added a point, although Mullinahone regained their composure with points from play from Eoin Kelly and substitute Donal Coady.

There was one last kick left in Killenaule, as Kieran Bergin’s long delivery was swept to the net by Matthew O’Donnell in additional time, but they ran out of time in their attempt to win the championship for an eighteenth time.

Killenaule won’t have to wait long for an opportunity to gain revenge, as the sides will meet again in the last sixteen of the County Championship at the same venue and at the same time (3 o’clock) next Sunday.

Killenaule had several absentees last weekend, most notably John Bubbles O’Dwyer and the Bergin brothers, Cathal and Niall. Bubbles patrolled the sideline, with his injured hand in a cast, and how his team longed for his scoring ability, as they registered just 5 points in the opening 47 minutes.

For most of a game played in front of an average-sized attendance on a damp afternoon the Killenaule forwards were held under lock and key by a solid Mullinahone defence in which Paul Curran dominated at full-back, while the half back line of Niall Curran, Eoin Fennelly and Alan Curran was a great barrier.

Sean Curran was a real livewire in attack while Eoin Kelly dropped back to midfield to good effect in the second half, as he mopped up an amount of loose ball. Michael Dunne and Cathal Horan made the most of their goal chances while Jack Shelly and Luke Mullally also had their moments.

Killenaule actually began the better, with early points from Declan Fanning and a Joe O’Dwyer free. Mullinahone roared back and took the lead in the 6th minute when a Sean Curran effort that appeared to be drifting wide was seized by Cathal Horan, who shot to the net. Eoin Kelly, who missed two early frees, made it third time lucky in the 12th minute, with Daniel Guinan replying.

A low-scoring yet fiercely-contested affair was level by the 16th minute when Joe O’Dwyer was on target from another free but amazingly that was Killenaule’s last score for 28 minutes, as Mullinahone took control. Eoin Kelly converted a free before Paddy Codd did enough to deny Sean Curran when he went close to scoring a second goal for Mullinahone. Sean Curran managed to score a point in the 22nd minute before Michael Dunne posted a fine effort from near the sideline.

Further points from Eoin Fennelly and Sean Curran gave Mullinahone a 1-6 to 0-4 lead at the break.

There was no respite for Killenaule in the early minutes of the new half. Sean Curran was on the mark again, as was Eoin Kelly with a pair of frees.

Stephen Hannigan had Killenaule’s first score of the second half after 14 minutes, their first score in almost a half an hour, but when Michael Dunne grabbed Mullinahone’s second goal midway through the second half Killenaule appeared to be hurtling headlong towards a tame surrender of their crown.

However Kieran Bergin, Joe O’Dwyer, Stephen Browne, Declan Fanning, Tony Doyle and Matthew O’Donnell never threw in the towel and they at least salvaged some pride in the closing quarter.