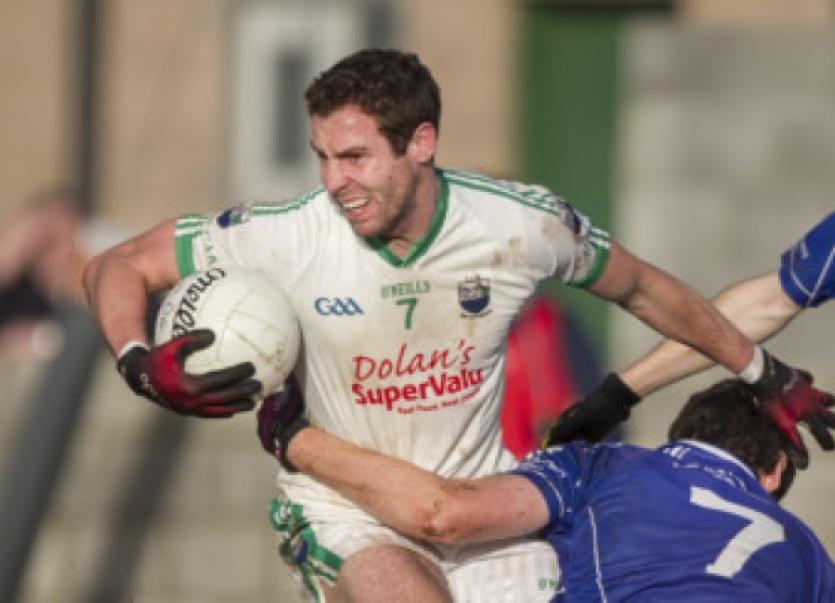 After what seems like the longest-ever season of Gaelic football, the county senior final at last comes round for decision on Sunday next, the shortest day of the year.

After what seems like the longest-ever season of Gaelic football, the county senior final at last comes round for decision on Sunday next, the shortest day of the year.

Leahy Park, Cashel is the venue for the first-ever final between reigning county champions Loughmore/Castleiney and challengers Cahir. Throw-in will be at 1.30 pm with Paddy Russell, Emly, taking charge.

Both sides have deservedly earned their place in the county’s football showpiece, even if, unusally, neither won their respective divisional titles.

Both sides earned direct entry to the county quarter-finals with 100% records in the league format.

In the knock-out stages the Mid Tipp side defeated Arravale Rovers in Holycross in their quarter-final by 0-12 to 0-8, and on Sunday last at Cashel defeated last year’s finalists Aherlow Gaels on a scoreline of 3-5 to 0-8.

Cahir needed two bites of the cherry to get past Eire Og Annacarty/Donohill in their quarter-final. The first day it finished Cahir 3-6 Eire Og 0-15 after extra-time and in the replay back at Leahy Park they triumphed by 0-10 to 0-5.

Then on Sunday last in Templetuohy Tom McGlinchey’s side upset the formbook with a 2-10 to 3-5 over North combination side Thomas MacDonaghs.

Loughmore/Castleiney will start as short favourites on Sunday next as they bid to capture their 13th county senior football crown.

Almost perennially in the shake-up when it comes to the serious end of the football season, Loughmore/Castleiney are a seasoned outfit packed with quality right through.

Midfield comprises Noel McGrath and the evergreen David Kennedy, who captains the side for the first time at 38 years of age in his 20th campaign. The backline is backboned by the likes of Tom King, Ciaran McGrath, Tomás McGrath and Lorcan Egan. They possess arguably the best forward line in the county with Liam McGrath, Liam Treacy and John McGrath all proven score takers.

Surprisingly though the strike rate of Loughmore/Castleiney in county finals is nothing to write home about. Since 1974 they have contested 15 senior football finals but have won on only six occasions. Prior to last year’s win they had to go back to 2004 and before that back to 1992 for O’Dwyer Cup success.

Manager Declan Laffan admitted “To be honest, I know very little about Cahir. Alan O’Connor with his Cahir connections is with us this year and fills me in a bit. But I would have preferred to be meeting MacDonaghs because we have played them so often, we know them well. But I haven’t seen Cahir and we don’t really know what to expect.”

“We were better yesterday than against Arravale (quarter-final). That day only six or seven got up to their standard but yesterday we had 11 or 12 performing which is all you are going to get any day,” he said.

“Cahir ran up a good score yesterday, like 2-10. At this time of the year that takes a lot of doing. But we’ll give it our best and if we can get over the line by a point that will do,” concluded Declan.

Cahir on the other hand may not have the pedigree of their opponents when it comes to county final appearances. They have contested just two county deciders - winning in 2003 when they defeated neighbours Ardfinnan; while losing out to another neighbouring club, Galtee Rovers/St. Pecaun’s, in 2008.

Like Loughmore, Cahir are a fine blend of experience and youth with the likes of goalkeeper Brian Enright, Robbie Costigan, Paddy O’Flaherty, Benny Hickey, Padraig Whelan and James McGrath all survivors from their solitary success in 2003. Adding in to the mix the likes of county senior panellist Gerald Halley, the Casey brothers Conor and Aidan, Mikey O’Connor, midfielder Liam Casey and forwards Shane Murphy and Dean Lonergan, Cahir now amount to a formidable outfit.

While the South Tipp side may not impress as much on paper, there is no doubting that as a team they are a serious outfit this season. They have been brought on tremendously by manager Tom McGlinchey who will be taking charge of the side for the last time on Sunday to concentrate fully on the Waterford inter-county manager’s job for 2015.

Tom, a Garda based in Murroe, Co. Limerick, was happy with his side’s performance against MacDonaghs on Sunday last, saying afterwards: “It was a good performance and it’s nice to win a semi-final, semi-finals are there to be won. It was a hard battle out there. We were on top at one stage, they came back at us and it was nip-and-tuck all through. But it’s only half the job done. We are in a final now and finals are there to be won.”

On the prospect of facing Loughmore/Castleiney on Sunday next, the Corkman, who managed Tipperary seniors to a Munster final replay defeat to Cork in 2002 went on to say:

“Loughmore/Castleiney are the reigning county champions. They are seasoned campaigners. They are going to be very hard to beat. It will come down to the team that makes the least mistakes and takes their chances when they come next Sunday. We both came through two tough battles today. I think it will be nip-and-tuck next Sunday and the best team will win, obviously.”

McGlinchey, backed up in the management team by Colin O’Flaherty (manager in 2003) and Paul Frazer who played in 2003, is pleased with his squad, emphasising “We have young fellows coming through and they have won minor and under 21 county titles. They are used to winning and they like winning now. There’s a nice blend of youth and experience in this team.”

What would it mean to  Cahir to win the final, I asked:

“It would mean the world for the parish of Cahir, the town of Cahir; they haven’t won since 2003. These fellows, they want to finish on a high. For whoever loses next Sunday it is going to be an  awful Christmas and for whoever wins they’re going to have a great Christmas.”

Team captain James McGrath who has been an inspiration with his drive and enthusiasm all year, ran himself into the ground in Sunday’s semi-final.

Afterwards, the captain who wears his heart on his white-and-green sleeve said:

One of a chosen few  Cahir men with a county senior medal already, James said:

“I came on to the panel in 2001. We won a South  final and I was a sub. I broke through to the team in 2003, played in the county final and scored two points. I will never forget it. It’s a long time ago now, 11 years on, and we are in another one and it’s the best feeling in the world to be from Cahir and play with your colleagues. For a lot of the older boys now it would be nice to finish on a high.”

The Cahir captain has the utmost admiration and respect for Sunday’s opponents:

“I think that Loughmore/Castleiney as a club are one of the best around, never mind in Tipperary, but in the country. They were/are reigning county senior hurling and football champions and it is just outstanding. They are such a great club. They have 30-35 lads and they might have five that mightn’t play both codes. For any club to play both codes is so hard, but to be up at the top of both is an outstanding achievement for that club. We will be really up against it on Sunday. You look at their team sheet any Sunday and it’s just riddled with talent.”

And finally I put it to James about that night in New Inn last year when they lost agonisingly in extra-time under lights to Arravale, and the injury to Robbie Costigan the same night. The team seemed so down afterwards, where did the rejuvenating spirit come from for this year?:

“There is a great spirit in this Cahir team. That night, I will never forget that night. Robbie (Costigan) got injured badly. I looked at him in the dressingroom and he looked back at me and he said ‘I might never play again.’ There was a very quiet dressingroom that night. I just said to them all I never want to feel like this again. That night really kicked it all off for this year. We looked at each other and we said we would give it one more go that night over in New Inn. We met a couple of weeks later after that and we all said we would give it one more go. That’s where it kicked off and that’s where the spirit comes from, it comes from there. We are a close enough group. There could be a big age gap between some of the older lads, some of the younger fellows are out-running the older fellows now, but it’s a bit of fun as well. But that’s what it’s all about at the end of the day, enjoyment, and we are enjoying it at the moment as a team and we are blending very well.”

All in Cahir will be hoping that on Sunday next this team can turn the shortest day of 2014 in to one of the longest nights of celebration the town has seen in a long time.