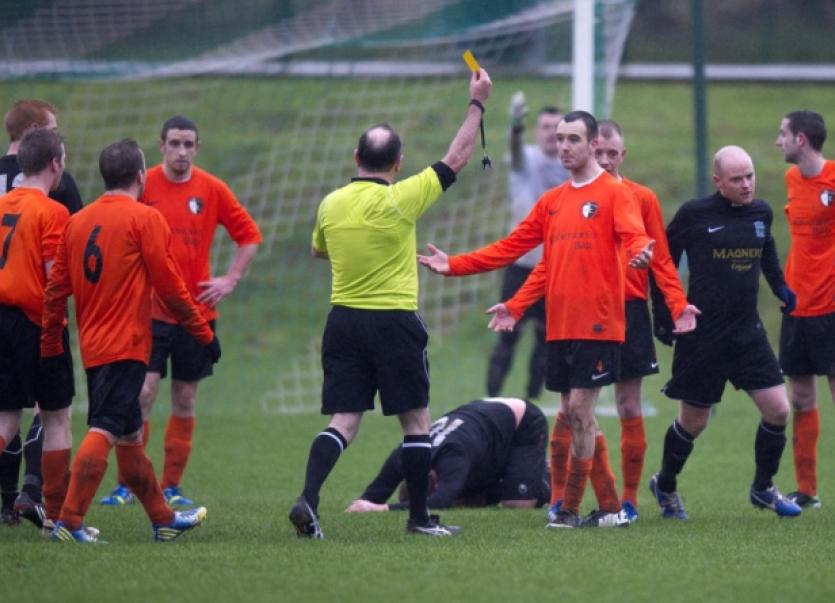 Premier Division champions Clonmel Celtic’s season went from bad to worse on Sunday last as they fell at the second hurdle of this year’s Tipperary Cup to an excellent performance from Bansha Celtic.

And this was no backs to the wall display from Bansha, as they took the game to their Clonmel opponents and took a deserved lead in the 15th minute, when a good run down the left from Gary Grogan ended with a fine cross that was slotted home from close range by Darren Stokes.

Celtic got themselves back into the game in the 27th minute through Aaron Moroney who found space in the box and calmly found the back of the net from six yards out, but the home side should have retaken the lead but for a missed penalty three minutes later, which was saved low to the keeper’s right.

The Premier team came out strong in the second half but created no real chances and on the hour mark Stokes was again on hand to take advantage of some poor defending and beat his opposing centre half to score from ten yards out.

Bansha had to defend for a while after this but apart from a couple of half chances they never looked like conceding again. In the end it was they who created the best chances of the final stages, even having what might have been an insurance goal disallowed before holding on to win the Battle of the Celtics.

In recent weeks Glengoole United have been making all the news in the TSDL with some very big scalps, but they found out on Sunday what it is like to get a taste of one’s own medicine.

Three divisions apart, it was the home team who took the spoils on Sunday, and left this year’s Premier new boys wondering what might have been as other big guns exited Tipperary’s blue riband competition.

After a lively start by both teams, it was Donohill who broke the deadlock in the twenty fifth minute when after a great passage of play, Jer O Neill was on hand to finish to the net and put the home team in front. Though this might have been the catalyst for the Premier team to up their game, they were matched every time they tried by an excellent Donohill defence marshalled by Tim Cranley. And the few times that defence were breached, they were unable to get past the young Donohill keeper Tom Carr, who put in a man of the match performance between the posts.

In the end the home team fully deserved this victory, and Glengoole were left to lick their wounds before they take part in some other big games before Christmas.

On a day of shocks in the Tipperary Cup, Clonmel Town almost followed some of the other Premier teams out of the next round of the draw, before coming from behind to beat a very solid and well drilled St Nicholas outfit.

In what was a very tight and tense first half, neither side were able to break down their opponents, and the visitors went to the break the nervier outfit. And these nerves were justified as within two minutes of the restart, the home side took the lead when after a pass from Eoin Riordan, Paddy Hennessy beat three defenders and blasted into the Clonmel net from close range.

This awakened the visitors and they threw everything at the Nicholas defence, but were thwarted time and again, especially by the brilliant performance of youth keeper Niall Fogarty in the home goal. Just as a famous victory looked on the cards however, Town equalised with 12 minutes left of the watch through a well taken goal by Shane Flynn.

Worse was to come for the home side, as visibly deflated from their concession, they were beaten for a second time by substitute Barry Ryan, who was returning from injury with five minutes left to play. Nicholas now threw everything at the visitors, but try as they might they were unable to score a levelling goal, and Town breathed a big sigh of relief to get out of this one with a victory.

Saints reserves advanced here on penalties after coming from behind twice against a very good Killenaule Rovers side. After an even opening period, it was Killenaule’s Andy Hanley who opened the scoring in the 19th minute.

However, this lead only lasted three minutes as Brian Glasheen equalised for the Saints with a left foot volley from an Oisin O’Dwyer cross.

This was how the game finished in normal time, and in the first period of extra time Glasheen struck again to put the home side in front. They looked like holding this until the end, but with time almost up Davy Noonan drove home a volley from the edge of the box to send the game to spot kicks. The visitors luck finally ran out in the shootout as St. Michael’s second team advanced to the next round.

In a hotly contested affair that spilled over at times on both sides, Fourth Division leaders Suirside beat their First Division opponents on Sunday afternoon.

Cullen were quickest off the mark and were in front after only four minutes through a strike by Shane Prenderville. Things really got hot ten minutes before the break, and both sides were reduced to ten men after a scuffle which stopped play for a number of minutes.

The half time break did nothing to cool matters, but the home team missed a gilt edged chance to level matters when top striker Darren Sweeney missed a penalty just before the hour. He redeemed himself however, as with less than ten minutes to go, he struck to send the game into an extra period. This brought no more goals from either team, and the home side finally kept the cooler heads to advance on penalties