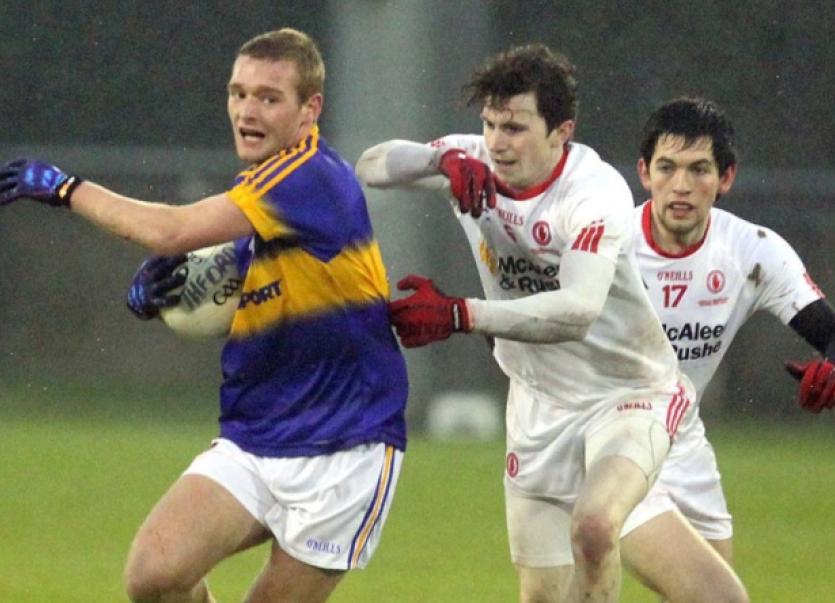 There was some controversy in the immediate aftermath of Saturday’s final concerning Tyrone manager Fergal  Logan being refused access to the Tipp dressingroom.

There was some controversy in the immediate aftermath of Saturday’s final concerning Tyrone manager Fergal  Logan being refused access to the Tipp dressingroom.

The winning manager however didn’t want to create a fuss about it when it was put to him as to why he thought Tipperary were refusing him the chance to speak to the players.

In an understanding tone he said: “It’s a very sore moment, I appreciate that, for Tipperary because they probably thought at half-time there was no way they would be beaten but we thought that would be to our advantage that they could see the winning line and then they would begin to think about the winning line. Whereas we were still at the start line and we went for broke in the second half,” added Logan.

“I don’t want to make a major fuss because I have been the subject of major fusses this last week or two. I would like to take an hour and sit down, think it through, work it out, not often it happens in Gaelic football. I’m not making a deal out of it. It was a good game of football. I thought it was a sporting game of football, but maybe not, maybe others see if differently.”

“But look, I don’t want to fuss over that, they’re very sore, we’re very happy, it’s a raw emotion at this stage. And make sure to say those words, no fuss, I’m just setting it out,” continued the Tyrone boss.

Put to him that he was obviously disappointed that this has happened he went on:

“That’s life, we all know how it happens. It’s the sorest thing. I’ve lost an All-Ireland final in 1995 (v Dublin) by a point, I lost an All-Ireland club final with Stewartstown Harps (in 2005 v Finuge of Kerry) and I finally got one at the third time of asking. So no one needs to tell me how sore it is when you lose All-Ireland finals. I finally got a jersey today, the last one standing, 32, I’d said I’d take it if we win it. So I’m happy, added the Tyrone based solicitor.

Reflecting on the game itself and what he said to his side at the half-time.

“It was a long period. I am delighted my own brother Michael, the doctor with the team, Michael Logan, went out to help a man. When he came in he told me he helped to resusitate a Tyrone man in the stand. And to be honest when I heard that I said Fergal catch yourself on, football is not that important. I was delighted that Micahel was able to go out of the dressingroom and do that. We had a long half-time, I don’t know how long it lasted and in such time we regrouped. It probably didn’t suit Tipperary because they were thinking of the winning post - we knew they’d be thinking of the winning post. Listen, how many times has it happened that you snatch defeat out of the jaws of victory. So we used that to our advantage.

“So maybe what was said at half-time worked, we won, they lost, so it worked for us. That’s not a fact, that’s just an opinion still. The fact is we won but it is still opinion and you don’t know whether these things are good or bad for you but you try and roll and ride with them because football is unpredictable,” added Logan who was backed up by legends Brian Doohan and Peter  Canavan on the Red Hands management team.

On the other hand an obviously disappointed Tippperary manager Tommy Toomey had his own opinions in the immediate aftermath of the narrow defeat to Tyrone. He described the defeat as “a hard lesson today and these things happen. Maybe we need to get a small bit more cynical. There’s a lot of stuff goes on in these games and Tipperary have to learn and I think we will over a period.”

Drawn on some of the issues in the game, the Arravale Rovers man said: “The referee calls these things. It’s part of the game at the moment. It’s happening off the ball, there’s all kinds of stuff. The rules are there to tidy it up and if they are not working what do you do? We went out to play the game in the right vein and in the right manner. Tyrone went out to play it their way. Tyrone beat us tonight and deservedly and at the end of the game they are deserving champions. They are leading on the scoreboard,” added Tommy.

On the constant fouling of Colin O’Riordan throughout?

“We knew what we were coming in to. We had the boys well versed about what to expect verbally and make sure we don’t react. I thought we dealt with it well and it’s part and parcel of the type of football we had to go out and play against today. And I give great credit to Tyrone and the way they play football. They are a fine football team. I don’t really believe they should be going at that stuff but that’s how they do it and they are happy with it. I think they are better playing football. That was a very very good game of football when you take all those little bits and pieces out of it,” concluded the Tipp manager.