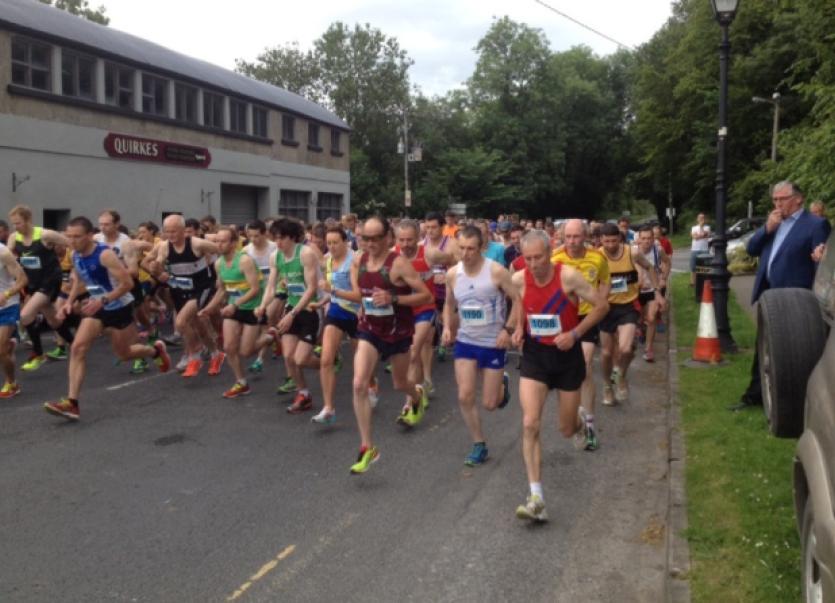 The Coillte 10k road race was run for the 30th consecutive year in Dundrum with an entry of 249 athletes, including 15 athletes in the Junior 5K.

The Coillte 10k road race was run for the 30th consecutive year in Dundrum with an entry of 249 athletes, including 15 athletes in the Junior 5K.

Appropriately with Coillte the main sponsor, Minister for Forestry Tom Hayes blew the whistle to set the field on their way.

At halfway the former Clonmel athlete Stephen Hunter was out in front and looking good with the rest of the field in Indian file behind. Seven times senior winner and Junior record holder Siobhan O’Doherty, Borrisokane was well clear in the women’s race and mixing it with the leading men.

On the second lap Stephen increased his lead and was full of running as he came home a impressive winner in a time of 32:51 to add a new name to the 30 winners of the race. Declan Moore ran a great race to match his second placing in the recent Bilboa, his own club’s 10k, in 33:34 .The ever consistent Danny Smith had another great race to match his position of 3rd last year in 33:43. In the process he also won the Tim Crowe trophy for the fourth time for the first Tipperary athlete over the line.

The trophy was presented to Danny after the race by Dominic Moore who himself finished 3rd in the first race 30 years ago. James Liddane ran on well for 4th in 34:42 while last year’s winner Kevin Moore kept the home flag flying in 5th in 34:46 with the ever improving Liam Shanahan 6th in 35:10.

In the Masters categories the two Laois men ran on well with Roibeard Miller winning the over 40 section in 34:49 and James McCormack winning the over 45 section in 34:56. The over 50 section was won in style by Mike Curley Cunningham, Mooreabbey Milers in 35:35. In the over 55 section six times winner of the Senior race Michael Hassett made a dramatic return to come home a clear first in 35:51 and in the process knock over 2 minutes off the old record. The over 60 section also had a good winner in Jim O’Sullivan from Tipp town in 41:34.

Siobhan O’Doherty, who won a bronze medal as part of the Irish team at the last European Cross Country championships, had a great race to come home a clear winner in 35:15 with Dymphna Ryan, Dundrum keeping the home flag flying with a good run for second in 40:50. Michelle Keenan made the trip from Ballyroan for 3rd in 41:09. Another Dundrum athlete Catherine Kelly ran a solid race for 4th in 42:49, Angela Fogarty, Moyne had a great run for 5th in 44:20 with Jacqueline Hughes, Thurles Crokes 6th 44:41.

In the Master categories Kate Kennedy, Templemore was first over 35 in 44:24. Stephine Johnson, Clonmel had a good win in over 40 in 43:42 while Deirdre Finn made the trip from Derg AC for a great win over 45 in 43:10. Eileen Carey continued a good night for Thurles Crokes with first over 50 in 50:40. Bernie Prendergast, West Waterford took first over 55 in 47:51.