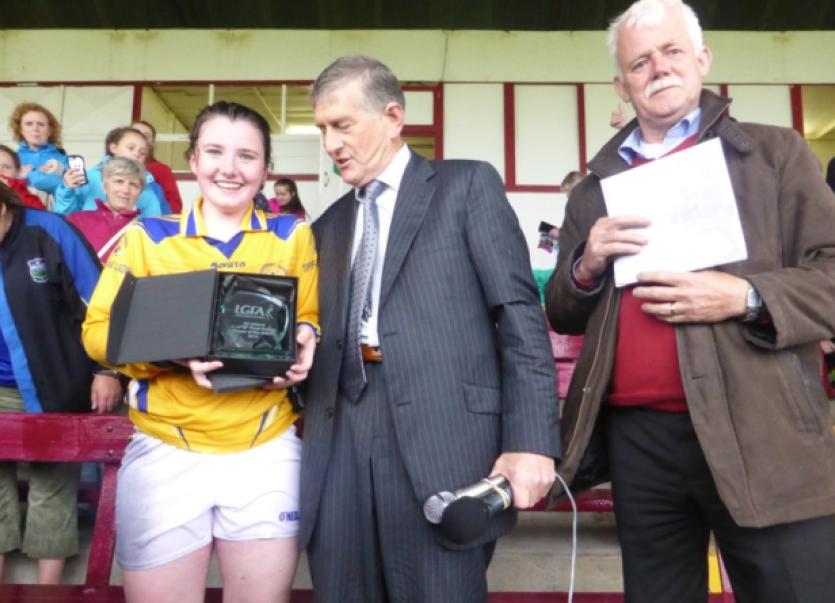 Tipperary captured the All-Ireland Under 14 B Ladies Football title on Saturday courtesy of six point victory over Donegal at Tuam Stadium, 2-10 to 1-7.

Tipperary captured the All-Ireland Under 14 B Ladies Football title on Saturday courtesy of six point victory over Donegal at Tuam Stadium, 2-10 to 1-7.

Seven days previously, prospects of All-Ireland silverware looked remote but two injury time goals secured a replay. As with typical Irish weather it had deteriorated to a very wet and windy day with the wind blowing from one goal to the other.

Donegal won the toss and opted to play against the wind. Tipperary took full advantage of this in the first two minutes with a Caitlin Kennedy goal and two points from Angela McGuigan and Caitlin Kennedy. Donegal’s first point in the sixth minute was from Amy Boyle Carr.

The teams traded points before Angela McGuigan pointed a free and Caitlin Kennedy added another point for Tipperary stretching their margin to six points entering the second quarter. Tipperary were looking the stronger team but the defenders for both sides were the dominant ones as there was no scores for the next eight minutes.

Kate McClenaghan added to the Donegal score line with a point, the last for the half. Ciara Dwan and Ruth Butler each pointed for Tipperary leaving the half time score 1-7 to 0-3.

A revitalised Donegal team returned and with the aid of the breeze added a Megan Havlin goal and a point courtesy of Clodagh Ní Ghallchóir. Suddenly, there was only three points between the sides.

Two more points from Tipperary’s Ellie Ryan and Angela McGuigan were traded with two points from Clodagh Ní Ghallchóir. Substitutions made as the game approached the final quarter re-energised the Tipperary side with Emma Ryan putting Tipperary in front by four heading in to the closing stages. Mya Alcorn responded with a point in the 62nd minute but as Donegal pushed forward seeking a goal, it was Tipperary who once again came up trumps in injury time as Eimear Boland raised the green flag and ensure the title was going back to Tipperary.

The team’s never say die attitude won each game for them. Throughout the year they had provided thrilling games and they have received their reward now, well done girls. A special mention to the parents of the ladies who gave up their time to attend training and matches.

Thanks to Kevin O’Leary, Clonmel for sponsoring the team. Well done to all the supporters who travelled the long journey with the team.