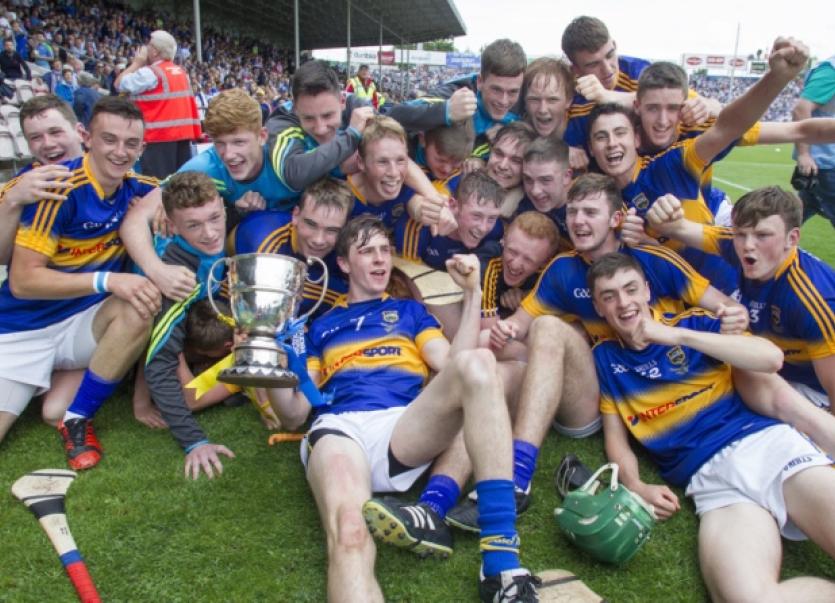 Tipperary minor hurlers hit four late points to deny Limerick three-in-a-row titles and set up the first half of a wonderful Munster double at Semple Stadium on Sunday.

Tipperary minor hurlers hit four late points to deny Limerick three-in-a-row titles and set up the first half of a wonderful Munster double at Semple Stadium on Sunday.

Trailing by one, 0-17 to 0-16, with seven minutes to go, Tipperary held Limerick scorless for the remainder of the game but tagged on four themselves to win the county’s first title since 2012 and 38th in all.

Man of the match Lydon Fairbrother hit the equaliser from a free and then added two more to make it 0-19 to 0-17.

Shane Neville completed the scoring to signal great celebrations from the Tipperary players and supporters and put the side straight through to an All Ireland semi-final.

There was less joy among the Limerick faithful as they were unhappy with referee Cork Joe Larkin blowing up nearly forty seconds short of the alloted two minutes injury time - and at a time when they were pressing in the Tipperary half.

But Tipperary manager Liam Cahill didn’t want to get into the debate.

The Ballingarry man said - “Let’s be honest, if we were beaten today there could have been a lot said about what went on between the white lines, but what good is that? We know they (the decisions) are not going to be reversed. The final whistle was blown and it was over. That’s best left between the white lines and that’s the way it should operate all the time”.

Cahill was delighted with the team’s win and is already looking forward to Croke Park.

“They showed tremendous character. We beat Waterford back in April and people said it was a poor minor team. They are not the best minor team ever to leave this county, but they showed some heart, not just today but all through the Clare and the Waterford games. It came out again there today. These boys will never give up. I am delighted for the players.”

Team captain Stephen Quirke was also there to share the celebrations. The Moyle Rovers man was unable to play through injury but accepted the cup along with Darragh Peters.

Tipperary made a great start with Liam McCutcheon scoring after just eleven seconds. Alan Tynan and Cian Darcy added to the tally and the home side led 0-3 to no-score after three minutes.

Limerick responded with points from Peter Casey (two, one free) and Michael Mackey to tie the game by the ninth.

Séamus Flanagan tied the game in the 19th minute before Garry Ryan won a great ball in the 21st minute and hit over a point which helped Tipp to a 0-5 to 0-4 lead.

Two points from Peter Casey (one free) helped Limerick back into the lead before Tipperary enjoyed a great opportunity to break the game open in the 23rd minute - David Gleeson hand-passed across the face of goal where Cian Darcy opted to pull first-time and Limerick ‘keeper Eoghan McNamara saved brilliantly.

Two minutes later Tipp were level thanks to a David Gleeson effort, but Limerick closed out the half well and led 0-10 to 0-8 at the break with Peter Casey firing over three frees and two from play with only Darragh Carey managing a response for Tipp.

Tipperary started the second half well when Lyndon Fairbrother converted two frees, one from a tight angle and another from long-range, to tie the game. Then, in the 35th minute, an Alan Tynan effort presented Tipp with the lead. There was an opportunity now to attack the lead and Tipp did so thanks to a left-handed shot from Garry Ryan (0-12 to 0-10).

But Limerick responded and Peter Casey fired over three frees and when Thomas Grimes added a point Limerick led 0-14 to 0-12 by the 42nd minute.

Tipp hit back through Tommy Nolan and Lyndon Fairbrother to take the lead with twelve minutes to play before a Casey free tied the game and then Barry Murphy fired Limerick into a 0-17 to 0-16 with 53 minutes gone.

But that was when Tipperary showed their mettle and lived up to the trust placed in them by manager Cahill.

Urged on by a vocal crowd, Fairbrother first tied the scores from a free before adding two more, one a free, to put the home side in the driving seat.

The insurance point came from Shane Neville but Tipperary were still susceptible to a Limerick goal which might have come if the full injury time had been played. Thankfully for Tipperary, it wasn’t and they led the way to Munster glory for the seniors to follow later.