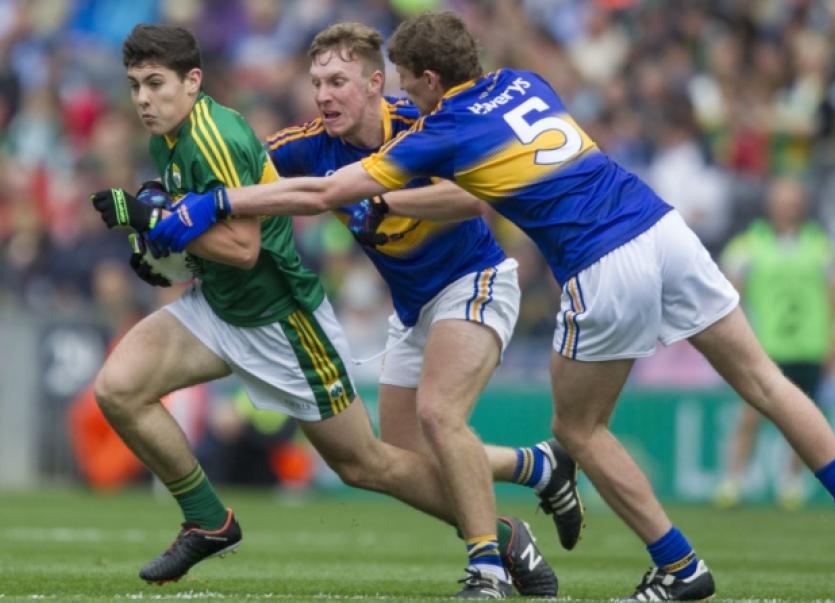 The manner of the conclusion of an what had been an incredible journey for Tipperary’s minor footballers was a cruel and devastating experience as they capitulated to an awesome Kerry team who cruised to back to back All-Ireland titles in Croke Park last Sunday.

The manner of the conclusion of an what had been an incredible journey for Tipperary’s minor footballers was a cruel and devastating experience as they capitulated to an awesome Kerry team who cruised to back to back All-Ireland titles in Croke Park last Sunday.

Tipperary froze on the day. A nervous start, which saw them squander a close range free, hit a poor wide and put themselves under enormous pressure trying to play a short kick out which resulted in the concession of a sideline in the opening minutes, morphed into a full blown meltdown.

Even though Kerry were hot favourites, few expected Tipperary to be so uncompetitive on the day but they were dominated all over the field by a Kerry team who dictated the terms from start to finish.

It was a harsh football lesson for a group of young men who had brought so much pride to their county during the year which saw them defeat the Connaught and Leinster champions to secure their right to participate in one of the greatest sporting occasions of the year.

Losing is a painful experience, particularly so when collectively the players know they did not do themselves justice on the day, They can be immensely proud of what they achieved during the year.

During that memorable campaign Tipperary travelled to Killarney to take on Kerry in a Munster final and showed tremendous spirit in raising their game after being blitzed early on by a rampant Kerry.

The manner in which an understrength Tipperary salvaged something from that provincial final, even though they lost by six points, and the way they picked up momentum following that defeat gave rise to hopes that they could get even closer to Kerry on this occasion.

Unfortunately, Kerry, as manager Jack O Connor explained afterwards, noted what lessons they had to learn from Munster final day and ruthlessly implemented their game plan in Croke Park, quickly extinguishing any hopes Tipperary may have held of causing an upset and cruising to an emphatic victory.

O’Connor was unhappy with two features of his charges play in Killarney - Tipperary’s ability to win a majority of possession from kick outs and the failure of his team, who enjoyed a commanding half time lead, to go out and do what they were asked to do at half time - win the second half.

It was clearly evident that Kerry worked intensely on those two aspects of their game.

Mark O’Connor was outstanding at midfield for the champions and his masterful display in fielding kick outs was an integral feature of Kerry’s powerhouse performance. Whatever combination Tipperary used in midfield to counter his influence made no difference and on this occasion when Kerry secured a comfortable cushion, they never let up. They attacked relentlessly and there was no slacking off on as they cruised to a comfortable twenty point victory.

Their fluidity, tigerish defending, intelligent use of space and slick passing meant Tipperary were chasing shadows for the hour.

Tipperary players could not get close enough to put any pressure on the Kerryman in possession. It was a flat team performance and the confidence they had shown for periods of the game in Killarney and the excellent displays against Kildare and Galway in which they had kept clean sheets in both games slowly evaporated as Kerry stamped their authority on the game.

Of the starting six Tipperary forwards, Alan Tynan was the only one to score. Four were substituted with none of their replacements managing to register a score on the day.

Tynan took three excellent points from play, midfielder Tommy Nolan scored a point in each half and their six point tally was completed by a free from Jack Kennedy.

Kerry won possession from the kick outs by sixteen to eight in the first half. Tipperary managed to get very little ball into Stephen Quirke, Brian McGrath and Brendan Martin in the full forward line and when they did, the ball was not of the quality required to overcome the screening player Kerry deployed in front of Quirke and Martin.

Their threat in front of goal dissipated as a result of the need of manager Charlie McGeever to deploy both Quirke and McGrath on occasions in midfield during the first half to try and combat Kerry’s dominance in that area.

As expected Conor Geaney, just as he was in Killarney, was a handful for the Tipperary defence. He finished with two penalties and four points (two from play).

The well taken penalties came at crucial moments in the game. Kerry’s opening goal came after nineteen minutes when for the first time their long ball strategy into the full forward line paid off. Centre forward Sean O’Shea broke it down to full forward Bryan Sweeney and he blasted to the net. Two minutes later Brian Sheehan added a point and Kerry were holding a six point lead.

A minute later disaster struck and Kerry killed off they game when they punished Tipperary whose attack broke down when Jack Kennedy was dispossessed in front of the Kerry goal. In a swift counter attack they made up ground with a penetrative move which resulted in Tommy Lowry taking down Geaney in front of goal and Geaney dusted himself down and slotted the ball home, placing it into the bottom corner.

It gave Kerry a nine point lead and there was no way back for Tipperary at that stage.

Thirteen minutes into the second half Geaney stepped up again to take a penalty after a cross field pass from substitute Ross Peters went astray. It put the Tipperary defence under enormous pressure and corner back Tadgh Fitzgerald, who was shown a black card, had no choice but to take down the Kerry man in possession bearing down on goal. Geaney confidently converted the penalty for Kerry’sfourth goal on forty four minutes to give Kerry a 4-10 to 0-6 lead.

Kerry, afforded the luxury of being able to empty their bench in an All-Ireland final, tacked on four more points as the Tipperary players could not wait for the final whistle to be blown to put them out of their misery.