Tropical conditions see ‘Indigojack’ turn the heat on with stunning 28.78 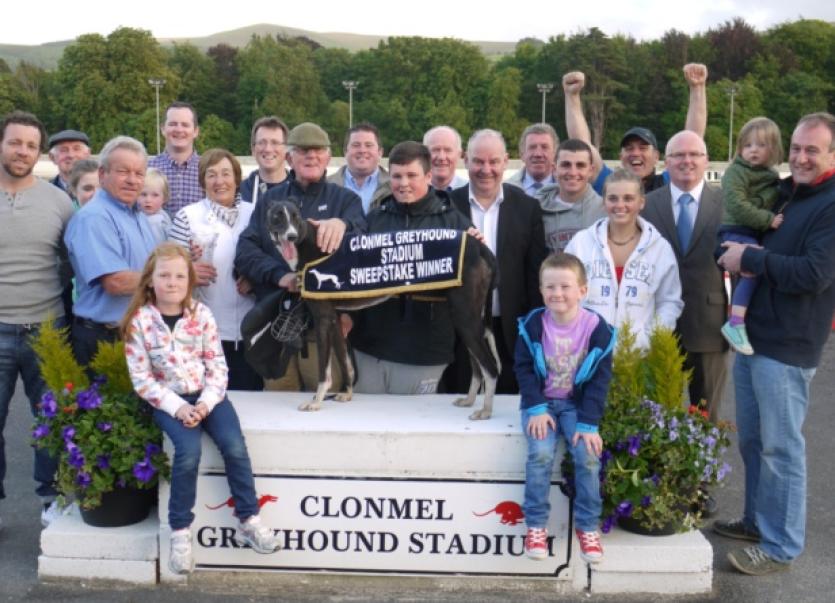 The major attraction was the first round of the €3,000

The major attraction was the first round of the €3,000

to the winner Surehaul/Mercedes/B.I.F. Open Unraced Stake and at the end of an interesting six heat

opener Indigojack trained by Dara Morrissey for Rathfarnham enthusiasts Larry and Jack O’Shea topped the order of merit with a smashing 28.78 run on the hottest evening of the year.

Fiery Splendour from the Owen McKenna kennel showed that he will be a leading contender for outright honours when clocking 28.84 whilst Tina Cooke’s Lughill John was another to impress when making all the running in 28.88.

The other three heats went to local connections headed by Elizabeth Lonergan’s Nomadic Loner which clocked 28.96. Jennifer O’Donnell saw her Winning Merry score in 29.05 whilst James Daly took the final heat of the evening with Lacken Hero which stopped the clock in 29.37.

The complete second round of the stake should prove a major attraction at the Suirside venue on Sunday evening next.

Favourite Moment was supported to evens in the opening leg and he led for much of the trip but had no answer to the finishing burst of the 9/4 chance Risk of Ice which took control off the final bend and stayed on well to score by two lengths from the jolly in 29.23.

The always prominent Moreton Moonglow filled the third spot just half a length in arrears of the principals.

Owned and trained in Annestown by Richard Dunne the winner is a son of Droopys Vieri and Lough Carra and he was gaining his second success from four starts.

The second semi saw outsider Black Jack lead to the back straight where the 6/4 joint favourite Bate the Sweets led on the outside before just holding the renewed effort of Black Jack and the flying late finish of Strides Cougar in an exciting climax.

The margins were half a length and a length and the winner clocked 29.43 in following up his first round triumph.

The son of Head Bound and Melwood Pearl is owned and trained in Dripsey by Ned Barrett.

Race 3 (A2) – The favourite Sidarian Jaguar, a Produce Stakes finalist, continues to disappoint and he could only finish fourth here behind the impressive Stanleys Dream which romped clear of his rivals to gain a fifth career win for trainer Niall Dunne and Cashel owner Thomas Barrett in 29.00 just four spots outside his best.

The son of Flying Stanley and Margarets Hill came home six and a half lengths ahead of Chamberlain Aine and Daring Hawk.

Race 4 (Heat 1) - Lughill John, a 2/1 chance, got this prestigious unraced stake off to a fine start by making all the running on the rails and putting his rivals to the sword by surging to a ten length win in 28.88.

Turbo Dee Jay tried to go with the winner in the early stages but Lughill John hit another gear in the home straight and Turbo Dee Jay just held second place by the narrowest of margins from Mustang Miata and Jacksabullet with the first four going through to the second round.

The winner is a son of Kinloch Brae and Pams Lilly owned and trained in Monasterevin by Tina Cooke.

Race 5 (Heat 2) – Dundonnell set out to make all for trainer Declan Byrne and was followed by the favourite En Route and Indigojack on the back straight.

Indigojack took second place at the penultimate turn and stretched clear impressively in the home straight to defeat a flying Express Micro which got up to take second spot by a short head from En Route with Dundonnell in the other qualifying spot.

Indigojack (Head Bound – Blasket Music)which is trained by Dara Morrissey for Rathfarnham enthusiasts Larry and Jack O’Shea clocked a smashing 28.78 which was to prove the fastest run of the round.

After Soviet Cooney and Hypnotic Reason had shown early pace Fiery Splendour got a fine run on the outside round the early bends and stormed clear to record a decisive nine length success in 28.84. Soviet Clooney, Hypnotic Reason and Blastoff Denny filled the minor placings in that order but only one greyhound counted from a long way out and the winning son of Tubbertelly Dubh and Any Time Again should be a force to be reckoned with in the concluding stages of this valuable stake.

Race 7 (Heat 4) – Lughill Dano was an odds-on chance to record a double for Tina Cooke but in a session that brought little joy to punters this jolly could only finish third having had every chance. He set off in front but Jennifer O’Donnell’s Winning Merry joined issue approaching the final bend and finished well to hold the good late run of Ballintine Star by a neck with the favourite a length and a half back ahead of Smooth Joker. Winning Merry is a son of Skywalker Ace and Hollys Wish and he stopped the clock in 29.05.

Race 8 (Heat 5) – Lughill Edward became another losing jolly in a heat which saw local runner Nomadic Loner owned and trained by Elizabeth Lonergan record an eight and a half length win over Mountaylor Air. The winner, successful in his three trials, is a son of Eden Brett and Nomadic Sal and he landed a few bets with the minimum of fuss.

Lughill Edward and Minor Ruso were the other qualifiers from an event which saw Nomadic Loner stop the clock in 28.96.

Race 9 (Heat 6) – Only four went to traps for this final heat and consequently all were assured of a place in the draw for next Sunday’s second round. Under Milkwood was the market leader at 6/4 but it was the 3/1 chance Lacken Hero running for local enthusiast James Daly which took the spoils by a length from the jolly with Madigans Sammy hald a length back in third spot ahead of Mountaylor Night. The winner, a son of Ace Hi Rumble and Skywalker Angel clocked 29.37.

Run of the Week was from ‘dan the man’

The accolade has to go to David Hickey’s Dan the Man (Barefoot Bryan-Natural Energy) whose sprint success in clocking 16.13 on Thursday was a top drawer performance.

Lots of prospects were on view in the first round of the major unraced open on Sunday and our pick was Fiery Splendour trained by Owen McKenna for Eimear Coffey whose 28.84 clock was full of promise.

The eye-catcher on an above average Thursday card was David Hickey’s sprinter Dan the Man which gave the performance of his life by surging clear of Lyreen Quest on the run to the bend and romping home by three and a half lengths from that rival in a brilliant career best 16.13. The son of Barefoot Bryan and Natural Energy was gaining a second success from ten runs having got off the mark with a 16.32 run in Clonmel last December.

The meeting featured the four first round heats of the Tina’s Florist/Central Grill A4 Tri/Distance Stake which were run over the standard trip and the semi-finals of the O’Rourke’s Meats and Track Supporters Club A6/A7 Stake. Gortkelly Bebe owned and trained in Thurles by Andrew Murray was the pace setter in the tri/distance event by clocking a career best 28.98 the fastest run of the night. The A6/A7 Stake semi-finals were won by Suir Millie in 29.20 and Clover Shaw in 29.71 whilst earlier the evening got off to a fine start with a splendid 29.18 run from Expert Lad in the opening novice event.

Race 1 (N1/N2) – On the previous Thursday the opening event was won by the Kennedy family from Thurles with Dynamite Kid (Westmead Joe-Expert Flash) which came in as a reserve to score by nine lengths in 29.66. History was repeated here as her comrade Expert Lad running for Maria Kennedy also came in as a reserve and was well supported to 6/4 in a race which saw the Owen McKenna trained Exciting Destiny go to traps a warm 4/5 favourite. After Rich Joey had led, Expert Lad took up the running on the back straight and raced away for a very impressive eight and a half length victory over the favourite in a smart 29.18. Coolbeggan Honey ran on late to take third place.