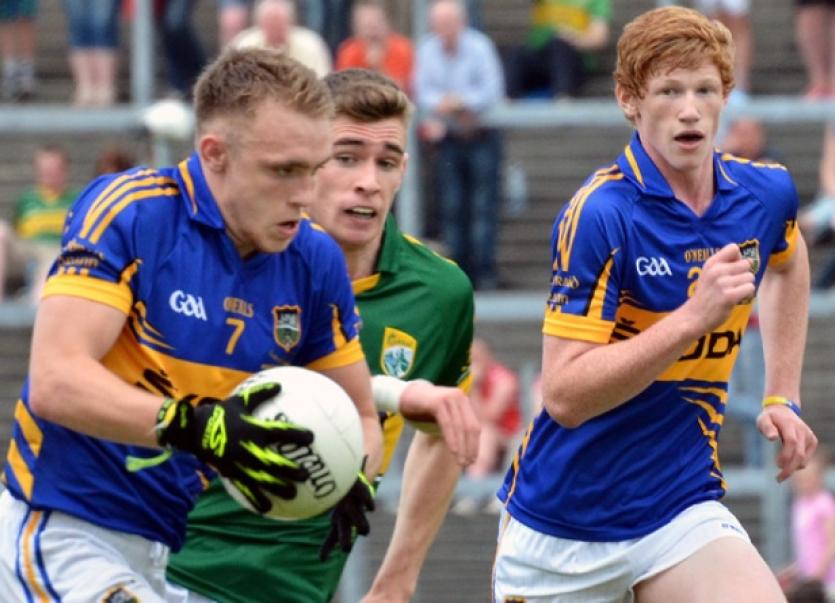 HOPES of an historic three-in-a-row of Munster minor football titles for Tipperary evaporated in defeat to Kerry in the searing heat of Fitzgerald Stadium, Killarney, on Sunday last.

HOPES of an historic three-in-a-row of Munster minor football titles for Tipperary evaporated in defeat to Kerry in the searing heat of Fitzgerald Stadium, Killarney, on Sunday last.

However all is not lost with provincial final defeat. This team still have another chance of ultimate glory with a guaranteed place in the last eight of the All-Ireland competition.

That quarter-final game will be against the Ulster champions in a few weeks time, and in the words of team manager Charlie McGeever, when speaking post match said “we have gained a lot from today.” Time will tell.

Tipp went into Sunday’s final carrying the dubious label of favourites, but they were under no illusions of the magnitude of the task they were facing.

Taking on Kerry in their own backyard, football’s elite contesting their 17th provincial minor football final in 18 years, was a task almost as sizeable as the Magillacuddy Reeks in the Stadium backdrop. While Tipp may have lost the battle on the day, there is nothing to say they can’t regroup and come again.

Games can be won and lost in a moment and perhaps this game’s most significant incident occurred a minute before the interval when Josh Keane was dismissed for a second yellow card. Trailing at that stage by 0-8 to 0-4 and now with a full second half to face with a man less, it would have taken a miracle for Tipp to come back. There was to be no miracle in Killarney.

Tipp opened brightly and had the first score inside a minute through centre-forward Josh Keane. But the advantage was shortlived with Kerry’s outstanding player Jack Savage equalising with a free.

Over the hour Savage scored 10 of his sides 15 points, eight coming from frees (kicked with both feet) and two from play. A worrying fact going forward for the Tipp boys is the number of frees conceded close in.

Tipp were back in front in the third minute when their man-of-the-match Colin O’Riordan kicked a sweet point from play. The midfield triangle of Liam Casey, O’Riordan and Keane were having the better of the early exchanges.

Firstly Shane O’Connor levelled from play, then two frees from Savage, followed by a delightful point from young Killian Spillane of Templenoe, a son of Kerry great Tom.

Tipp were to go 14 minutes without a score and then had two within a minute, both excellent efforts from midfielder Liam Casey.

But the response from Kerry was even more emphatic, three points in three minutes put them 0-8 to 0-4 clear after 22 minutes and ominously they were beginning to open up the Tipp defence. Savage had the first of the three points with a free, then Shane O’Connor and Conor Keane joined in.

At this stage four of the six Kerry forwards had scored, and one who hadn’t, captain Kevin Shanahan, was called ashore in the 22nd minute. The Kingdom were very serious in their intent.

In the run-up to the interval Josh Keane was given a second yellow for a high-arm tackle on Kerry’s Matthew Flaherty. It was a harsh enough decision by a fussy referee and spoiled what might have been a classic second half.

On the stroke of half-time Colin O’Riordan had a mighty point for Tipp who, despite numerical disadvantage, were never going to roll over.

At the interval Tipp made a double substitution bringing on Padraig Louram and Stephen Quirke to the half-forward line and the effect was immediate.

Within three minutes of the restart they were level following two frees from Alan Tynan and a point from play from Liam Casey. Perhaps a fightback was on the cards after all.

Alas no, and again the concession of softish frees allowed Kerry off the hook. Kerry were now playing with the extra-man in a sweeping role. Each time Tipp committed a misdemeanour Jack Savage punished them and frees in the 34th, 40th and 43rd minute undid all the promise of the second half resumption. (0-11 to 0-8)

Tipp’s Alan Tynan pointed from play (the only score from play by any Tipp forward in the whole game) but it was cancelled out by another Jack Savage point, his first from play, in the 46th minute.

Colin O’Riordan, with an extraordinary engine, never stopped working all day long, and his free in the 48th minute was to be Tipp’s last score of the game.

In the closing 10 minutes or so Tipp, as would be expected in the circumstances, tired visibly and Kerry added on three points, through Conor Keane and brace from Savage, one a free.

At the death Tipp were awarded a penalty which keeper Jack Brady came to take. In summing up Tipp’s day Kerry keeper Shane Ryan got down to block and with it the final whistle blew.