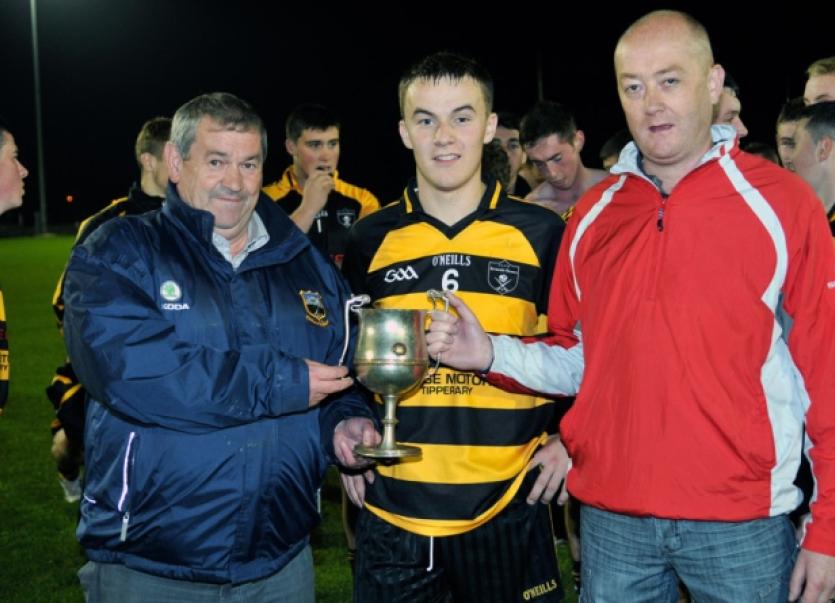 Arravale Rovers were too strong for Eire Og/Galtee Rovers in the Bridge House West MFC ‘A’ final under lights in New Inn.

Arravale Rovers were too strong for Eire Og/Galtee Rovers in the Bridge House West MFC ‘A’ final under lights in New Inn.

David Finnane and Conor Kissane swapped points before a combined move involving Tommy Lowry, Eoghan Coughlan and Conor Kissane set up Andy Cummins for the lead point for Arravale. Finnane set up the excellent Darren McGrath for a well taken goal to put the combo ahead 1-1 to 0-2.

A Cummins goal put Arravale 1-5 to 1-1 but there was only a point in it at the break following two points from Finnane placed balls and a marvellous Darren McGrath score from the right sideline.

Arravale dominated the second half and the combo failed to raise a flag until five minutes from the end through Steven O’Dwyer. Rovers tacked on four unanswered points, two each from Conor Kissane and Niall Leahy.

Rovers backs were excellent ably marshalled by captain Ciarán Lowry. Ciaran Leahy, the Lowrys Ted and Tommy and Pearse Richardson were well on top despite the best efforts of their opponents Daire Egan, David Finnane and Darren McGrath, while Tony Byrnes and Darragh Coughlan were doing well at midfield against Kevin Power and Tom Fox.