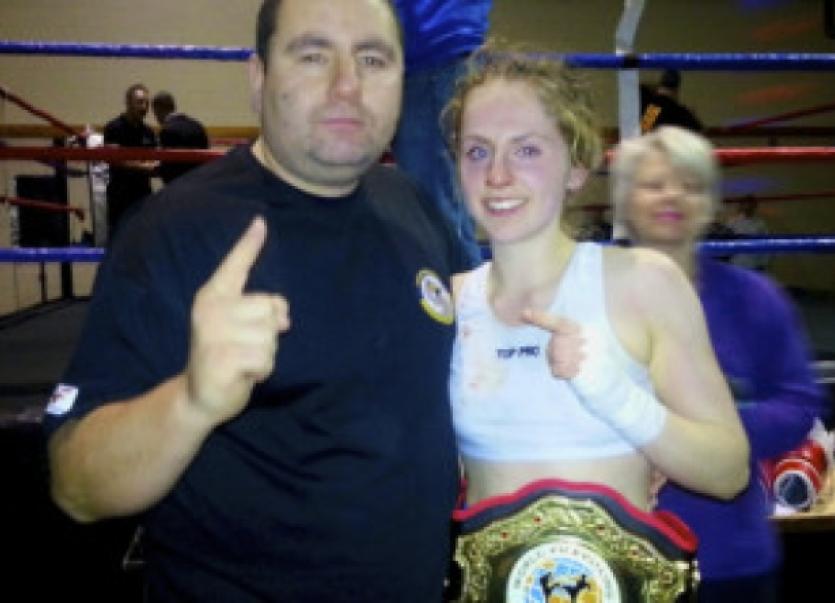 This rising star trained six days a week getting up at 6.30am to run and train every evening after school in the months leading up to the World Federation competition.

“Hard work really does pay off,” said her coach, Craig Sutton from the Tipperary Kickboxing club.

“It’s a honour to train a person like Lisa and this is just the start for her as the sky’s the limit!”

The surprising aspect of this great achievement is that Lisa only started kickboxing two ago. “I thought it would be a good way to keep fit and healthy and I started kickboxing when I was 15 years old, just going into my Junior Cert. year. Craig suggested that I started competing and in 2012 I won a boxing fight in Dungarvan, Co. Waterford. This gave me a taste for competition and it was only in October this year that Craig and I decided I would go for the World Kickboxing Federation title. I was already training three times a week and from there I upped it to six days in preparation, said Lisa.”

Lisa’s father, Timmy Moloney was the coach for Aherlow GAA and passed away in 2007. “My father encouraged my brother John and I to play hurling and football from a young age and I played for played for Aherlow Ladies football.”

Lisa, a student of St. Anne’s secondary school, is taking a break from kickboxing, (now training only 3 nights a week), to concentrate on her Leaving Cert. and has plans to study food science and health at the University of Limerick.

“I’m really happy to have won the title and I’d like to thank my mum Margaret who drove me into training every evening and gave me great support. Thanks to Craig and everyone else who supported me,” said Lisa.