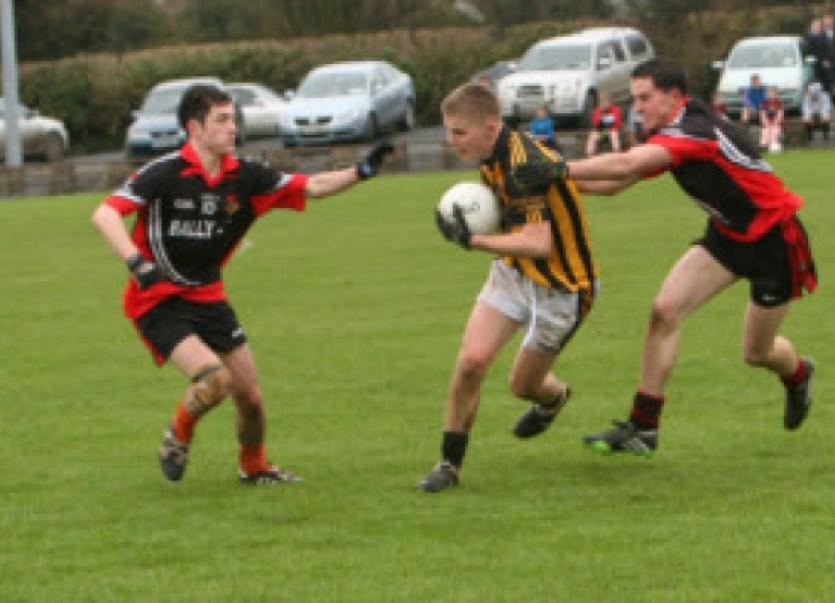 A tremendous second half saw Upperchurch Drombane beat Ballyporeen to claim the County Minor B Football championship on Sunday afternoon last in Golden.

A tremendous second half saw Upperchurch Drombane beat Ballyporeen to claim the County Minor B Football championship on Sunday afternoon last in Golden.

It was a disappointing end to a wonderful campaign for Ballyporeen but they can take great credit from their performances to the final where they lost to a very strong Upperrchurh side.

After a tight and tense opening period both teams launched into the second half with renewed purpose and the decisive moment in the match came courtesy of the decisive player on the pitch, Paul Shanahan.

As the game sat on a knife edge down the stretch Shanahan emerged from the shadows and took the game by the scruff of the neck and with six minutes of normal time remaining on the clock he conjured the game’s changing moment.

Collecting possession over 50 yards from goal the rangy midfielder was well marshalled by his marker and after edging just a few metres closer to the target directly in front of the posts he decided to launch an attempt towards goal with his trusty left boot.

The shot never looked like it was going to carry enough purchase to clear the crossbar but a frenzy of movement by the Upperchurch full forward line created consternation for the keeper when they ran across his path and as the ball bounced inside the square without a noticeable touch it made its way into the net.

This goal put Upperchurch a goal ahead but credit to Ballyporeen they did not wilt and valiantly responded with two tremendous points, one from reliable free kick specialist Fionan O’Sullivan and another a superb right footed effort from distance by William English narrowed the gap to a single point again.

However all this set the stage for the relentless Shanahan and as normal time elapsed he found himself surging forward once more.

Receiving a hand pass on the left wing and 30 yards from the target he did not waste a second and instinctively swung his left boot floating over a sumptuous point that made it a two point contest and effectively sealed the victory for Upperchurch Drombane.

There is no doubt Upperchurch will be elated having had a terrific win over Loughmore in the Mid Tipperary decider it is an unknown minefield heading into the county series but the level of commitment shown on Sunday makes them worthy champions.

Ballyporeen also played their part in an incredibly exciting second half and although disappointed their players will develop from such an experience.

The first half of the match was slightly fractured and had less flow and intensity compared with the second however there were some flashes of quality as in the opening minute Adrian English registered the first of his three points collecting a lovely Jason Cahill pass and drilling it over with his right boot.

Gavin Ryan pulled off a superb save in the 20th minute as Adrian English collected just left of the target and stepping away from his marker fired at goal only for the keeper to expertly tip over the bar.

This score left Upperchurch trailing by three points but they hauled themselves to within one before the break with Robert Murphy scoring with a fine effort off his right and Paul Shanahan converting off his left after a well executed quick free kick leaving the half time score 0-4 to 0-3 in favour of Ballyporeen.

Jason Cahill set up Adrian English to score and then fired over from close range himself for Ballyporeen to leave them two points in the ascendancy ten minutes into the second half.

Upperchurch then made a decisive move in bringing Gavin Ryan out of goal and having emerged he won more than his fair share of possession and drove forward well with the ball.

As Upperchurch ran at their opponents’ defence they drew fouls and Shanahan from the right converted those suiting a left footer while Niall Grant and Ger Grant converted one each that were more suited to a right footed strike.

This had the teams locked at eight points apiece before Shanahan emerged with the game changing moments of magic that sealed victory and County title success for Upperchurch Drombane.