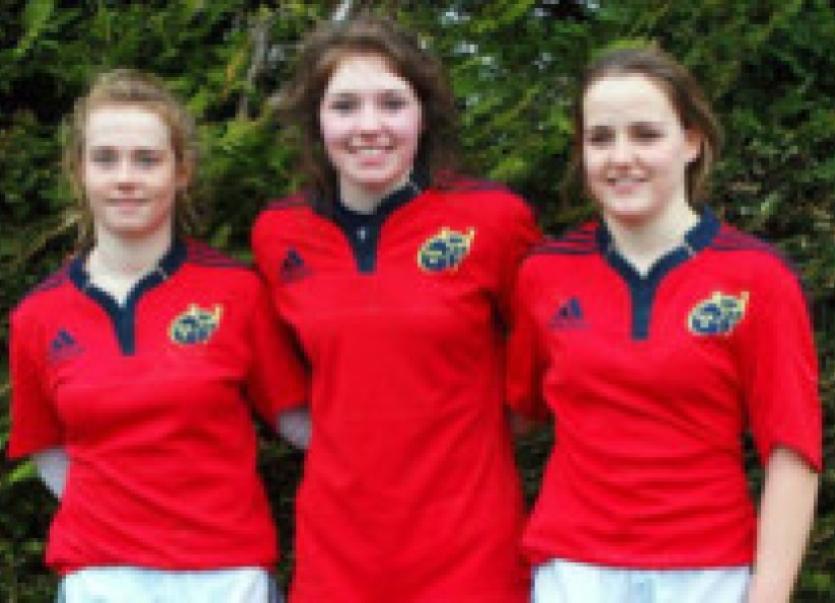 Carrick-on-Suir RFC’s Aoife Moore, Chloe Blackmore and Kate English all wore the red of Munster with great distinction in the Under-18 interprovincial blitz meetings with Ulster and Leinster.

Carrick-on-Suir RFC’s Aoife Moore, Chloe Blackmore and Kate English all wore the red of Munster with great distinction in the Under-18 interprovincial blitz meetings with Ulster and Leinster.

Their club mates Zoe Lynch, Ciara Lonergan, and Faye Drohan, who also made the cut for the provincial squad, were unfortunately ruled out of the action due to injury.

The matches were played at Westmanstown in West Dublin, with Munster seeing off Ulster in their opening match before losing 3-0 in a tightly fought contest with Leinster in the second fixture of the afternoon.

“This was a great achievement for all involved, to have three players playing in a Munster team and to have six players from our club represented in the squad,” according to Club President Tony Musiol.

“Now lads and men, beat that!”

The strides which the Ladies Club has made in its short existence have been nothing short of phenomenal, and their efforts were saluted by Ireland international Niamh Briggs during her recent visit to Carrick-on-Suir.

“Kate O’Loughlin has shown the way for these young players given what she achieved with Munster and Ireland,” Niamh told ‘The Nationalist’.

“There’s clearly a lot of great rugby talent in the area, and they’re in fantastic hands with the coaches the club are fortunate to have looking after them, so fingers crossed, we’ll see some of these girls developing into top class senior players with both Munster and Ireland a few years down the line.”

For a locality synonymous with cycling and soccer talent, and with its fair share of precocious hurlers down through the years, Carrick-on-Suir now looks in line to become synonymous with outstanding ladies rugby footballers.

We shall watch this group’s progress with no little interest in the coming seasons!

At Clonmel RFC on Friday, December 6 at 9pm, Denis Leamy, ex Munster & Ireland, and Niamh Briggs, Irish Women’s Player of Year 2013 will recount some of their experiences and give insights into what it takes to make it in sport at the highest level. This will be followed by a Q & A session where you can ask the questions you always wanted to ask!