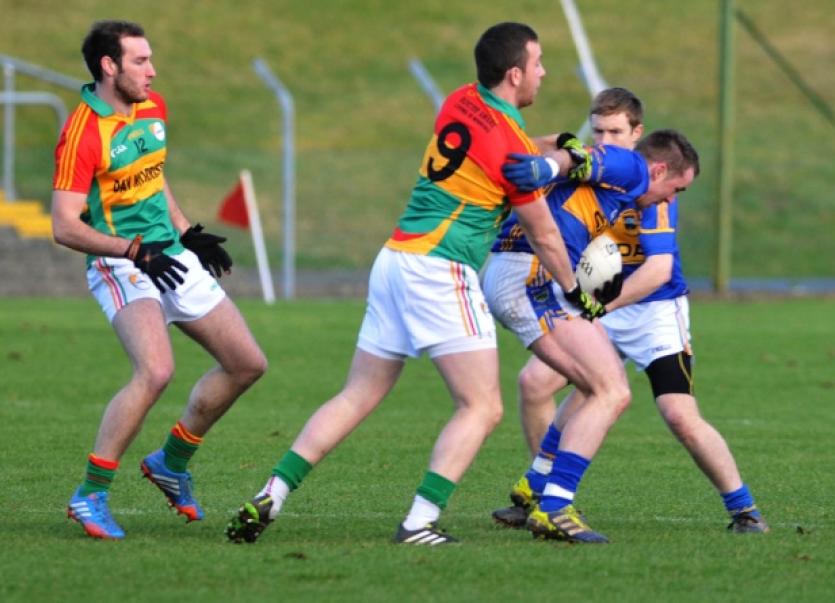 The team and management will, no doubt, be happy with the league points secured, but it is the display that will give them most satisfaction. Having narrowly missed out on promotion last season after opening with two defeats, the Premier County were anxious to avoid a similar start this year, and they could not have been more emphatic in their demolition of Carlow.

Right from the outset, on a perfect day for football, Peter Creedon’s charges went about their business with intent. They opened the scoring after only 23 seconds when Donagh Leahy got forward to point and were 0-2 to 0-0 to the good within 90 seconds of the start following Conor Sweeney’s first of eight points, the Ballyporeen man skilfully kicking a point from off the ground.

It was shaping up to be a decent game with Carlow quickly settling and after eight minutes the visitors led by 0-4 to 0-2 with points for Carlow from Brendan Murphy and Graham Power to equalise before a Barry Grogan free and a point from Tyrone man Conal McCullough, on his competitive debut, restored Tipp’s two point advantage.

Disaster then struck for Carlow when in an off-the-ball incident with Andrew Morrissey, Paul Broderick received a straight red, with the Galtee Rovers man yellow carded.

For the remainder of the game Tipperary were to dominate and having been in an almost identical position last year in Semple Stadium - with a lead and numerical advantage - Tipp were in no mood to repeat the wastefulness of 12 months back.

Between the dismissal and half-time Tipperary added eight points to Carlow’s two and led at the interval, comfortably but not flatteringly, by 0-12 to 0-4.

The procession of first half points came from Philip Austin, Donagh Leahy, Conor Sweeney (4, one free), Andrew Morrissey and Barry Grogan (free) with Carlow’s two scores coming from a Daniel St. Ledger free and a goal chance right on half time which Graham Power blasted over when one-on-one with Paul Fitzgerald.

Scoring aside, there was a lot to be admired in Tipp’s attitude towards work rate and the support play up and down, attacking and defending. Any space that Carlow created was being quickly swallowed up by a very focusedTipp.

Perhaps the best point of the first half came in the 16th minute. Peter Acheson intercepted a Carlow move out of defence and exchanged twice in a flowing movement with Philip Austin before the Borrisokane man pointed. It was Tipperary in full flow and Carlow were evidently all at sea.

A second half penalty converted by Seamus Kinsella in the 44th minute after Andrew Morrissey was unlucky to be penalised, reduced the deficit to six points at 0-14 to 1-5. It was the nearest the Leinster side were to get to Tipperary in the second half.

Quickly the visitors upped the pace again and goals from Philip Austin in the 49th minute after good work from Sweeney, and from Sweeney himself when finishing off a four man move involving Brian Fox, Michael Quinlivan and Barry Grogan, were no more than their industry deserved.

Tipp went on to use their full complement of six subs over the 70 minutes with the subs very keen to impress.

The Tipp points in the second half came from Grogan (4), Sweeney (3), Quinlivan, Aldo Matassa, Ian Fahey, Ger Hally, and eventually the ever-involved Acheson managing to raise a white flag.

Sunday’s encouraging start to this year’s league campaign was an impressive team effort with all 21 playing their part but the likes of Andrew Morrissey, Ger Mulhair, Peter Acheson, Barry Grogan, Conor Sweeney and Philip Austin did that little bit extra.

While the team and management will enjoy the win for what it is, Tipperary will know that sterner tests lie ahead, starting in Clonmel v Waterford on Sunday next. It promises to be a cracker and hopefully a good sized crowd with turn up on the day.