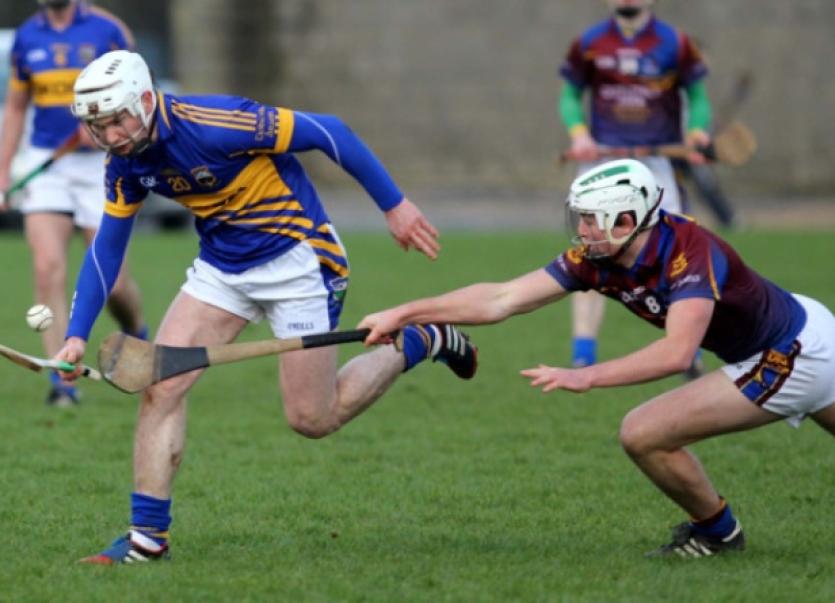 The weather may be stormy but there’s no shortage of hurling action.

The weather may be stormy but there’s no shortage of hurling action.

It was another busy weekend for Tipperary who lost narrowly to Cork on Saturday but did the needful on Sunday against a short-staffed UL outfit.

That result sets up a real season appetiser this Friday at Sixmilebridge in a Crystal final against Davy and co.

Yes, one senses that the preliminaries are over now and we’re into more serious engagement. The Waterford Crystal Trophy may be low on the list of priorities but a clash with the new All Ireland champions will certainly stir the blood even at this early stage of the season. The old order versus the new should produce quite a zestful collision. Our visa to this final was softly earned against a UL side that bore little resemblance to that which beat UCD midweek in the Fitzgibbon. It meant of course that Tipperary could be experimental too with players like Clonoulty’s Padraig Heffernan, Moycarkey’s Kieran Morris and Ruairi Gleeson of Kildangan all getting a taster at this level.

The details of the game are easily recorded. At half time we led by a dozen, which was exactly the amount contributed by ‘Bubbles’ O’Dwyer who hit 1-9 in that period, 1-3 from play. It remained a free-wheeling, point-prolific game in the second half. The students did keep plugging away, urged on by Eoin Brislane on the sideline. Kilkenny’s Padraig Walsh came on and significantly bolstered their effort. Eventually they hit twenty-two points, eight short of our total though we had two supplementary goals, Conor Kenny getting the second near the end.

One is wary of interpreting too much from these games but at this stage they’re all we have to go on. Shane McGrath had another profitable outing at wing back where he’s enjoyed something of a springtime renaissance. Whether the impact will hold when bigger questions are asked is another matter. Corner back, Jack Peters of Kilruane, is quietly earning respect also through this series of games.

Mikey Cahill was midfield on Sunday and heavily involved. He’s one of our finest but you just wonder is he being shunted around too much, a victim of his own versatility. Speaking of versatility Kieran Bergin has been relocated as well, sent up-field to add steel to a half forward line that was noticeably lacking in spine last summer. He brought the best save of the day from Shane Hassett in the first half.

Seamie Callanan and David Collins both took knocks and were withdrawn, the latter seemed to be the more serious going over on an ankle. We introduced five subs. James Logue saw action in the second half when he replaced Darragh Egan; he got nothing sharp to block but coped well with a few awkward ones around his crossbar. Brendan Maher, Colm O’Riordan, Conor Kenny and Shane Bourke were the other introductions.

I didn’t see the Saturday game with Cork, instead enjoyed watching France put one over on the neighbours. Actually didn’t know about the game in Morris Park, which was something of a hush-hush affair. I’ll let someone else try to explain the need for the secrecy. Cork it seems were keener for the tie given their non-involvement in the Crystal series. Anthony Nash apparently was the difference with two strikes from those toss-ahead frees. Interesting to see will Congress adjust the rule governing those twenty-metre frees. Nash has simply reignited an issue that’s been there for ages. Declan Ryan used to threaten the health and safety of defenders with an identical style at club level, though, curiously, he was never utilised by the county. Anyway Sixmilebridge should be the first significant event of the new season for our hurlers. It’s a third successive meeting of the counties in the final. Last year we came up well short at the Stadium – worse even than the eight point end margin would indicate. That was our first exposure to the new-style Clare with its emphasis on speed and movement. We didn’t know then but it was a harbinger of things to come. The previous year Declan Ryan took a team to Sixmilebridge in March and they brought home the trophy. The margin was six. Brendan Cummins was captain for the day – Paul Curran for the year. Hopefully the trend of ‘away’ wins will continue on Friday. I haven’t a clue what line-out the management will opt for, their choices limited by injuries. One thing is for sure it will bear little resemblance to the side that won in 2012. On that occasion Cummins was fronted by Conor O’Brien, John Coghlan and Michael Cahill; at half back O’Mahony was in between the Maher brothers, Shane and Donagh; Woodlock and David Young patrolled midfield; Noel McGrath was half forward between Templederry pair, Gearoid Ryan and Adrian Ryan; on the full line we had John O’Neill, Brian O’Meara and Timmy Hammersley. How things have changed in two years!

Given the importance of the event I assume O’Shea and colleagues will opt for the strongest line-out possible. And the positioning of players will be as interesting as the personnel. Davy Fitzgerald started nine of his All Ireland team in the quarter-final win over Limerick. I suspect he might even have more on Friday because this is not a game he’ll want to lose. It has all the ingredients then for a stirring contest. Hopefully the weather obliges.

Just got word from the ever-efficient County Secretary of those much-anticipated county draws and there’s plenty of material for lively debate here. There are some interesting groupings in the top tier though remember that two go forward from each of these quartets. Nenagh and Clonoulty will be fancied to emerge from group A, though Roscrea and Templederry will have other notions. Group B should be quite open with Kildangan, Killenaule, Swans and Upperchurch. Group C looks very competitive with Loughmore, Annacarty, Toomevara and Moycarkey while the big two in group D are Borrisoleigh and Drom with Silvermines and Burgess completing the quartet. The second tier holds even more fascination because relegation will be on the minds of several of these teams. Group A looks quite open with Davins, Lorrha, Kickhams and Brackens. I think Group B is the real eye-catcher with Kilruane accompanying Cashel, Boherlahan and Holycross. The geographical proximity of the last three - with attendant local rivalries - makes this a fascinating group – expect some real dogfights in this one. Group C is a North\South affair with Borrisokane, Ballina, Mullinahone and Ballingarry while Group D could be the group of death for Cappawhite who face Sarsfields, Portroe and Moneygall.

Credit to the designers of the new pitch at Morris Park; it was in remarkable condition on Sunday despite the rain and the two games in twenty-four hours.