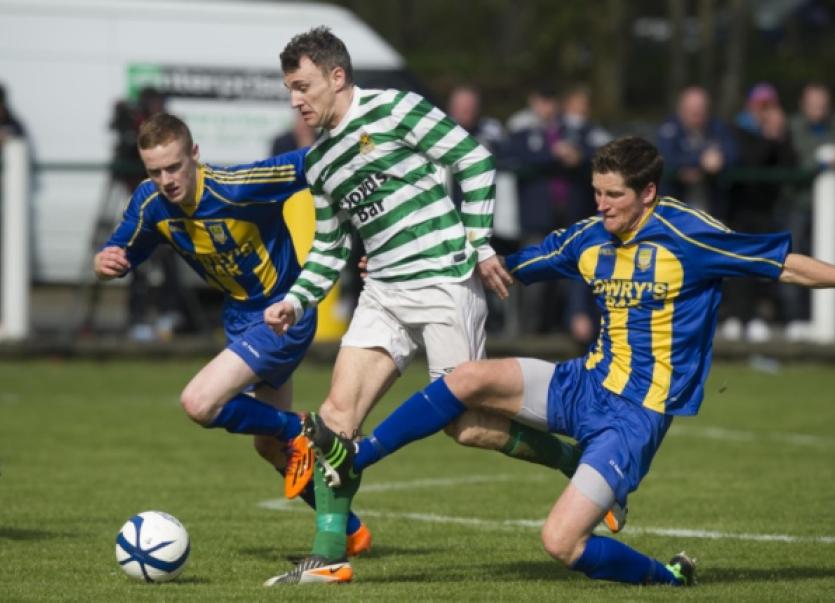 Not happy with the silverware they picked up last weekend for winning the First Division, Wilderness Rovers went in search of more, with a very strong performance in an easy semi-final victory over Bansha Celtic on Sunday.

his game was effectively over within the first half hour, as the visitors went on a goal scoring rampage, leaving the home side with a mountain to climb after going three goals down in this time.

The first came after only seven minutes, who was left unmarked inside the Bansha area, and needed no invitation to fire home past the helpless keeper. Minutes later it was Ashley Keane who found himself in space, and he tapped home as the Bansha defence now looked all at sea.

On the half hour, Rovers got their third, this time from the head of Niall Kelly as by now the visitors looked like they were running rampant over their opponents.

In fairness though, Bansha didn’t immediately fold, and five minutes later, were awarded a penalty which was despatched by Shane Ferris, to give them some hope in the tie.

Unfortunately for the home side, whatever hope the penalty had given them was extinguished immediately, as straight from the kick off, Ross Condon lobbed the home keeper to re-establish their Wilderness Rover’ three goal cushion. The Clonmel side kept this to half time, and the second half turned into a niggly, bad termpered affair, capped near the finish by a number of sending’s off for the home side.

All in all though, this was a much deserved win by Wilderness, who will now be looking at doing the double for their year.

Cullen Lattin advanced to their second Cup final in the next number of weeks with a hard fought victory over Division Two champions Kilsheelan United, to line themselves up for some end of season silverware.

They started the game brightly, carving out some good chances, but were unable to get an opening goal which would have settled the team down. Instead, it was the lower division opponents who opened the scoring, when Kilsheelan scrambled a corner over the line in the thirty fifth minute, to the consternation of the home defence and their supporters.

Knocked back by this, the home side almost conceded a second goal shortly afterwards, when they had to call upon goalkeeper Ger Ryan to make a brilliant save and keep their final hopes alive. Happy to get to the break only one down, Cullen regrouped and started the second half well, but they still took ten minutes to break down the United defence and get an equaliser, when Davy Ryan calmly finished in the 55th minute.

Almost immediately though, they let Kilsheelan almost back into the lead, when a shot cannoned off the crossbar with Ryan well beaten.

The turning point in the game came 20 minutes before the end, when the vistors were reduced to ten men after one of their players was shown a second yellow card, and Cullen exploited the extra man shortly afterwards as Liam Murphy cut in from the right and fired home to put his team in front.

From there to the end, it was a case of calm heads and a well marshalled defence cutting the chances of Kilsheelan replying to a minimum, and when the final whistle blew, the home side were celebrating their second final appearance of the season.