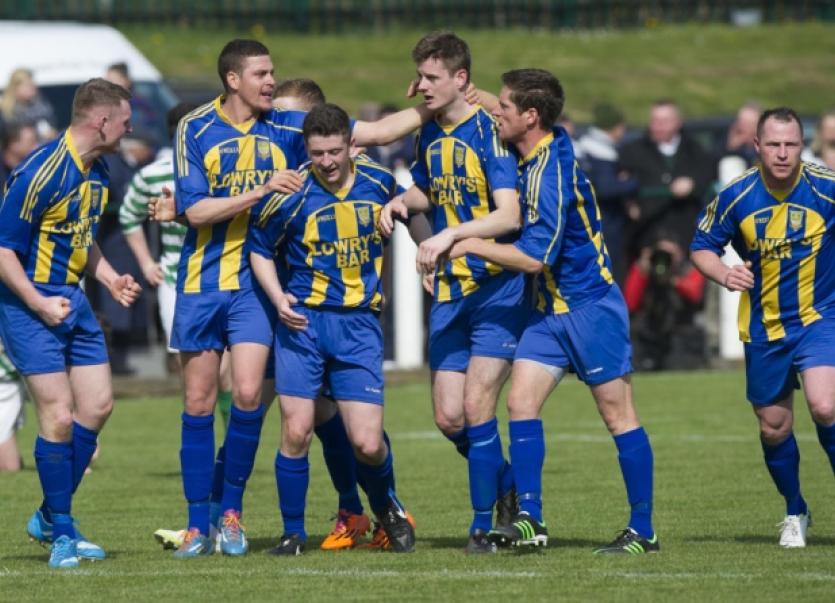 Tipperary’s first winners of Ireland’s premier Junior Cup competition will get a chance to lift the trophy for the second time in the club’s history,

Tipperary’s first winners of Ireland’s premier Junior Cup competition will get a chance to lift the trophy for the second time in the club’s history,

On Sunday last St. Michael’s of Tipperary Town put defending champions Sheriff YC of Dublin to the sword in an engrossing semi-final at the bypass in Clonmel on Sunday.

In front of a huge crowd, which included FAI supremo John Delaney, the Saint’s soaked up all the pressure exerted by the Dublin outfit, before unleashing a barrage of their own, to claim victory and a place in the Aviva Stadium in late May.

Weather conditions dominated the early parts of the game, as despite a beautiful sunny afternoon, a very stiff breeze blew down towards the Railway Station end for the duration of the game.

St. Michael’s faced this in the opening period, and the visitors attempted to take advantage with a number of long distance efforts, though never really troubling a very solid Aaron Wall in the St. Michael’s goal.

It was the 23rdminute before Sheriff YC created their first real chance, when Tony Kane opened up the Tipp Town defence with a beautiful through ball to Keith Dunne, but Wall showed all his experience by racing off the line to smother the chance.

Ten minutes later, Dunne had another chance when put through by Sean Murphy, but again Wall was off the line quickly, as the Saints’ defence began to creak a little. Creak they may have, but they never looked like breaking, as international trio Higgins, Walsh and Breen along with a man of the match performance by Brian Buckley, kept their prolific opponents at bay time and again, as well as being the springboard for most of the Michael’s attacks, which invariably went through wingers Russell Quirke and especially Jimmy Carr.

Carr was in fact a real thorn to the Sheriff YC defence, taking them on time and again every time he got the ball at his feet. The first half finished then, with a glimmer of a chance to Sheriff, when Joe O’Neill’s corner was headed over the bar from close range.

The second half was a different affair as the Saints with the wind at their back, became a lot more adventurous. Carr and Quirke were now rampant and began to tear their opposite numbers apart on the wings and create all sorts of bother for the Sheriff defence. They were also able to bring their big guns up from the back at set pieces and this almost paid dividends on the hour mark when Paul Breen headed inches wide from a Russell Quirke cross.

The next part in the drama came not from a promising piece of play, but when St. Michael’s keeper Aaron Wall had to leave the pitch with an injury, and Sheriff began to sense a weakness at the heart of their opponents defence. They were mistaken however, as replacement keeper Mark Lowry handled just as well as the player he replaced, and gave no chances up for the remainder of the game.

Moving into the last ten minutes then, it seemed as if all the excitement of the occasion had got to both sets of players, and it looked like it was fizzling out towards extra time and possibly even penalties.

In fact, the drama had only begun. For all the attacking power on both teams, it was a defender who showed the crowd what a top class finish looked like, as the Saints Brian Buckley came up from the left back position, and stole the ball from Paul Murphy before seeming to look up for an onrushing striker to cross to. But it was merely a sleight of hand on Buckley’s behalf, as instead of a cross, he floated the most delicate and delicious chip over the stranded Peter Halpin in the Sheriff YC goal to put his team in front with only six minutes left on the clock. This was the start of a few minutes of mayhem, as the visitors attempting to get back into the game, were opened up by a flying Jimmy Carr, who could only be stopped by a terrible tackle and a straight red card was shown to Sheriff’s Paul Murphy.

Things got worse for the Dubliners a minute later, when Anto Kavanagh got into an altercation with Russell Quirke and he too was sent to the line, leaving Sheriff YC with only nine men as their title challenge ebbed away.

During all this mayhem, St. Michael’s kept cool, and the final whistle unleashed a furore of joyous celebration and an invite to the Aviva in May.

This was a well-deserved victory, and with Ballynanty Rovers awaiting them now, there remains only one step more for this team to assume the legendary status of the team of ’74.