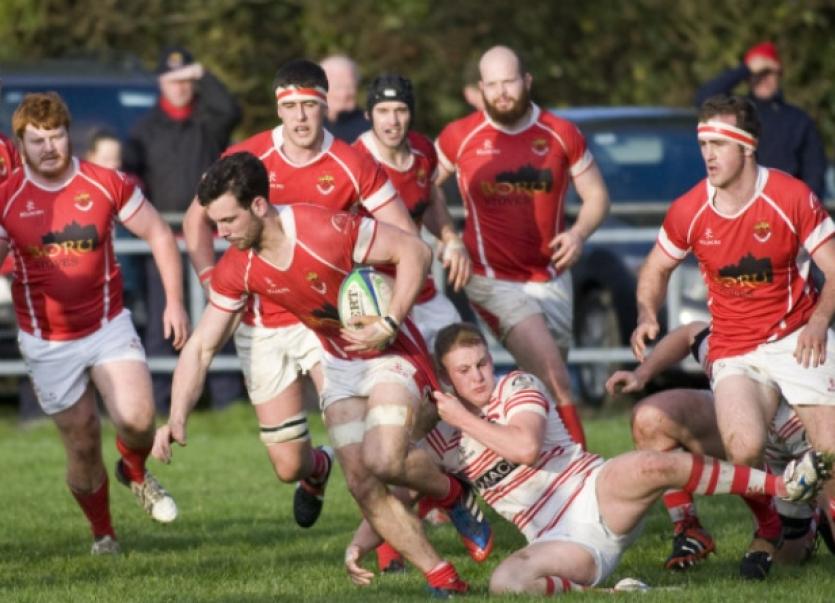 Spafield was not the place for the fainthearted, both on and off the field, on Saturday last as Cashel and Nenagh played a teak tough and pulsating AIL game in perfect conditions before a large crowd.

Spafield was not the place for the fainthearted, both on and off the field, on Saturday last as Cashel and Nenagh played a teak tough and pulsating AIL game in perfect conditions before a large crowd.

It was a game that ebbed and flowed from the first second until the final whistle with the result in doubt up to the very end when Nenagh almost grasped a try which if scored and converted would have levelled the game.

There was much more at stake for both teams than the Tipperary bragging rights as valuable points and league positions were at stake and at the end of the day Nenagh were in 7th position and Cashel in 8th, both with 12 points.

Prior to the game Cashel made a change at hooker where Michael Kelly replaced the injured Niall Fitzgerald and Brian Silke came into the centre for Zack Stryffler.

The first half for the most part belonged to Cashel as the pack went toe to toe with the larger Nenagh eight and they drew first blood with a Darragh O’Brien penalty after 5 minutes and he added a further 3 points seven minutes later with another penalty given for a high tackle.

The intensity of the Cashel play was admirable with the big ball carriers using all their energies to keep the pressure on Nenagh. The Nenagh defence was stubborn and not easy to break down but Cashel kept the pressure on with Aidan Barron and Ben Swindlehurst keeping them pinned back with clever kicks to the corner. The scrums were evenly contested but Cashel had a slight upper hand in the lineouts.

The big breakthrough came in the 25th minute when after intense forward pressure Cashel ran from 15 metres out, the ball went though the backs and as Silke was hit he put in an overhead pass to Cedric Unholtz who scored a hard earned and well deserved try which O’Brien converted putting Cashel 13-0 ahead.

This seemed to spur Nenagh on to greater efforts and they applied intense pressure on Cashel for a number of minutes but the hard tackles went in and no try was conceded. Cashel cleared their lines and on 32 minutes Darragh O’Brien put them further ahead with a huge kick from just inside half way. Nenagh had the final say in the first half with a penalty. Half time score 16-3. This reflected Cashels’ superiority in that first half.

The half time score may have lulled Cashel into a false sense of security but something triggered in the hearts of the Nenagh players and they commenced the second half with a new determination. Their pack took the game to Cashel and carried ball after ball deep into Cashel territory. The penalty count began to go against Cashel and Nenagh kicked two penalties to narrow the gap.

At this point the tackling by both teams was ferocious and the intensity of play kept the large crowd entertained. On 59 minutes Nenagh narrowed the gap to just four points with a penalty and the Cashel supporters began to get nervous.

However the team rallied and brought play into the Nenagh 22, they were awarded a penalty and Darragh O’Brien put seven points between the teams again.

THREW EVERYTHING AT CASHEL

Once again Nenagh rallied and for the next 10 minutes they threw everything they had at Cashel. It must be said that this was as intense a period of pressure that Cashel faced in the league so far but they tackled with bravery and organisation and absorbed everything thrown at them.

They lifted the siege and brought play to half way. With seconds left on the clock Nenagh got possession outside the Cashel 22, their outhalf put a clever kick into the corner and suddenly it was a race between their winger and Cashels’ Pat O’Connor and Darragh O’Brien. O’Connor won the race, the final whistle went and all of Cashel breathed a great sigh of relief.

This was a high quality game contested by two very well drilled teams with passion, skill and determination. Both can be proud of their performances.

Nenagh will be disappointed to have lost and it is no consolation that they contributed to a great local derby. Cashel will be pleased to have moved up three places in the league table. Next week Cashel play UCC at Spafield and it promises to be another tough assignment.