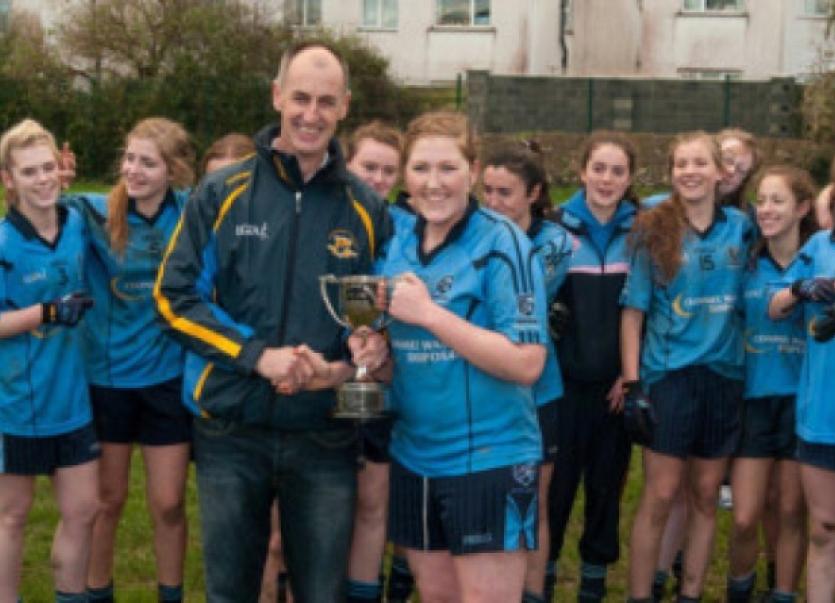 Moyle Rovers and Clonmel Commercials won County Minor titles at the weekend, Rovers winning the ‘A’ grade with a 2-8 to 1-3 win over Brian Borus in the final, and Commercials proving too strong for Cappawhite in the ‘B’ decider, winning 5-9 to 2-11

Moyle Rovers and Clonmel Commercials won County Minor titles at the weekend, Rovers winning the ‘A’ grade with a 2-8 to 1-3 win over Brian Borus in the final, and Commercials proving too strong for Cappawhite in the ‘B’ decider, winning 5-9 to 2-11

Duneske, Cahir was the venue for the Minor A between Brian Borus and Moyle Rovers on Sunday last. These two teams had met before in the round games with Moyle Rovers having the upper hand but still supporters were looking forward to an entertaining final.

As the whistle blew for the start of the game the heavens opened but this did not deter Moyle Rovers as Sarah Everard within the first minute pointed while for Brian Borus, Fiona Burke registered their first point in the sixth minute.

Everena Everard netted the ball for Moyle Rovers in the seventh minute and spectators may have thought they were in for a great game but conditions for the game deteriorated as the heavy rain continued. Neither team managed to score again until the 15th and 16th minutes when Sarah Everard would add two more points (one from a free) to Moyle Rovers score line. Both teams battled hard in the last quarter but for Brian Borus, Caoimhe Condon would have the final point of the half to go in at half time Moyle Rovers 1-3 Brian Borus 0-2.

During the break the rain passed over and the second half of the game was played under sunshin and again points were traded by both teams in the first five minutes. For the next fifteen minutes Brian Borus increased their dominance and held Moyle Rovers scoreless but a Sarah Everard point in the 50th minute re-established Moyle Rovers and they pushed on with points from Jenny Everard, Roisin McGrath and Caroline Quirke. Try as they might, scores evaded Brian Borus until, in the 63rd minute Helena Walsh raised the green flag for them bringing them to a five point margin. Jenny Everard capitalised from the kick out with a goal for Moyle Rovers to finish the game with eight points to spare. Moyle Rovers 2-8 Brian Borus 1-3

Clonmel Commercials were crowned County Minor B Ladies Football Champions following their seven point winning margin over a gallant Cappawhite team in Bansha on Saturday. These two teams had already met in the earlier rounds of this Championship playing out a thrilling draw. Saturday’s final was no different with very little separating the teams throughout an entertaining game that was somewhat disrupted by a number of stoppages for injuries in both halves.

Commercials were first to open the scoring despite playing against a fresh breeze and with less than two minutes played had scored a goal and a point from Siobhan Murchan and Saoirse McGeever before Cappawhite got into their stride.

Once Cappawhite settled however they put some nice passages together and narrowed the gap to two points with two converted frees from Blathnaid Cummins and Sinead Buckley. Siobhan Murchan then struck for her second goal but Cappawhite to their credit replied almost immediately with two of their own from Sinead Buckley and Jean Kelly. For the next ten minutes Cappawhite were on top making better use of possession opening up a three point lead before Commercials Sarah Ryan (point) and Zoe Farrell (goal) once more gave Commercials the lead. Cappawhite’s Kelly sisters, Elaine (Captain) from midfield and Jean in the half forward line combined beautifully with Jean adding two fine points to once more level the game. The final score of the first half, another Sinead Buckley point from a free left Cappawhite with a one point half time lead, 2-7 to 3-3.

Commercials struck for the first point of the second half which was almost immediately cancelled out by what was probably the point of the day from Commercials’ Sarah Ryan. Zoe Farrell then struck for a well taken goal and Commercials once more took a leadthey would hold from here on. Cappawhite’s Jean Kelly was playing well and added two nice points from play narrowing the gap. Commercials Dara Walsh (Captain) was now dominating the game more from midfield and was available again and again for her hard working backs linking up well with the Commercials forwards. Zoe Farrell and Sarah Ryan added two further points for Commercials with Kelly for Cappawhite scoring what would be for them their last score of the day with a point in the sixteenth minute. Another top class Sarah Ryan point from distance put Commercials two up and try as they might Cappawhite could not get the scores they now required.

An Aisling Deely goal with three minutes remaining sealed the victory for Commercials before another Ryan point from a free made certain of victory for the Clonmel team, 5-9 to 2-11.

This was a tough encounter between two well matched sides but on the day the Commercials forwards played better as an outfit with four of the starting forwards contributing from play. Cappawhite were dependant mainly on Sinead Buckley and Jean Kelly for their scores. Commercials larger panel told in the end when legs got tired and subs were required.