Dismissals, injury could make it an expensive victory 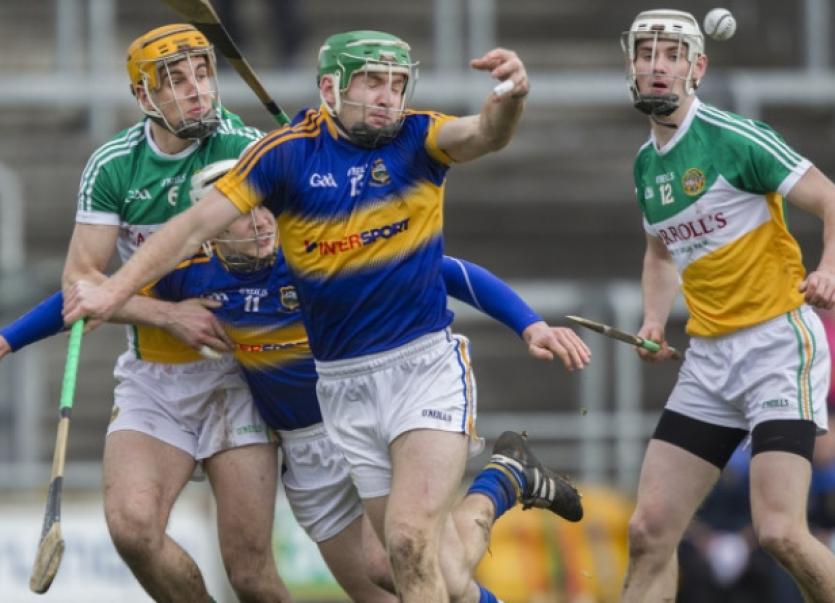 Tipperary’s expected progress to the league semi-final came with a high price in Tullamore on Sunday with a straight red card for star forward Seamus Callanan that will keep him out of the last four clash with neighbours Waterford.

Tipperary’s expected progress to the league semi-final came with a high price in Tullamore on Sunday with a straight red card for star forward Seamus Callanan that will keep him out of the last four clash with neighbours Waterford.

Callanan was harshly dismissed three minutes into the second half for an off the ball incident. He had been Tipp’s top forward in the first half when he scored 1-6, the goal a superb strike from a tight angle.

Tipp finished the game with thirteen players with Young Hurler of the Year Cathal Barrett sent to the line for a second yellow late in the game.

Callanan’s loss is compounded by the absence of Kieran Bergin for at least six weeks with ankle ligament damage. He was stretchered off after taking a heavy knock to the ankle and will be a big loss for the semi-final

They proved an expensive sidebar to a Tipperary win that was achieved with some ease against the team that finished fourth in Division 1B.

Trailing 1-14 to 0-4 at the break, Offaly upped their performance in the second half with the gale force wind behind them and seven points without reply brought them back to within touching distance of Tipp but they never looked likely to close the gap.

Tipperary managed just two points in the second half but the half time lead was sufficient cushion to see them cope with the gale and Callanan’s loss.

Last year’s Hurler of the Year contender reacted to a challenge from Offaly fullback Dermot Shortt and his immediate reaction indicated he knew he was in trouble - Wicklow ref John Keenan produced the card quickly after consulting with his umpire but it appeared a harsh decision against the Drom-Inch man.

Offaly had won the toss and strangely opted to play into the teeth of the elements but the move backfired. After a lively opening that produced little reward, they saw Tipp take control with Padraic and Ronan Maher dominant in the half back line, Bergin outstanding at midfield and chipping in with three points, and Callanan a huge threat upfront.

Bonner Maher started in place of ‘Bubbles’ O’Dwyer, who was still feeling the effects of some heavy treatment from the Cork defence a week earlier, and put himself about in typical fashion.

The breeze had a huge impact on the game before a crowd of over 4,000. Tipperary had the quality to fully exploit it in the first half and build up that handsome thirteen point lead.

Even with an extra man for most of the second half, Offaly just didn’t have the artillery to trouble the Tipp defence with an over-reliance on the skills of Shane Dooley.

Trailing by seven points, 1-16 to 0-12, with normal time nearly up, they had a chance to make it an exciting climax when a clumsy tackle saw Darragh Egan concede a penalty but the Kildangan keeper made amends with a fine save from Dooley’s shot.

After Callanan from a free and Dooley exchanged points in the first six minutes, Tipp went on to hit 1-6 without reply, Callanan’s goal an audacious strike from such an angle, with other standout moments the scoretaking of both Bergin and Brendan Maher.

Dooley had Offaly’s second score in the 22nd minute to make it 1-7 to 0-2 but again Tipp came back with five unanswered scores, with Offaly’s ploy of bringing Emmet Nolan back as an extra defender failing to stem the blue and gold tide. And as the home side’s discipline let them down, Callanan pointed three frees in a row.

The two dismissals, Bergin’s injury and playing into the teeth of the gale disrupted Tipperary’s flow in the second half, with just two points from Ronan Maher and Brendan Maher in the first fifteen minutes, but it proved to be job done for a side that went into the quarter finals as the hottest favourites of the weekend.

Next up it’s Waterford in the semi-final as part of a Nowlan Park double header on April 19.