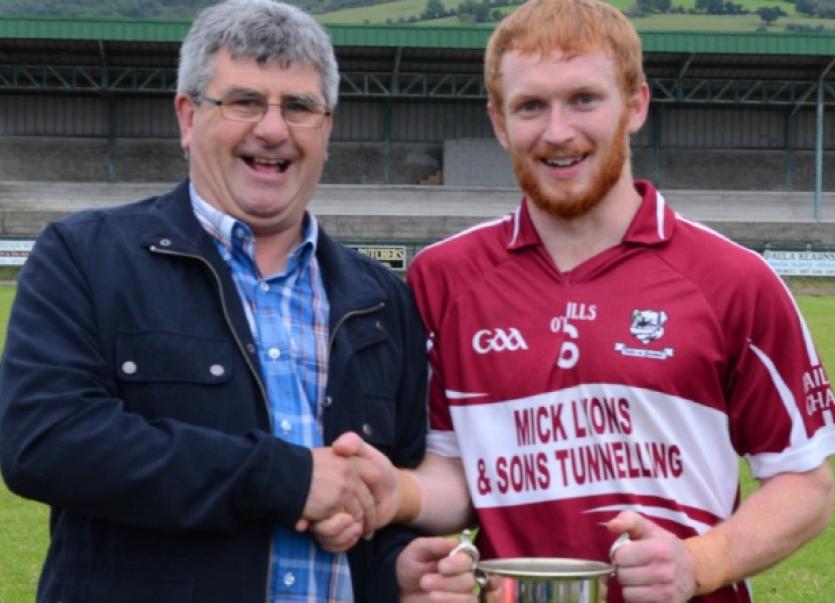 Ballingarry made it three-in-a-row when beating Newcastle in the Garrabridge Lighting South JFC ‘A’ final at Clonmel on Saturday, 1-12 to 1-8.

Ballingarry made it three-in-a-row when beating Newcastle in the Garrabridge Lighting South JFC ‘A’ final at Clonmel on Saturday, 1-12 to 1-8.

And it was a proud Board chairman Michael Cooney who presented the Dick Egan Cup to his home club after they secure victory with a storming finish that saw them score 1-1 in the final three minutes.

Newcastle scored first through Brian Sweeney from play after 5 minutes with Ian Ivors drawing the sides level with a fine point in the 10th minute.

Newcastle awarded a penalty in the 12th minute for a foul on Tommy Sweeney that was duly put away by Brian Sweeney. Tommy Sweeney pointed a free in the 17th minute to leave Newcastle very much in the driving seat, 1-2 to 0-1 ahead.

Ballingarry then stirred themselves and following fine passages of play they scored the next four points without - Dylan Wash pointed a free out of his hands, Adrian Cleere scored from an acute angle, James Logue hit the third and the fourth was an excellent free by Adrian Cleere almost on the touch line to bring the teams level on the stroke of half time, Newcastle 1-2 Ballingarry 0-5.

After the interval Ballingarry introduced Ger Ivors for Keith Cleere and he added the little bit extra of commitment and pace resulting in a point from a free 40m out by Adrian Cleere.

Newcastle put on a little extra effort and scored a fine point from Diarmuid Devaney, their first for 15 minutes this was shortly followed by an excellent point from JP O’Brien.

They also hit the post with a goal on but in the 40th minute Ballingarry drew level when Adrian Cleere pointed to leave the scores Ballingarry 0-7 Newcastle 1-4.

Newcastle edged ahead with an excellent individual point from corner forward Andrew Fitzpatrick after 45 minutes but James Logue brought the teams level again with a fine point from play.

Ballingarry were then awarded a penalty but Adrian Cleere’s shot was well saved by Darren Goonan at the expense of a 45.

An Adrian Cleere free from 40m edged Ballingarry ahead and when Diarmuid Devaney fired over an terrific point for Newcastle to draw level, 1-6 to 0- in the 53rd minute. it looked like we we were going to have a close finish.

The sides were still tied following an exchange of points from Dylan Walsh (Ballingarry) and Shane Hickey (Newcastle).

The sides swapped scores in injury time - Andrew Fitzpatrick for Newcastle and Cleere again for Ballingarry to cap off a fine individual scoring performance.

Best for Ballingarry were in defence Gerry Fitzgerald, captain Jack Fennely and sub Ger Ivors; in the middle Dickie Norton and Ian Ivors held the edge while up front Adrian Cleere, Dylan Walsh and James Logue were best.