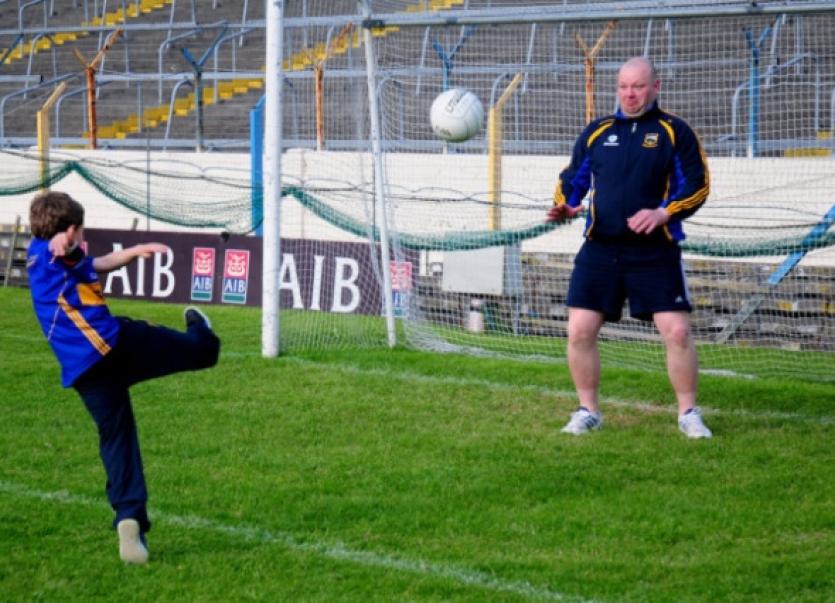 Notwithstanding the fact that The Premier County men must travel away to Shannonside to face the division 3 team - they will join them in the Allianz NFL group next season following promotion - and will probably not have the largest travelling support either, considering that the hurlers are playing on Sunday, the school Principal in St Ailbhe’s, Tipperary Town, is still confident that his charges can pass, what will be, a very stern examination of their credentials.

To the casual observer, it is probably not stretching it to suggest that Tipperary will be up against it when they travel to Limerick on Saturday. But, Peter Creedon and his management team have watched the progress and evolution of the squad from the near defeats last year, to the winning phase so far this season which has yielded promotion and division 4 silverware. They lost just one game in the NFL, and that came after promotion had been secured, and played some sublime football en-route to the final in Croke Park which saw Captain Paddy Codd coming away with the silverware. It was very satisfying to win the honours, but the real prize was promotion.

The league has been good to Tipp as Peter says, “We have gained a lot of confidence and a lot of momentum from the league and we have managed to keep our work ethic. We have also shown that we are now able to take a few knocks and still get back into games, which is very pleasing.”

Following Tipperary football fortunes dictates possession of a disposition capable of absorbing ‘knocks’ because there have been plenty of them. And, despite the fine successes achieved in minor and u-21 grades over the last five years or so, there are no guarantees that those’knocks’ will cease when the undergraduates comes of age. The conveyor belt must continues year on year in order to build a strong willed and spined senior team. Nobody is more acutely aware of this, than Peter Creedon.

“Underage success is very good and it all helps. But, how much underage success have Kerry had over the last thirty years and they can still produce fantastic adult teams. The reality is that if you can get a few players coming through from successful underage teams, you are doing well. Anybody who has been involved in teams will tell you that there is no comparison between underage preparation and adult teams. The big challenge for us is to take five or six of those players and see them through to the adult stage.

“The bigger picture is how players buy-in to what you are trying to do. We have a car coming out of Dublin three times a week for training. Those players want to do that. They love doing it because they enjoy each others company and they want to play for their county,” he says.

With only Philip Quirke and Donagh Leahy on the injured list, Tipp will travel with a lot of confidence to Limerick. Granted, Peter Creedon is at a bit of a loss as to why a double header with the hurling game was not facilitated, stating that such championship occasions make for very colourful days out for supporters. But, at the same time, he concedes that Tipperary footballers are well used to playing in front of small crowds and in situations where expectations are not of the highest order.

The draws made at the end of last year pitted Tipp against a team outside of Cork and Kerry for the first time in a number of years. That would have suggested a lift to the players - the fact that they would avoid a top top team in the first round. But, Peter does not buy-into that theory - not by a long shot.

“Our goal at the start of the year was to beat Carlow in the league first round. We took it one game at a time after that. We didn’t look at it and say, we are not playing Kerry or Cork in the championship, so let’s focus hard. If that is the reason you play inter county football, well then forget about it. You are not worth your salt, simple as that,” he says.

One very pleasing aspect of Tipperary’s league campaign was their free scoring flow. Admittedly, the black cards might have had something to do with that and while Peter expects that the championship will be toughter than anything Tipp have experienced so far this season, he is also confident that his men are ready to rumble with Limerick.

“Limerick maintained their league status very comfortably and it will be a very big step up for us on Saturday night. But, we are really looking forward to that challenge now. We see it as a very winnable game for us and a real chance to win a first round championship tie for the first time in 8/9 years. I think it is time to put that right at this stage. We have gotten out of division 4 and we want to be in division 2 by 2016. We’ll get a taste of what that level of competition is like next weekend,” Peter said.

A win would certainly be a major boost to Tipperary and would help get the Bank Holiday weekend off to a very positive start.