Alive, kicking and raring to go for the replay 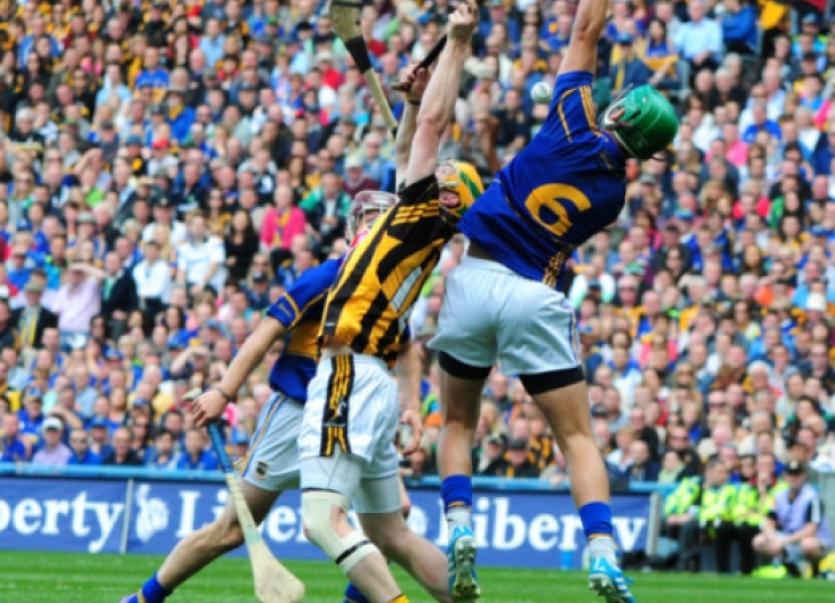 Tipperary are alive, kicking and raring to get another slap at Kilkenny in the All-Ireland senior hurling final replay on Saturday September 27th.

Tipperary are alive, kicking and raring to get another slap at Kilkenny in the All-Ireland senior hurling final replay on Saturday September 27th.

This is not a case of the glass being half empty for Tipp - it is very definitely half full and the positivity emanating from the camp on Sunday evening suggests only one thing - Tipperary will lash Kilkenny with even greater intensity than they did in Sunday’s game, in order to land the silverware.

Mind you, had a better conversion rate from the seven clearcut goal chances created in the game, materialised, there would be no need for a replay.

Similarly, had Kilkenny gone for the juglar when they had Tipp on the rack, it could have been curtains for Eamon O’Shea’s men.

All the superlatives in the English language have been used to describe this classic and attempting to analyse it seems futile enough, given the level of abandon with which the game was played. But, there were some telling facts nonetheless which go some way towards explaining the outcome.

The match-up’s were intriguing and they occurred all over the field. Kilkenny putting Richie Hogan in on Padraic Maher in the second half as the Sars’ man lorded it, was an inspired move. Hogan got five points in 17 minutes before Tipp placed Michael Cahill on him to stop the rot. It worked too as Kilkenny landed just 2 points in the closing fifteen minutes while Tipperary struck six to swing their way back to parity.

Tipp had just three of their 31 points from frees - an incredible statistic and when one considers that they only had three wides in the game, it shows how economical they were in possession.

Also, Tipperary created just one free inside their own half in the second period - that being the controvertial penalty - but ended up with no rewards for it.

Tipperary’s style of play in attack does not lend itself to winning frees with flowing movement and criss crossing of ball into space resulting in the minimal contact with opponents where possible. This accounts for so high a point tally and on a day when conditions were perfect for hurling, this allowed Tipperary to express themselves magnificently. A bad day, weather wise, could be a different story.

The really positive aspect of this game from a Tipp perspective is that they rallied after Kilkenny’s second half goals and didn’t drop the heads. They fired over points immediately after TJ Reid’s first minute strike after resumption through Shane McGrath, and again through Michael Cahill after Richie Power had bagged a 13 minute goal.

Those scores were crucial and didn’t allow Kilkenny the chance to build on their momentum. Almost immediately the effect of the goals was reduced and not only did this help Tipperary’s psyche, it set Kilkenny on the backfoot slightly after their big lift.

Credit to Kilkenny too though - they hit 3-17 from play in this remarkable game and apart from Hogan who snatched six of those from his midfield/half forward berth, they had real winners in TJ Reid and Richie Power.

Tipperary managed to contain the Fennelly brothers - Colin and Michael - doing likewise in the replay would be another major fillip for the Premier County.

Cody will surely be looking at his attacking formation for the replay and will perhaps worry at the fact that Tipperary created so many goal chances, eventhough they failed to take them. Granted, keeper Eoin Murphy justified his selection with a fine save from Bonner Maher, and defenders got back to make life hard for Tipp men about to pull the trigger. But, on other days, Tipp could have, and maybe should have, bagged seven goals.

Cody will challenge his men to tackle this head on - see how ferocious and obsessive they will be about preventing goal chances in the replay. They will take it as a personal slight, the suggestion that they may be vulnerable. They certainly seemed to be that on Sunday.

The workrate of both sets of players in this gripping encounter was phenomenal over the seventy minutes. It was end-to-end, one hundred miles and hour hurling and during that time 62 hooks and blocks were achieved - Kilkenny having the slight advantage at 32. This shows remarkable resolve from both sets of players and it really highlights how tuned in Tipperary were .

You would have expected Kilkenny to hit the workrate heights - Tipperary got to a level higher than they have done in four seasons, and displayed a hunger and single-mindedness that we have not seen for some time.

Tipp deserve enormous credit for their performance on Sunday. Hats off to the players and to the management team for getting close to their very best and to realising their full potential. There is still a bit to go and if the attitude in the team hotel after the game was anything to go by, they will not rest until the McCarthy Cup returns.

Now we are beginning to see the real Tipperary - the Tipperary we have craved and the performances we have begged from this group of hurlers. Now, we understand why criticism of early season was so severe and strong - the necessary level of application had been absent on match day, and while it might have been evident in the training field, it was not being transferred. Now it is though, and the key is to maintain the momentum, understand what is possible, and believe that the spoils of victory can be achieved. Sunday has proven that it is within inches of being grasped - and, in the normal course of events, All-Ireland titles are won by inches, not miles.

Expect the replay to be different. It will have a different atmosphere with the floodlights probably on, the tactics changed and the match-up’s revised. Expect Kilkenny to try and circumvent Tipperary’s scoretaking in some shape or form and to expose the defence, which was brilliant again on Sunday.

Thing is, Tipp will have plans too. And, they will follow them to the letter of the law as guided by O’Shea,the Professor of Economics.