I have absolute belief in my players - O’Shea 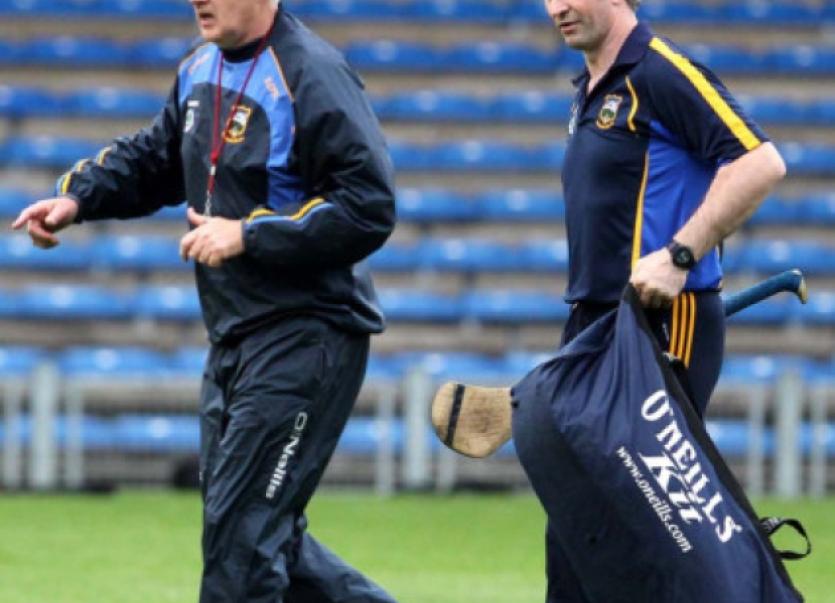 And, to add to the sense of self confidence, the Manager belives that the players have a very strong belief in themselves as they get ready for the clash with Cork in Sunday’s All-Ireland senior hurling semi-final at Croke Park.

These are strong statements from the Kilruane MacDonagh clubman, especially considering the roller coaster ride that Tipperary has been on during the season. But, Eamon and his Assistant Manager Michael Ryan (Upperchurch Drombane) told The Tipperary Star this week that they are seeing the kind of play in trianing from their squad which can captivate and enthrall - the trick now is to get match day form to default to training mode.

“The big exam is about to happen, there’s no doubt about that. We are up against very formidable oppostion who are the form team of the moment and whose play has been far more consistent than ours. They have brought in new players from last year including the likes of Aidan Walsh, Alan Cadogan, Mark Ellis and Damian Cahalane and they have grown as a group as a result of that in terms of where they want to be. And, of course, they have Jimmy Barry Murphy - a first class person and Manager down through the years and an iconic figure in Cork. We have to bring our A game to Croke Park to compete,” Eamon said.

Even at that, the A game - which we have yet to see over a sustained period of seventy minutes - might not be enough to down the Rebels. Tipperary will need to have absolutely everything going right for them and perhaps get a rub of the green as well as they lock horns for the first time with great rivals Cork in the All-Ireland semi-final.

Eamon, Michael and Paidi O’Neill have drafted in Bill Maher, Colin O’Riordan, John Meagher and Thossy Hamill to the senior squad from the U-21 set-up and admit that their job at the present time is as much about preparing teams for the future as it is preparing the team for Sunday’s game.

On the downside, the treatment room continues to be crowded with Liam McGrath (ankle ligaments), Niall O’Meara (foot injury), Conor O’Mahony (back), Michael Cahill (knee ligaments) and Paul Curran (hip) and John Meagher all still receiving attention as Sunday nears. Michael Cahill and O’Mahony might make the cut while the others are a bit further away from getting the all clear.

“We will not be interfering too much with our established fifteen and that is now out to 18/19 at the maximum in terms of starting and usually that comes to around 22/23 for the playing squad,” Michael says.

The management team has gone to extraordinary lengths to get the train back on the tracks following the defeat to Limerick in the Munster championship and the subsequent fallout. Michael Ryan admitted that he ‘ didn’t want to see any of the players’ for a few days afterwards, while Eamon O’Shea conceded that Kieran McGeaney played an important role in the rehabilitation of the psyche, although on a one-to-one basis rather than a collective one.

The triumvirate, dotted between Galway, Dublin and Upperchurch , regularly engage in conference calls to discuss important issues - usually about one a week - rather than prolonging training nights which are followed by long treks home for Paidi and Eamon. - “I’m still up at 7:00am for work every morning and if we stayed chatting for an hour after training, it would be 11pm before I leave Thurles. That’s not sustainable - you wouldn’t be long burning yourself out. I have a job to do as well and believe it or not, I don’t think about Tipperary hurling for eight hours a day while I am working. I can’t afford to because I have responsibilities elsewhere. The drive down to training after work means I am ready for hurling when I get to Thurles and the drive home means I am ready for sleep when I get back to Galway. That’s the way it is at the moment,”said Eamon as he gave an insight into the life of Tipperary Manager.

There was surely a lot of soul searching throughout the season but having gotten over Galway, Offaly and Dublin the confidence has returned to the team. Eamon stated that the Offaly victory should not be dismissed as irrelevant, while Michael added that Tipperary are capable of playing to a much higher level than they did against Dublin.

“We are happy with the preparations going into games which are getting incrementally difficult. But, we are capable of playing to a much higher standard than we showed against Dublin.”

Eamon added - “I still felt that whatever Dublin threw at us, we would have handled on the day. We were comfortable I felt.”

Tipperary now take on a Cork side, which, despite having had a five week layoff from the Munster Final, played two All-Ireland Finals in 2013. Yes, they have added a few new players, but they have experience of the big day. Tipperary have had five chamnpionship debutants this year so far with Darren Gleeson, Ronan Maher, Cathal Barrett, Niall O’Meara and Denis Maher all featuring at different stages. All except O’Meara are likely to feature on Sunday. The Croke Park factor will certainly have a bearing - it can be a daunting task for any newcomer and Eamon admitted that his frist trip there as a mentor in the early Sheedy era was a real eye opener. However, Michael added that there are plenty of experienced players in the squad to help the young guys get over this and let them know what to expect on the day. This should not be a factor come throw-in time on Sunday.

Michael admits to loving clashes with Cork. ‘They were our nemesis for many years and we grew up listening to stories of the many games between the counties. They are an ever-present menace and they have improved considerably from last year to this,” he says.

Tipperary’s voyage to the semi-final might have been a topsy turvy one, but they are there. All-Ireland champions Clare are not. Last years Leinster champions Dublin are not. This years glamour team Wexford are not. “You can argue that we are very lucky to be here and still standing as opposed to some of the teams who are not. The Tipperary public demand a team that they can follow and a team that they can cheer for. The relief in the stadium on the night we defeated Galway was all about that and our performance for the last 20 minutes was almost perfect, I would say. The fans really wanted it and wanted to players to take it on. They were willing them on and got the result. We are in the results business at the end of the day,” Michael said.

It will be all about the result on Sunday too. Tipperary have had a lot of glorious defeats in recent years and if victory is to come on Sunday wihtout the game having been a classic, well so be it. Semi-finals are all about winning - the loser goes home empty handed.

So. let’s get a bumper Tipperary attendance in Croke Park on Sunday and will the players and management team over the winning line. You will be playing your part in history by witnessing the first ever clash of the counties in the All-Ireland semi-final. More importantly you can play your part by being the sixteenth man on the team.