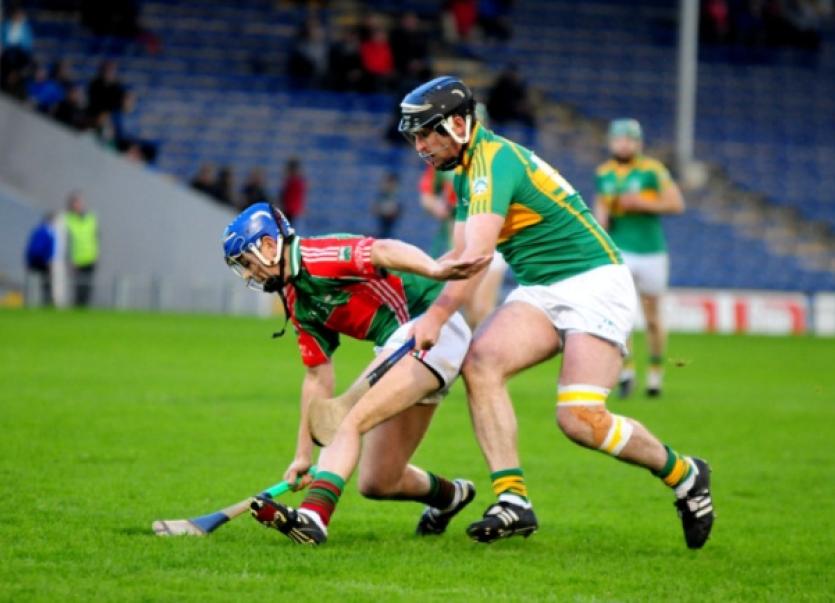 Champions Loughmore Castleiney had keeper Shane Nolan to thank for their slender victory over Clonoulty Rossmore in the Clean Ireland Recycling CSHC quarter final tie at Semple Stadium on Saturday.

The custodian made a magnificent double save right the death from sharpshooters John O’Neill and then Timmy Hammersley to keep the Clonoulty Rossmore lads at bay in what was a tight, close and tension filled finale to a game which was nip and tuck all the way.

The game, punctuated by a plethora of wides from both sides, failed to live up to the billing hurling wise, but certainly had thrills and spills, particularly in the closing stages. The initiative swayed this way and that and for the champions, they got over the line without ever really firing as they would have wished. Still, a win is a win and at this stage in the championship it’s all about winning.

Clonoulty Rossmore were certainly left kicking themselves. They had the chances to upset the bookies and with 11 wides in the second half alone, well, it tells it’s own story. They had started very well and had 1-1 on the board before Loughmore Castleiney got out of the blocks - their goal coming from Timmy Hammersley in the 5th minute after Nolan had saved from O’Neill, to go along with Hammerlseys game opener after 20 seconds.

But, Loughmore Castleiney swung into action and struck five of the next six scores with points from Liam McGrath (3), John McGrath and a sublime sideline cut from Noel McGrath coming either side of a Thomas Butler score for the westerners.

Timmy Hammersley had another point and when John O’Neill bagged a second goal in the 21st minute after Tom Butler and Hammersley combined, it was advantage to the challangers.

Within two minutes though the goal was wiped out - points from Noel McGrath, Liam McGrath and Liam Treacy doing the trick before Conor Hammersley and his brother Timmy came up trumps again for Clonoulty Rossmore. It took a fine save from Declan O’Dwyer in the Clonoulty Rossmore net from a Noel McGrath effort to preserve a 2-5 to 0-10 interval lead for his side with Liam McGrath hitting a brace from placed balls right at the whistle.

Loughmore Castleiney too had been guilty of squandering chances - they hit 10 first half wides into the Town End - Clonoulty Rossmore hit 11 into the same goal in the second half, and lost by a point.

2,027 attended the game and by the half way mark, most would have expected an upping of tempo for the second half. It took a while though and while the sides would be level on three occasions in the third quarter, Loughmore Castleiney pulled clear thereafter.

Aidan McGrath levelled the game upon resumption with a long range free, but John O’Keeffe had a great point to reclaim the lead for his side. John McGrath levelled again only to see Timmy Hammersley again earn a slight advantage for his side. But, from then onwards, the west men were unable to get back on terms again, try as they did.

Liam McGrath levelled with a pointed free in the 16th minute and Cian Hennessy shoved Loughmore Castleiney into the lead two minutes later. Liam (2) and John McGrath added further scores as Loughmore Castleiney turned the screw - they were now four up with four minutes of normal time to go. John O’Keeffe and Timmy Hammerlsey cut the deficit, just before Nolan pulled off his remarkable double save and though Hammersley again pointed in the 32nd minute from a free to leave one on it, Clonoulty Rossmore just could not get the equaliser - John O’Neill had a half chance but elected to pass and the opportunity went abegging.

Clonoulty Rossmore were out and it was a difficult one for them to take. A one point defeat always brings a lot of soul searching and no doubt the time since, and the coming weeks, will see them analysing and assessing where it went wrong. They can start by looking at missed chances, but will perhaps be disappointed not to have pushed on when they held the initiative. Best for them on the day were John O’Keeffe, Timmy and Conor Hammersley, Thomas Butler, Padraig Heffernan and John O’Neill, while Declan O’Dwyer made two top class saves.

Loughmore Castleiney survived. Like an old boxer on the ropes, they traded the blows, got in their hits, took a few more, but stayed on their feet. There was no knockout so to speak - they won this one on points. But, win they did, and they are quite brilliant at that. They weren’t spectacular; didn’t play particularly well; but still managed to grind out the win. The look ominously intent on retaining the Dan Breen Cup.

David Kennedy held the centre back position well, while Noel McGrath, Liam McGrath, Liam Treacy, John McGrath and Tom King were very prominent, and keeper Shane Nolan was in top form. Next up for the champs, Mullinahone, and the favourites tag for company again.